John Bribes Roman Into Taking Hattie Off His Hands

Thursday October 25, 2018: Lucas and Chloe are upset that Mimi's new lawyer is a friend, Hattie's getting bored of the hospital, and Marlena's getting better. 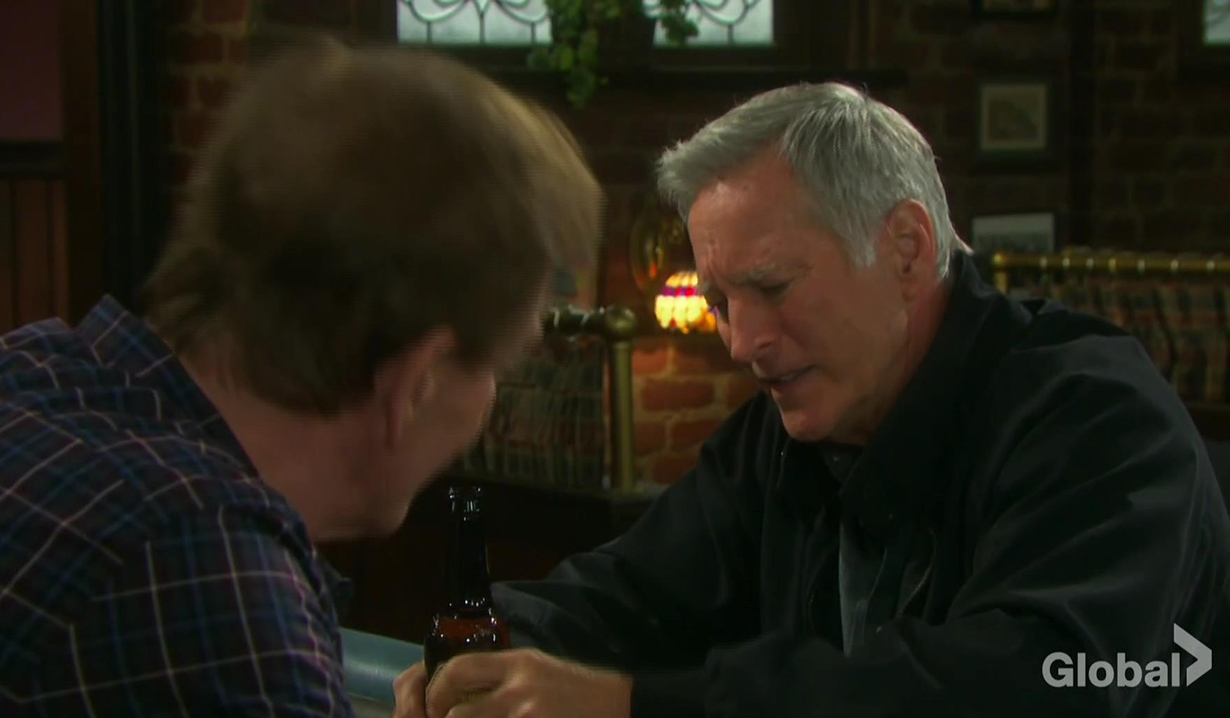 At Doug’s Place, Lucas and Chloe moon over Baby Bonnie and kiss. Lucas talks to Justin and learns Bonnie’s counter suing for custody. Chloe’s letdown. Lucas says they’re playing dirty, too and hired a real shark who will use his alcoholism against him.

At Mandalay, Mimi has no appetite because her kid is with Lucas. Bonnie eats Mimi’s pancakes and they argue over Mimi telling Belle everything. Mimi reminds her mom it’s confidential. Belle turns up and Bonnie’s hurt that she can’t go with them to talk to Lucas about the baby.

Kate is shocked to see Rex standing outside her door at Salem Inn. They hug and Rex tells her he has news. He hands over mint chocolates and admits he’s engaged. Kate isn’t happy. “You have to be joking,” she says. Later, Rex has told her that for the past year, he’s been dating a woman who is from Salem. Kate assumes it’s Mimi and has a meltdown until Rex says it’s not her. He brings up Lucas and Baby Bonnie and how he bonded with his niece. He realizes he wants kids someday. Kate again asks who the woman he’s dating is.

In the hospital, Hattie reads the Intruder and rants about being stuck in this “stupid hospital” while everyone else is having fun. She reads a spicy story that gets her laughing and texts someone. Meanwhile, in Marlena’s room, Kayla tells her friend she’s doing well and should be released soon. They worry Hattie will balk at going back to prison. Marlena tells her John has a plan that he’s putting into action now. Kay gets Marlena up and walking as they talk about the mystery patient that could be EJ. They can’t even ask anyone since Xander, Nicole and Kristen perished in the fire. They discuss Steve’s case. The ISA will keep him there until they can prove Stefan is to blame for making Steve’s bionic eye see confidential documents. Kay fills Doc in on Abby’s DID return and Marlena offers to see her but Abby won’t do it. Marlena thanks her friend for helping her. They hug and share a touching moment. Back in Hattie’s room, she’s thrilled when Bonnie shows up with junk food. Hattie read about her custody case in the Intruder. Bonnie fills her in on the whole story and Hattie gets it. They catch up about half the inmates they knew who are dead. Hattie calls her marriage to John “strictly phonetic,” but she won’t give it up. They gossip about horrible Anjelica and Bonnie wants to watch porn. Hattie says she already checked and the TV only shows news. Hattie admits she’s still stuck on Roman. Bonnie grins and gets it. Roman has a certain ruggedness though Bonnie still has her eye on Lucas. They drink to making their dreams come true.

At the pub, John gives Roman an Ernie Banks baseball card that Paul had. Roman’s grateful but knows it must come with strings. John plays dumb but then admits he needs a huge favor. He begs Roman to woo Hattie. “Take my wife. Please, take my wife.” John just wants to marry Doc. Roman jokes, “Haven’t you guys been married enough already?” He finally agrees to it but John will owe him big.

Belle and Mimi arrive at Doug’s place and Chloe’s upset to see Belle’s the shark. Chloe feels betrayed. Belle met with the judge and the court decided that Bonnie has visitation rights. They’re there to take the baby to see her mom. Chloe refuses. She thinks Bonnie will take off with the kid. Belle vows to ensure that wouldn’t happen. Mimi asks to hold her sister. Lucas allows it and she says, “Sweetheart, Mom… Mimi’s here.” Chloe remarks at how the baby has taken to her when they’ve barely spent time together. Mimi shrugs it off. Chloe tries to get Belle to drop the case. Doesn’t she know what it’ll do to Lucas? Belle just thinks the baby deserves to be with her mommy. They leave and Chloe assures Lucas she has faith that he’ll get custody.

Outside the pub, Mimi promises she’ll bring the baby back to Belle in an hour. Rex walks up and they look at each other awkwardly.

John arrives at the hospital and tells Kayla and Marlena that Roman’s going along with their plan. In Hattie’s room, Roman turns up sees the chips and booze. Roman is there to give her a burger. She sticks her head into the bag and inhales. “Heaven,” she marvels. Roman wanted to thank her for all she’s done. She’s grown on him like a weed. Hattie looks upset. He admits he’s kidding. She’s grown on him like a flower. A delicate, pretty one. Hattie ruins the moment. She starts having stomach pain and keels over and barfs into the burger bag.

Chloe finds Bonnie drinking at Mandalay and wonders why she’s not with the baby.