Monday October 22, 2018: There's an explosion and some people are hurt pretty badly. It doesn't look good for Nicole. Rex sees his brother and father, and Belle learns more about Rex and Mimi's hookup. 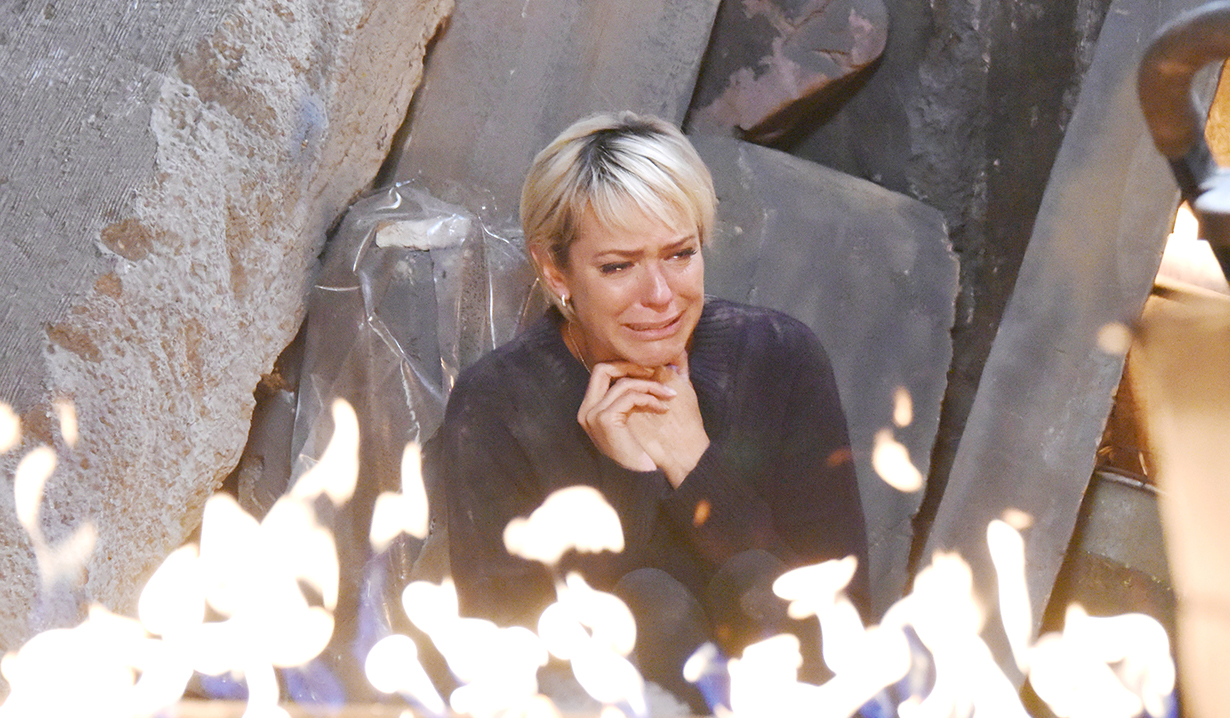 In Tennessee, after Nicole has knocked Xander out at his warehouse, she takes the recording of her confessing to murdering Deimos and goes to find Eric. Meanwhile, in the room marked ED, Brady hands his sister a set of keys and Sami uses them to lock him in and apologizes before she runs off. Nicole comes upon locked doors with initials such as VA, AD, AV, SD, ED, JD, WR, and wonders what they mean. She calls out for Eric and Brady hears her and asks her to let him out. Even if she wanted to, she can’t. He fills her in on Sami’s arrival and Nicole says she’ll send help once she finds Eric. In another room, Kristen tells Eric she needs Xander’s help. He has precious cargo that needs to be transported. Sami runs in and demands to be told where EJ is. When Kristen barks out a laugh, Sami attacks her. In a nearby laboratory, Dr. Rolf prepares a syringe in it for the mystery patient. He says the formula was far from perfected back then, so he knows he’s apprehensive about trying it again. He injects the patient and tells him Samantha Brady is there. The man jumps up and grabs Rolf’s lapels. “He’s back,” Rolf laughs. He knocks over a Bunsen burner by accident and yells, “Fire!” In the other lab, Xander strolls in, gun in hand, and Sami stops strangling Kristen. An explosion sounds, and everyone starts yelling. In all rooms, hell breaks loose. Xander and Kristen take off and Sami unties Eric, while Brady smells smoke and panics, and the patient’s face gets burned. Sami and Eric save Brady and Sami rushes to find EJ while the men attempt to get Nicole and Holly out from a pile of rubble. Holly fits through a hole and Brady runs out of the building with her while Eric and Nicole hold hands and profess their love for one another. Elsewhere, Kristen yells at Xander to save the patient but the fire is spreading and Xander refuses. Kristen runs around yelling Brady’s name. She finds him and the kid outside and tells him to dump the kid. She wants him back. Brady says no and Kristen vows he’ll be sorry. She runs back inside. Sami goes into the lab and calls EJ’s name. Rolf crawls out and tells Sami not to go inside. He races off and Sami finds EJ. She sobs. Brady returns to Nicole and Eric and Nic begs Eric to look after her daughter. Brady tries to drag Eric with him but he won’t leave without Nic. Brady finds a crowbar and hesitates. Later, Nicole sobs, knowing what’s coming, while Sami wheels EJ out in a wheelchair and Eric and Brady are outside. Eric wakes up and yells, “You hit me.” The door explodes outward. Rolf finds Kristen. She’s not afraid. Flames dance near her phoenix back tattoo.

In Mimi’s room at Salem Inn, Belle’s rocked to hear that Rex is Mimi’s baby daddy. Why didn’t she say something sooner? It’s not Mimi’s favorite subject. She thinks back to hiding her abortion from Rex the first time she became pregnant with his child and cries that it still haunts her. She recalls Lexi telling her the odds of conceiving were near zero, so when she heard she was pregnant again, she was grateful. She relays how she went to Chicago with a friend and that’s where she and Rex hooked up, but that Rex doesn’t know the baby is his. Belle’s amazed. Why not? Mimi says Rex was seeing someone and they were having problems. When she called to tell him the news, he told her he was engaged so she kept quiet. Belle thinks she’s making a mistake and assumes he’ll find out on his own. Mimi doubts it. She talks Belle into helping her retain custody of her daughter.

Roman’s stunned to see Rex at the Brady’s pub. The men embrace happily. Roman calls his son handsome like his old man. They reminisce about the Gemini Twins falling from the sky and how Shawn and Belle thought they were aliens. “I’m happy I turned out to be human and you turned out to be my dad.” Rex says Cassie was hesitant to return to Salem since she was stabbed, stuck in a Pinata and left for dead. Roman asks why he’s back now. Rex has big news. He’s engaged to a woman from a good family who was a resident in the same Chicago hospital as him. Before Rex can share her name, Lucas walks in with Baby Bonnie, thrilled to see Rex. The brothers embrace, and Lucas introduces Rex to “his niece.” Rex holds Baby Bonnie while Roman gets her a bottle. Rex learns the baby’s Bonnie Lockhart’s and almost chokes on his drink. Since it’s a long story, Roman interjects to share Rex’s engagement news. They drink to good news and Lucas lifts a bottle up to the men’s beers.

More: Outlandish storylines a concern for some viewers