Friday October 19, 2018: Eric learns information about what Kristen's up to, Nicole comes across rooms with initials on them, and Xander gets clocked over the head. 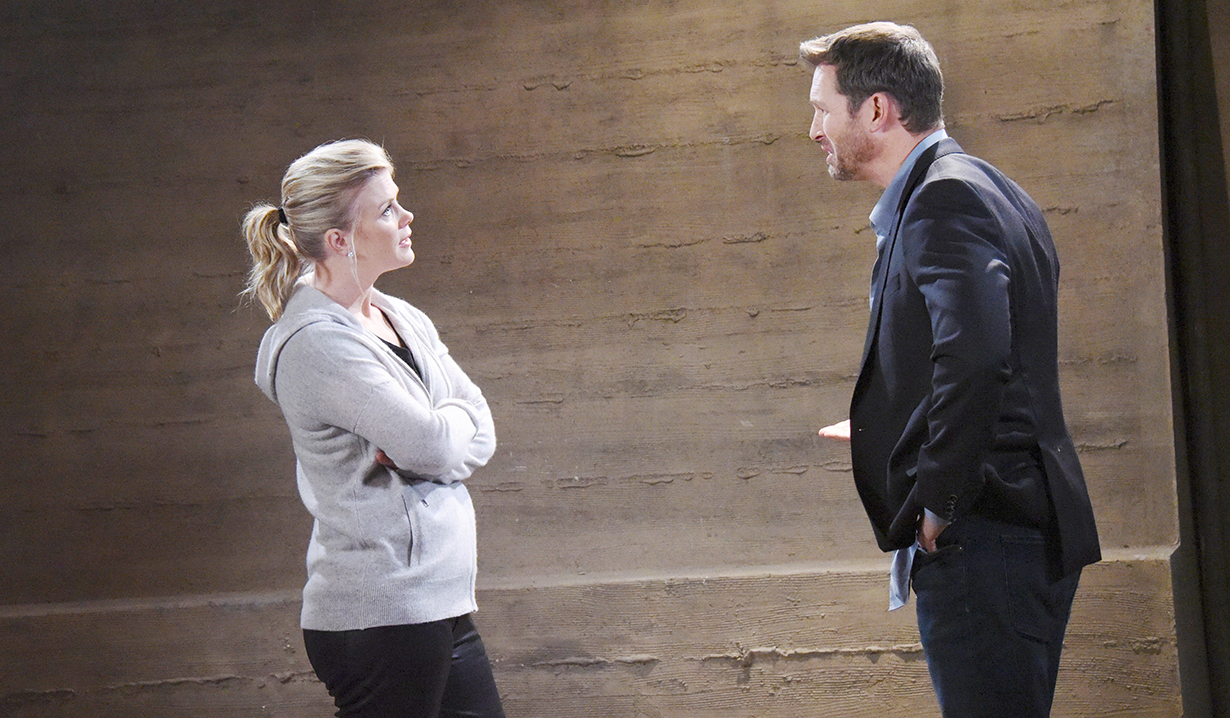 Chloe and Belle talk about Marlena’s recovery at Doug’s Place. Lucas strolls in with Baby Bonnie and tells Belle the story about Bonnie’s claims that the baby is his. Belle’s shocked to hear Mimi’s in town and tried to convince Chloe to drop the custody case. Chloe’s upset that Belle filled Mimi in on the custody case between her and Nicole. Belle’s sorry but they keep in touch all the time. They joke about high school days and Belle says both women are her friends. She doesn’t want to get stuck in the middle. Belle leaves.

At Salem Inn, Bonnie scarfs down baby food while Mimi rages about allowing Lucas and Chloe to be with her kid. She wants to call the cops but her mother threatens to turn her in for killing her father. Mimi can’t believe she’d do that. Bonnie didn’t want him dead. Mimi argues that she did so – he abused her! She rants about how Bonnie was a terrible mother. If Lucas sued for custody, he’d likely get it over Bonnie. Bonnie thinks they need a good lawyer to beat Justin. Mimi calls Belle to meet.

From the pub, Roman leaves a message for Eric to see how the search for Nicole is going.

In Tennessee, Xander returns home to Nicole and assumes she was expecting Eric, not him. He shows her the confession tape and fills her in that he dealt with Eric, who was trying to steal it. He’s not ready to give up on their marriage and suggests they grab some things and leave town. He’ll even let her say goodbye to Eric one last time. Once Eric’s dead, she’ll learn to love him. If not, he’ll send her to prison. At the warehouse, Sami finds the room marked E.D. to be empty, while Kristen finds Eric unconscious on the floor and ties him up in the chair Brady escaped from. Once he wakes up, Kristen taunts him and assumes Xander caught him trying to steal the confession tape. Kristen asks if Sami accompanied him there. He says nothing so she tells him Brady was tied up there before him. Eric’s stunned. He asks Kristen to let him be with Nicole, but Kristen thinks Nic and Xander deserve each other. Eric pleads to be let go but Kristen can’t risk him screwing up her plans. Eric asks if EJ’s alive. She says, yes, amongst others. Meanwhile, Brady, who has escaped, finds Sami, who accuses him of working with Kristen. Brady tries to explain but she won’t let him get a word in edgewise. When he’s finally able to talk, he explains he was playing Kristen. Sami blasts him for what he did to their brother but says once they get that confession tape from Xander they’ll live happily ever after. Brady plans on helping them make things right. Brady tells her there was a man in this room earlier. Sami asks if it was EJ but he never saw his face. Brady shows Sami a key and she uses it to lock Brady and takes off while Nicole finds locked doors marked V. A., W. R., A.D., A.V., and S.D.

Bonnie arrives at the pub. She wishes that she had enough money to dine. Roman spots her and thinks she’s Adrienne. She goes along with the lie and tells him she forgot her wallet. Roman agrees to put lunch on her tab but then later realizes that she’s really Bonnie. He kicks her out and she steals a drumstick before running out.

Belle meets Mimi at Salem Inn. Mimi asks her to represent her mother in the custody case against Lucas but Belle doesn’t want to be caught between two friends. Mimi admits the baby is hers. She confesses she killed her father, protecting her mother from his abuse and now her mom is threatening to out her if she doesn’t get custody for her. Belle agrees to help. Mimi admits Bonnie rolled the dice on the DNA and Lucas is related to the father. Belle asks if the baby’s Philip’s. Mimi says it’s another of Lucas’ brothers.

Lucas and Chloe take the baby for a walk in the square. Chloe feels lucky to be with a man like him. Adrienne walks up and Lucas accuses her of violating a restraining order. Bonnie takes Chloe aside to plead her case and hopes Chloe’s not trying to punish Mimi. Chloe’s confused at what this has to do with Mimi.

Nicole and Xander arrive at the warehouse with the baby. Nicole knocks Xander out. She finds the tape on him and then goes to find Eric, who is reading scripture about redemption to Kristen, hoping she’ll let him go. Kristen feels bad about what she has done to him before but she’s doing important work there.

Rex Brady walks into the pub and his father, Roman, beams with delight.

Stargirl's Meg DeLacy Previews Cindy's Return in Shadowlands Episode ('It Was Worth the Wait'), Unlikely Alliance