Eric Finds Nicole’s Confession Tape and Is Promptly Knocked Out

Thursday October 18, 2018: Abigail's distraught over seeing that Gabby has returned, Chad is stunned to hear Abigail attacked Gabi as one of her alts, and Sami and Eric team up to find EJ. 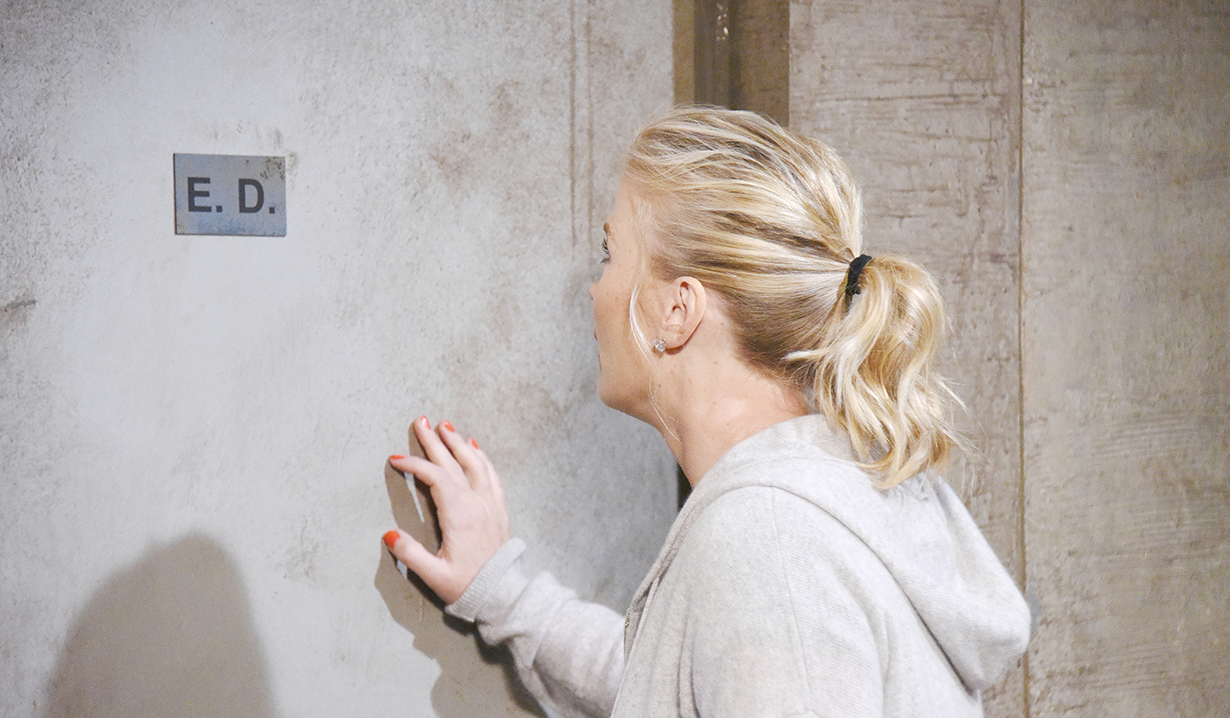 At the Kiriakis mansion, Gabi tells Chad that Gabby attacked her. Gabi explains she had Abby over to apologize for telling Chad about the text message to Stefan. She says Abby saw the wig and snapped and told Gabi she was Gabby. She took the wig and tried to go to Stefan’s. When Gabi attempted to stop her, Gabby trashed the room, then hit her over the head with the serving tray. Gabi knows it sounds crazy. Chad is skeptical. Gabi convinces him it’s true then he rushes to Stefan’s. Once he leaves, she calls Kate who rushes over and upon hearing Gabi’s story, looks disapproving. Gabi wants Kate to back her up but Kate won’t get her hands dirty. Gabi reminds her that Abby murdered her husband. Kate has too much to lose so Gabi threatens to tell Chad that she’s been disclosing confidential information about Titan to DiMera. Kate shakes her head. “What has happened to you?” Gabi sneers that Abigail happened.

Stefan finds Abigail on his sofa at the DiMera mansion. He calls her Gabby and confused, she says she’s Abigail. She’s distraught upon noticing her Gabby appearance, yet doesn’t believe Gabby is back. Last thing she recalls is having tea with Gabi who must have set her up. Chad wanders in, stunned at what he sees. Abby repeats her story.

Sami lets herself into Kristen’s hotel room at Salem Inn, brandishing a can of pepper spray.

The mystery patient at Xander’s warehouse croaks, “Samantha.” Meanwhile, in another area, Kristen finds Brady tied to a chair. She wakes him up, angry that he put Sami ahead of her. Brady reminds er she’s his sister but still thinks they can be together. Kristen doesn’t care. She’s going to leave Brady there. She kisses him, professes her love, then goes to the patient’s room. She says, “Sami,” then waits for a reaction, telling him he’s supposed to be better by now. She gets nothing and rants that Rolf brought Will back.

Eric stands outside of Sarah’s place in Tennessee and texts Nicole. She says to hide until Xander leaves. Xander appears, shirtless from the shower. She looks guilty and he threatens that she’d better not be talking to Eric. He dresses and threatens her. Outside, Eric calls Sami and she updates that she is searching Kristen’s room. She agrees to meet him after.

Back at the Inn, Sami sees the hotel manager, (played by David Ury), and shows him a photo. Is her famous friend staying there? He says yes, she was with a guy. He asks what she’s famous for. “Being a bitch,” Sami mumbles under her breath, then she calls Kristen an actress who plays the bad girl. Sami shows him photos of EJ but the fella the man saw her with was kissing her. She bribes the manager to let her stay for an hour and he takes $200 and leaves her to snoop. She finds Brady’s bag and wonders what the hell he’s doing. She leaves a message for Brady to call her then texts Eric to call. Eric listens at the door while inside, Xander comments that Nicole’s still resisting making their marriage real. He can’t fully trust her. Nicole offers to have dinner as a family. Xander wants a goodbye kiss. She kisses him on the cheek and he leaves before Eric rushes to Nicole for a quick and passionate kiss before he meets Sami.

Sami and Eric arrive at Xander’s warehouse, having followed him there. Sami explains she knows Kristen was with Brady. They wonder if Brady’s been working with Kristen. Meanwhile, Xander finds Brady, taunts him a little then goes to the patient’s room where Kristen tells him to stash Brady. Eric searches and finds Nicole’s confession tape. While he listens, Xander sneak attacks him. Meanwhile, Sami searches for EJ.

Kate arrives at Stefan’s and tells Chad that she saw Abigail leaving the Kiriakis mansion with the Gabby wig and followed her here. Abig ail doesn’t recall any of this. Stefan thinks this confirms that Gabby’s back.

Xander returns home to Nicole with a devilish look on his face.