Gabi Drugs Abigail Again and Feigns an Attack on Herself

Wednesday October 17, 2018: Tripp learns that Ben's applying for a job at Mandalay, Jennifer has a nasty run-in with Stefan, and Gabi steps up her plan to make Abby think she is not integrated. 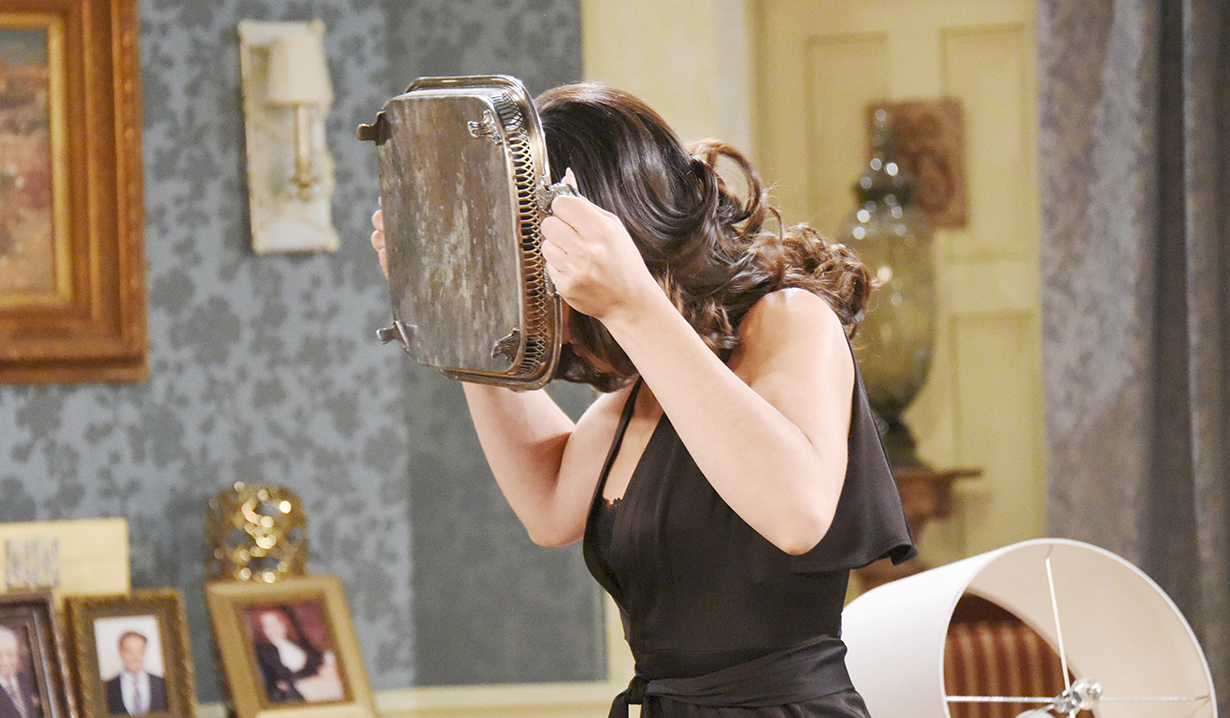 At SPD, it dawns on Hope that Ben planted the evidence himself in order to upend the investigation. Rafe considers that Ben knew that eventually they’d learn the fingerprint was transferred to the can and blame Hope who was determined to bring him down. Rafe’s angry that he played into Ben’s plan. Hope kisses him, thankful. This is a second chance for them to get “that bastard.” They need solid evidence.

At the square, Claire and Ben shake hands after agreeing to break up Ciara and Tripp so they can get what they want, just as Tripp and Ciara stroll up and question them. Claire said she’d put in a good word for him to work at the cafe. Ciara’s skeptical but Claire felt bad because the new evidence was phony. Tripp is uneasy. Claire goes with him to get takeout for the couple and Ciara learns Ben’s staying at the homeless shelter. He jokes that he waits half the amount of time to take a shower than at the loft and though it takes Ciara an hour to dry her hair, he knows she’s beautiful first thing in the morning. Later, Tripp and Ciara have gone and as Ben gets an application for the cafe, he decides he’s changed his mind about working together.

More: The bizarre yet funny side of Days of our Lives He’s not welcomed there but Stefan is concerned for Abs since she couldn’t meet with Dr. Evans. Jenn is reluctant to let him in but agrees to talk to him if he stops badgering her daughter. He asks why Abby didn’t see Marlena. Jenn says Marlena’s not up to it yet and Abby won’t see someone else. Stefan questions if she thinks Gabby is back. Jennifer resentfully admits that Chad found a black wig in Abby’s room. “A Gabby wig,” Stefan mutters, gleefully. He gets his phone out and Jenn grabs it. She doesn’t want him to act on this. She calls him sick and yells that he disgusts her. If he does anything to jeopardize her mental health he’ll be sorry. She gives him the boot.

Outside the Brady’s pub, JJ tells Chad that he thinks it’s possible Gabby isn’t back at all. In fact, he wonders if his sister is being set up by Gabi. JJ recalls that Gabi hired that guy Andrew to make Chad think she was being stalked while in high school. Chad recalls. JJ vows to get to the bottom of this.

At the Kiriakis manse, Gabi drugs Abigail’s tea and hides the wig and when she turns around, Abigail’s standing there. It’s obvious Abs hasn’t seen anything so Gabi offers the redhead tea and an apology about Chad searching her room and finding the wig. She feels it’s her fault because she told him about the text to Stefan. Abigail sips tea and warns that she’s not falling for this again. Gabi claims she was played by Stefan and Abigail asks point blank if she swears she’s not trying to come between her and Chad. Gabi swears and Abigail keeps sipping the drugged tea. Gabi calls herself her best friend. She’d never hurt her. Abigail starts touching her eyes and looks confused momentary. “I don’t believe you,” Abigail mumbles before passing out. Gabi’s pleased. She gets the black wig and puts it on Abby’s head and dresses her in a black sexy dress. She welcomes “Gabby” back and then takes Abby to the DiMera mansion where Abigail wakes up confused just as Stefan arrives home, shocked. He asks, “Gabby?”

Back at the Kiriakis mansion, Gabi upends the furniture and hits herself in the head with a serving tray to make it appear as if Abby has attacked her. She lies on the floor until Chad arrives and “wakes her up.” She claims Abby attacked her. (Click the photos below to enlarge them.)

Back at the loft, Tripp and Ciara eat takeout and Tripp is uncomfortable working with Ben if he gets a job at Mandalay. Ciara reminds him that Marlena agrees that he’s okay. Tripp says that may be so but it doesn’t mean he wants to befriend him. Ciara mentions he’s been abused as a child and has a good heart. They start joking around about Ben’s snoring and Ciara’s snoring and Ciara squirts his shirt with ketchup. Tripp complains that it’s his favorite shirt so Ciara says to take it off. He does and squirts her back and they laugh during their food fight and things take a passionate turn. They make out, then make love.

Back at Mandalay, Hope and Rafe turn up and Ben’s stunned to hear Hope wants to apologize. Ben says he wants to put this all behind him. Hope shakes his hand. Later, Hope tells Rafe that next time he won’t see her coming.

JJ arrives at Alice’s and Jennifer agonizes as she confesses to her son what she told Stefan. Now Jenn can’t find Abby.

Gabi tries to convince Chad of her attack.

Sami and Eric break into the warehouse.