Monday October 15, 2018: Kristen and Xander's secret is out, Sami attacks Nicole, thinking she is Kristen, and Chloe and Mimi argue over baby Bonnie. 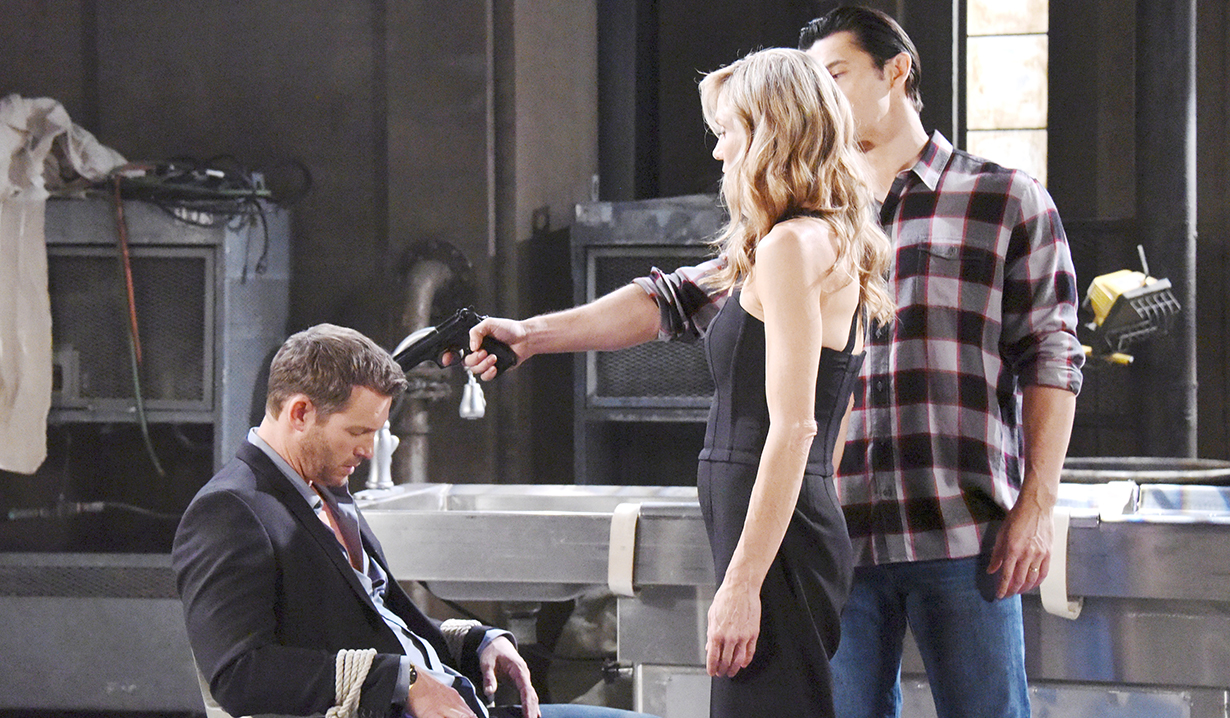 At Nicole’s place in Nashville, Eric and Nicole argue over whether or not Eric should follow Xander and snag the recordings. Nicole finally agrees to it but he can’t stay there or Xander will hurt him or expose her. They kiss passionately and he gives her a necklace for protection. A knock comes to the door. Eric hides as Nicole opens the door to Sami who promptly maces her. Nicole screams and Eric comes running then the twins look at each other and wonder what the other is doing there. Sami claims she thought it was Kristen. Stefan gave her this address and assumes “These two rotten sluts are working together!” She makes cracks about Nicole winding up with a homicidal maniac. Holly cries and Nicole goes to care for her daughter. When she returns, she explains to Sami exactly why she’s married to Xander. Sami agrees “that does suck.” Eric reveals Xander was trying to kill him – not Marlena and Sami still thinks he’s working with Kristen. Sami wants to call Rafe but Eric asks for one day. If he can get what Xander has on Nicole, he can probably find out if Kristen’s calling the shots.

Bonnie meets Lucas at Doug’s Place. He tells her he’s suing her for full custody. Bonnie tries talking him out of it but he’s adamant. She says it takes two to tango and he thinks she’s referring to their night of sex. Lucas is horrified, reminding her he was three sheets to the wind. Bonnie reminds him how he undressed her and made love to her. “What is that? From your favorite bodice ripper?” He doesn’t want to hear about that night again and won’t give her back the baby, assuming she’ll take off with her. Bonnie flashes to Mimi ordering her mom to get her kid back so they can both get out of dodge and Bonnie lies that she’d never do that. Lucas doesn’t believe her even when she turns on the tears.

At the park, Chloe sings to baby Bonnie until Mimi stomps over and demands that she give her the baby so her mother can take her and leave town. Chloe stands in front of the baby and tells her about Lucas’ plans to get full custody. Mimi is rocked at how much of a “bitch” Chloe still is since high school and barks that Lucas “isn’t even…” she trails off and Chloe questions her. Mimi covers then appeals to Chloe as a mother and though Chloe thaws a little, she can’t help her, knowing what kind of mother Bonnie is. Mimi reminds her she’s not the world’s best mother, and reminds her of how she stole Nicole’s baby. Chloe’s done with Meems’ bullying and takes off with her baby. Mimi growls that there’s no way “Ghoul Girl” is making off with her kid.

More: The unusual & ridiculous in Salem

At the Kiriakis house, Victor grumbles about his unwanted houseguest, Susan Banks. Eve saunters in and informs him that Brady knows the whole story about how they worked together and lost him custody of Tate. She can’t fix things between him and his grandson now. Victor’s sorry. He’s not her biggest fan, but Brady seems to love her and he knows she was only trying to protect Brady. He knows she loves Brady and is sorry. He forgives her. Eve thinks she’s in an alternative universe. He invites her to have a drink and she sucks it back and gets another, then shares that Eric knows about the recording of Nicole’s confession but reveals Brady doesn’t have it. Vic realizes Xander has the recording. Brady goes into a room marked E.D., looks in and says, “EJ,” while in another room, Kristen worries to Xander, having heard a noise. Xander investigates and finds a crow bar. “We have company,” Kristen says. Brady approaches the patient and Xander knocks him out with the crowbar. Kristen appears and frets. They tie him up. Xander leaves the room and Kristen throws water at Brady to wake him up. She’s angry that this was a ploy. He asks if the guy in the wheelchair is EJ. She ignores him. She knows he’s been lying to her. She cracks him in the head with the gun as Xander returns. He offers to finish Brady off. Kristen says no. Meanwhile, the patient croaks, “Samantha.” Lucas and Bonnie arguing at Doug’s Place. Mimi strolls in and tries to take the baby. Lucas stops her. Eli wanders in and tells Bonnie she’s going nowhere.