Brady’s Electrocuted While Trailing Kristen to a Meeting With Xander

Thursday October 11, 2018: Nicole and Eric plot, Sami makes Stefan an offer, and Roman and John deal with an escaped Hattie. 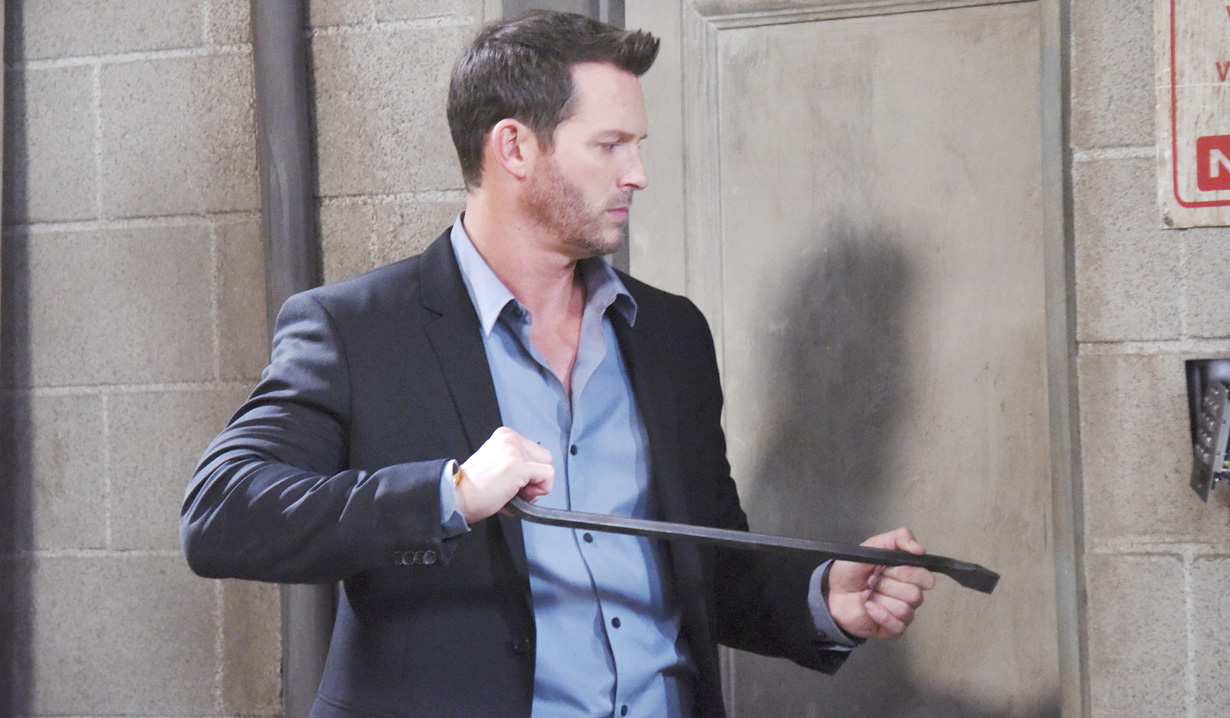 At the hospital, Kayla checks on Marlena, who hopes Hattie isn’t making trouble.

Roman is stunned when Hattie appears at the Brady Pub to see him. He insists they return to the hospital, but she begs for a cheeseburger or a movie date before being taken back. He refuses.

Sami confronts Stefan at the DiMera mansion. She knows he has money problems and offers to give him the cash he needs in exchange for information on EJ. Sami agrees to give him 125 million with an initial installment on good faith. She makes a call and transfers 63 million to his account. When he receives it, he reveals to Sami that EJ is alive. Stefano had Kristen go to the hospital and inject EJ with a drug the day he was shot, and she snuck him out. Stefano had fake ashes sent to Sami to convince her that EJ was dead. Sami asks where EJ is. Stefan says he’s recovering in a private facility, and he’ll tell her more when she gives him the rest of the money. She fumes because that wasn’t the deal, but he tells her to take it or leave it. She promises to find EJ one way or another and suspects he is afraid that if EJ comes back he will take DiMera Enterprises from him. Stefan scoffs because he came to Salem to connect with his family. She tells him to prove it and help her find EJ. Stefan admits he doesn’t know where EJ is and he’d tell her if he did. Sami goes to leave, but he stops her because he has something that may help her. Kristen scribbled an address down and he doesn’t know if it is connected to EJ or not. He hands it over and wants the rest of the money, but she says he’ll get it only when she finds EJ. He says that wasn’t the deal, but she smirks it is now. Kristen sneaks into a warehouse in Nashville as Brady trails her. The door is locked with a code and nothing he tries works. He tampers with the electrical panel and is jolted by an electrical shock. Inside, Kristen meets with Xander, who she hired to watch over the warehouse. She’s furious to learn he left to go crash the wedding in Salem and that he was the one who shot Marlena while trying to kill Eric. She screams that he could have blown everything if someone found this place. She questions if he’s loyal to her and has become too distracted by Nicole. He swears he is loyal to her because she gave him a job when his family turned their back on him. He’s kept her project safe, but Kristen explains there is more work to do. She reveals Brady is with her, which Xander is suspect of. Kristen believes he loves her, and she can trust him. She asks Xander to bring her the patient. He leaves, and she makes a call to Brady and leaves a message to check in and see how he’s doing. Back outside, Brady is out cold. Meanwhile, Xander unlocks a room with the initials E.D. on the door. At her apartment, Nicole thinks the only way out is to kill Xander. Eric refuses to let her do that, but she is desperate and scared. Holly wakes up crying, so Nicole brings her out from her room. Eric has missed the little girl, and he misses the idea of the life they were planning. Nicole knows Xander will never let her go and asks Eric to take Holly and raise her as his own because it’s the only way to keep her safe. He refuses seeing all she went through to be with her daughter, and he vows he’s never leaving her and Holly again. He thinks they need to find the recording, and he decides to follow Xander when he leaves the apartment next. Back at the hospital, John gets a text from Roman, who has brought Hattie back. John finds them back in her room and threatens to send Hattie back to prison. Roman has to leave but warns Hattie not to show up at the pub again. She thinks Roman is sexy when he’s angry but tells John not to be jealous because she’s committed to their marriage. John demands she sit in this bed, eat her Jell-O and start acting like she is his wife. Outside the room, Kayla and Roman discuss poor John being stuck with Hattie. Roman hopes they can annul the marriage. He tells Kayla he’s so proud of her and what she’s done to help Marlena seeing the tough time she’s going through. Kayla is optimistic that Shane will clear Steve’s name.