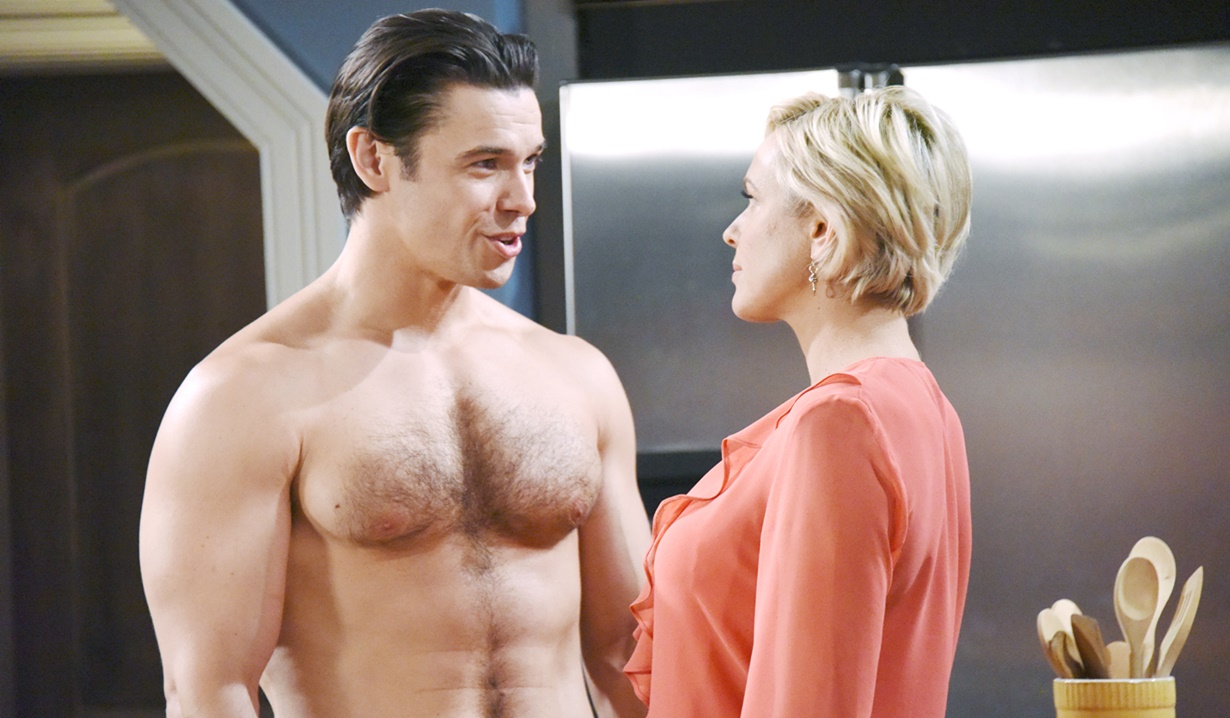 At the hospital, Hope congratulates John on getting married. He awkwardly thanks her, then tells her she can’t see Marlena right now because she’s downstairs for tests. Hope talks about how relieving it is Sami didn’t shoot her – she admits Sami’s involvement with Rafe may have clouded her judgement. Hope and John next puzzle over why Xander would shoot Marlena. Hope promises to keep looking for him.

Sami arrives at the SPD, and cheerfully greets Rafe with, “I told you I didn’t shoot my mom.” Sami complains she offered Stefan money for help locating EJ, but he wouldn’t tell her anything – she wants Rafe to bring him in on trumped-up charges and grill him. Rafe, amused, refuses. Sami pushes. Rafe still won’t do it. Sami pleads that the kids should grow up with their father. Rafe and Sami are in close proximity discussing the need to keep things legal when Hope enters. She surprises them by apologizing to Sami, who was innocent. She assures her they’ll bring Xander and Kristen to justice. Sami hurries out. Rafe grins at Hope. He’s surprised she didn’t tell Sami to stay out of the investigation. Hope shrugs – what would be the point.

Eve arrives at the DiMera mansion, where Stefan demands she explained the inflated numbers on the spreadsheets. He hollers about her recent poor results at the company and wonders why Brady’s late. Eve has no idea why. Stefan yells about the numbers being fraud, and Eve argues they were projections. Stefan demands she locate her boyfriend…now.

In the hotel, Kristen asks if Brady’s truly ready to leave his old life behind. Brady’s phone rings – it’s Eve. Kristen murmurs that it’s the moment of truth. Brady declines the call and complains the bitch cost him his son. Kristen nuzzles Brady and suggests she could help get Tate back to make up for her past mistakes. Brady won’t snatch Tate because Theresa’s a good mother. Kristen thinks they could raise Tate together, but Brady won’t remove him from his family. Kristen kisses him until he promises to consider it. Brady’s puzzled when she refers to some loose ends she has to tie up. Kristen asks him to trust her. She goes to shower, and Brady checks in with John. Kristen listens as Brady explains he needed time alone. John updates him on Xander being the shooter before disconnecting. Kristen’s thrilled Brady didn’t rat her out to John and pulls him into the shower with her. After, she leaves, and Brady heads out as well.

At the DiMera mansion, Eve reports she’s unable to reach Brady, who has a lot going on. Stefan’s sorry about Brady’s brother, but remains displeased at him being a no-show. Eve concedes Brady walked out on her – she doesn’t know where he is. Stefan muses, “Maybe he’s with Kristen.” He’s heard she’s obsessed with him. Eve argues that Brady hates Kristen. Talk returns to business. Eve can’t answer Stefan’s questions because Brady handles the financials. Stefan yells, then tells her he’ll stall the board while she finds him. Eve vows she’ll make things right. Later, Stefan has a difficult phone call with Mr. Shin. Sami enters as he disconnects and asks, “Someone having financial problems?”

Outside Nicole’s place in Nashville, Eric flashes to her saying she loves him and never stopped. He phones Roman, who’s pleased to hear that Eric found Nicole and she still loves him. Eric says Sami didn’t shoot Marlena. Roman thinks he heard the news reports and adds there’s an APB out on the real shooter, Xander. As they talk, Eric theorizes that Xander may have been shooting at someone else. Roman urges Eric to fight for his happiness and disconnects. Inside, Xander mocks Nicole over Eric showing up and finding her with him. Nicole calls him a bastard. Xander bids his wife to mind her tongue and warns the only way she’s getting out of this marriage is if she’s dragged off to prison for murder. He taunts she’d lose Holly, and she tells him enough of the threats. Xander relays he didn’t shoot Eric because of Holly being there; he imagines himself being a good father figure and husband. Xander touches Nicole while wondering when she’ll start being a good wife. She hisses, “When hell freezes over,” then caresses him before caustically saying she has a headache. He suggests she get in the mood soon or Roman Brady will be hearing her confession. After Xander leaves, Eric knocks on the door, but Nicole tells him Xander’s already won. Eric insists on making a plan, so she lets him in. Eric says they have to find the recording. Nicole frets that Xander’s dangerous. Eric fumes that Xander wanted to sleep with her. Nicole would kill him first – then muses that maybe that’s the way out…Xander has to die.

In a janitorial room, Xander opens a drawer and pulls out the recording. He smiles that as long as he has this gem, Nicole can never leave him.

At the Brady Pub, Roman’s stunned to see Hattie walk in.

Eric Learns Nicole Is Married to...