Eric Learns Nicole Is Married to Xander, Who Shot Marlena 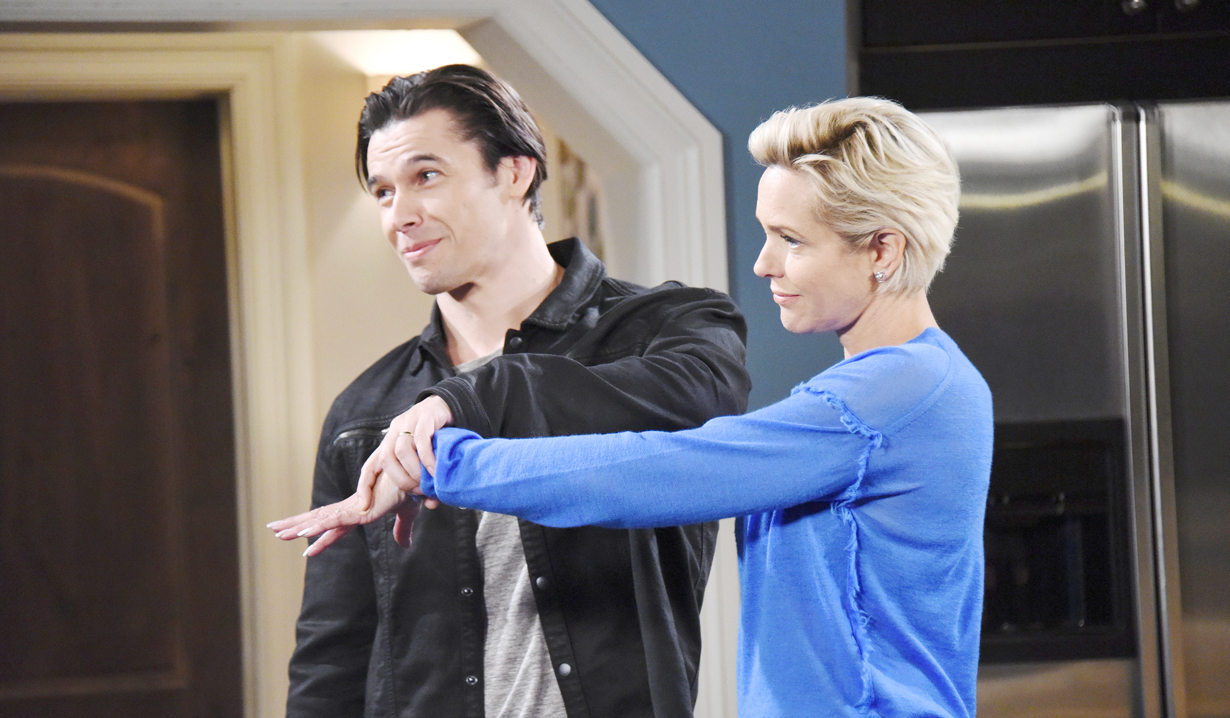 At the Salem PD, Shelia finds a job she thinks she’d be perfect for in the paper, until it turns out to be in Abe’s office. She calls him a huge jackass as Lani walks in and takes offense. Eli introduces them, and Sheila calls Lani the skank who broke Eli’s heart. They argue, and she can’t believe how Lani treated a good man like Eli. Lani tells her to mind her own business and rushes off. Sheila apologizes to Eli, who asks her to stay out of his life and focus on her own. She decides to see if there are any other jobs out there, and thanks Eli for helping her get her car back so she has a place to sleep. He refuses to let her live in her car and offers to have her stay with him.

Abe meets Valerie at the Brady Pub and vents to her about Sheila. Valerie never liked Sheila or her brother Russell, and fortunately Eli grew apart from them. Abe says Eli and Sheila have been tight lately, but Valerie is sure he can take care of himself. Abe reminds her that he’s in a vulnerable place, which Valerie is quick to point out is due to his daughter. He thinks if she is going to continue to attack his daughter then they are in big trouble. Valerie apologizes and suggests they make a pact not to let their kids’ differences cause problems for them.

More: Days’ blog on the failure of the DID story Brady and Kristen check in to a seedy motel. She can’t believe he is really with her, and wonders if he’s trying to pull one over on her. He swears he isn’t playing her but he does want her to promise not to go after his family again. He admits to having feelings for her still, and he’s tired of fighting them, which is why he is with her. They kiss and move to the bed where they have sex. After, Brady comments on the tattoo on her back, which she reveals she got in Italy to signify her rebirth. She cries that these past years have been very lonely for her. He thought she was with EJ, unless that was another lie. She’d rather discuss that another time and asks to just enjoy being together. They kiss, and later Kristen falls asleep. Brady promises to uncover all her secrets, including what she knows about EJ. In Marlena’s room at the hospital, John, Sami and Marlena watch the surveillance video and identify Xander as the second shooter. They don’t know why he’d have it in for Marlena. John wonders if he was Kristen’s backup plan and she hired him. Marlena and John hope both Kristen and Xander have high tailed it out of town. John makes a call to Hope to report what they’ve discovered, and Sami knows Kristen is her only hope to locate EJ. John doesn’t want her getting her hopes up, but Sami won’t ever stop hoping. Sami leaves, and John promises Marlena that he’ll not only get out of his sham marriage to Hattie, but he will find Xander. At her apartment in Nashville, Eric is shocked to find Nicole living with Xander. Eric tackles him and tells Nicole to run, but she can’t because Xander knows she killed Deimos. Xander reveals he discovered the recording that Brady blackmailed her with, and when he located Nicole he blackmailed her into marrying him. Xander admits they haven’t consummated the marriage yet, and he’d never force a woman to do that. Xander knew the only way to get Nicole to love him was to get rid of Eric, which he tried to do at the wedding. Unfortunately for him, Eric moved and his shot hit Marlena. Xander pulls out a gun, aims it at Eric and decides to finish the job. Nicole orders him to put the gun down and warns she will never forgive him if he kills Eric. She offers to renegotiate the terms of their marriage, as long as he releases Eric. Xander orders Eric to leave, but he refuses. Nicole promises Eric that she’ll be fine, but he has to go. Eric departs, and Nicole warns Xander she will kill him if he hurts Eric. In the hall, Eric vows to rescue Nicole and Holly.

Sami goes to the park and calls Sydney to say goodnight, and promises she will be home just as soon as she does one more thing. Sami looks at the stars and promises to find EJ.

Brady tries to get Kristen to trust him.

John Gets Shocking Footage of...