Monday October 8, 2018: Nicole and Eric express their love, Lucas vows to protect his daughter, and Bonnie threatens Mimi with prison. 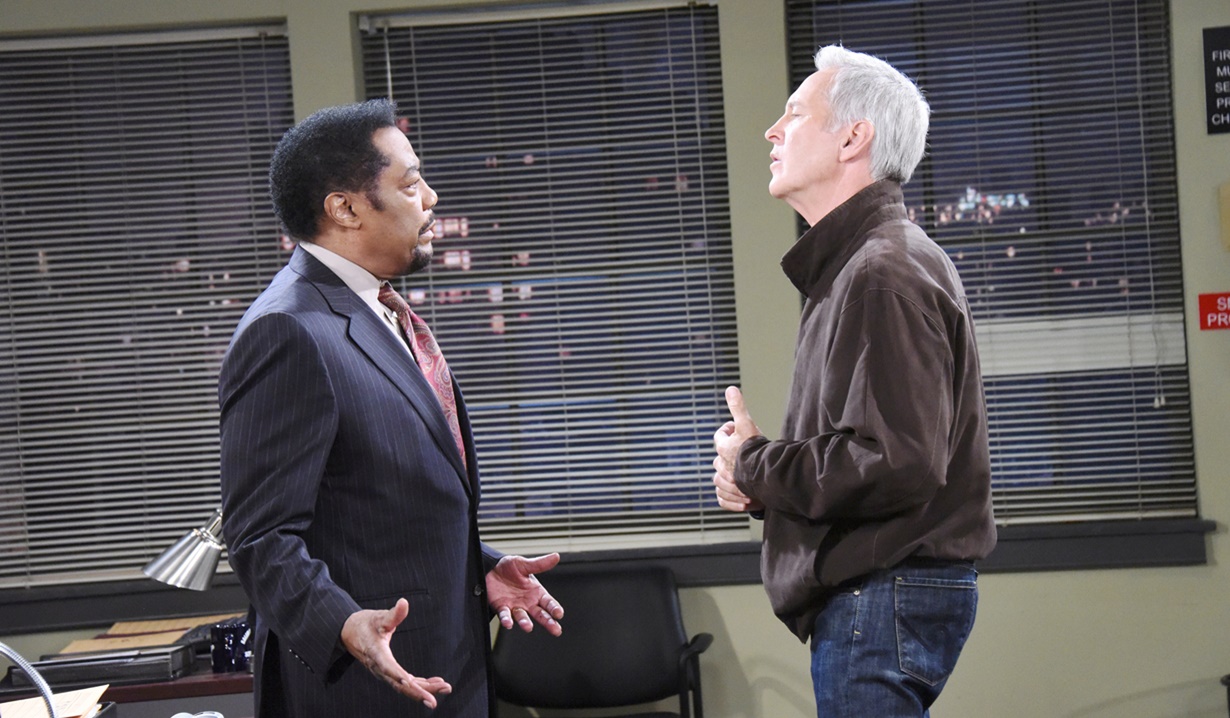 At the SPD, Sheila asks Eli how he’s doing. He’s hanging in there. Abe storms past hollering that he wants to know who’s responsible. Eli follows as Abe complains someone parked in his spot. It was Sheila. Abe and Sheila bicker until he announces he had her car towed. Eli takes an irked Sheila to the impound.

In her hospital room, Marlena tries to think back to the night she and John were to get married. John appears and is pleased to see her smile. He reports the bullet didn’t match the gun Sami was holding – she didn’t shoot her. Sami enters and embraces a joyful Marlena. They dish about Hattie and the charges being dropped. They puzzle over the identity of the true shooter. Marlena’s been trying to get a clearer picture in her mind. John wants to review the footage from the square and decides to head downtown. Sami tells Marlena she and John are soulmates. Sami tears up – she wants that too; she wants EJ to come back to her. Marlena warns that Kristen could have lied to control Sami. Sami knows he’s out there. Marlena recalls regrets she had when her life flashed before her eyes, and urges Sami not to spend any more time away from her children.

John arrives at the SPD looking for Abe’s help finding the shooter. He reveals Marlena saw someone holding a gun in the bushes. John wants access to the footage from the square. Meanwhile, Sheila returns and informs Abe he owes Eli $250. Abe suggests she get a job. Sheila assures Eli she’ll pay him back. She finds a suitable job ad, but realizes Abe’s the employer.

At the hotel, Mimi’s furious Bonnie let Lucas take her baby. She notices the infant lost her baby bunny as Bonnie explains what’s required to pull off this plan. Mimi declares she’s going to expose Bonnie to Lucas, but Bonnie hollers, “Oh no you’re not.” Mimi wants her baby back. Bonnie complains Adrienne wouldn’t drop the charges, so she had to get more creative – she pleads for a little more time. Mimi starts out the door, but Bonnie reminds her she did ten years in the slammer for her killing her father. Mimi wanted to help her, but the plan is out of control. She warns Lucas may be a sap, but Chloe’s as smart as they come. Mimi’s also concerned Lucas will want custody, and rants about Bonnie’s sick need for revenge on Maggie. Bonnie warns if Mimi goes to Lucas, she’ll tell the authorities who really killed her father. Mimi calls her sick as Bonnie promises it’s temporary. Bonnie then muses that the plan wouldn’t have worked if Lucas wasn’t related to the baby daddy.

At Doug’s Place, Lucas and Chloe admire the baby. Lucas grins; he can’t believe he has another daughter. Chloe notes there’ll be teething and no sleep, but Lucas enthuses it’s a second chance for him to get things right. They discuss Bonnie being a sociopath. Chloe worries she’ll bleed him dry, but Lucas vows to protect himself and his daughter. Chloe’s still convinced Bonnie will use him as an ATM, and will use the child for her own agenda. Lucas feels it’s a slam dunk for him to get custody, but Chloe reminds him he’s a recovering alcoholic who also did prison time. She worries he’ll get hurt, but Lucas feels he’s the girl’s best hope at a decent future.

At Nicole’s house, she asks Eric how he found her. He says Maggie gave him the address. Nicole frets; she had no right to do that, and he shouldn’t be there. Nicole tries to get him to leave, but he accuses her of lying about not loving him. He adds, “I know everything, Nicole.” She maintains he’s wasted his time, but will give him five minutes. Eric asks about Holly before revealing he knows she killed Deimos and that Brady used it to force her away from him. Nicole insists there’s nothing left between them, but Eric reminds her what she said at the farmhouse – they could have that love right now. Nicole grips a baby blanket as Eric calls her his true love and tells her they’re free to be together. Eric expresses his love, and Nicole tearfully admits she still loves him and never stopped. She regrets the hateful, horrible things she said to Eric, who blames Brady. Nicole agonizes, but he insists he never hated her; he was angry and never stopped loving her. They kiss passionately. Eric wants to pick up where they left off, but Nicole says he has to leave…now. Eric understands she’s concerned about being prosecuted but they can live wherever she wants; he won’t let her go. Nicole hisses, “Stop it! There’s no way he’ll let that happen.” Eric assures her Brady won’t say a word, but he’s not the problem. Xander appears and asserts, “I am.”

In Marlena’s hospital room, she, Sami, and John watch the square footage. Marlena gasps, “Oh my God, is that who I think it is?” John muses, “I think we found our shooter.”

John and Marlena learn the truth about the night of their wedding.

Eric Learns Nicole Is Married to...