Friday October 5, 2018: Kate and Roman make a deal, Mimi's angry with her mom, and Abigail tries to tell her family she's unconvinced that Gabby has returned. 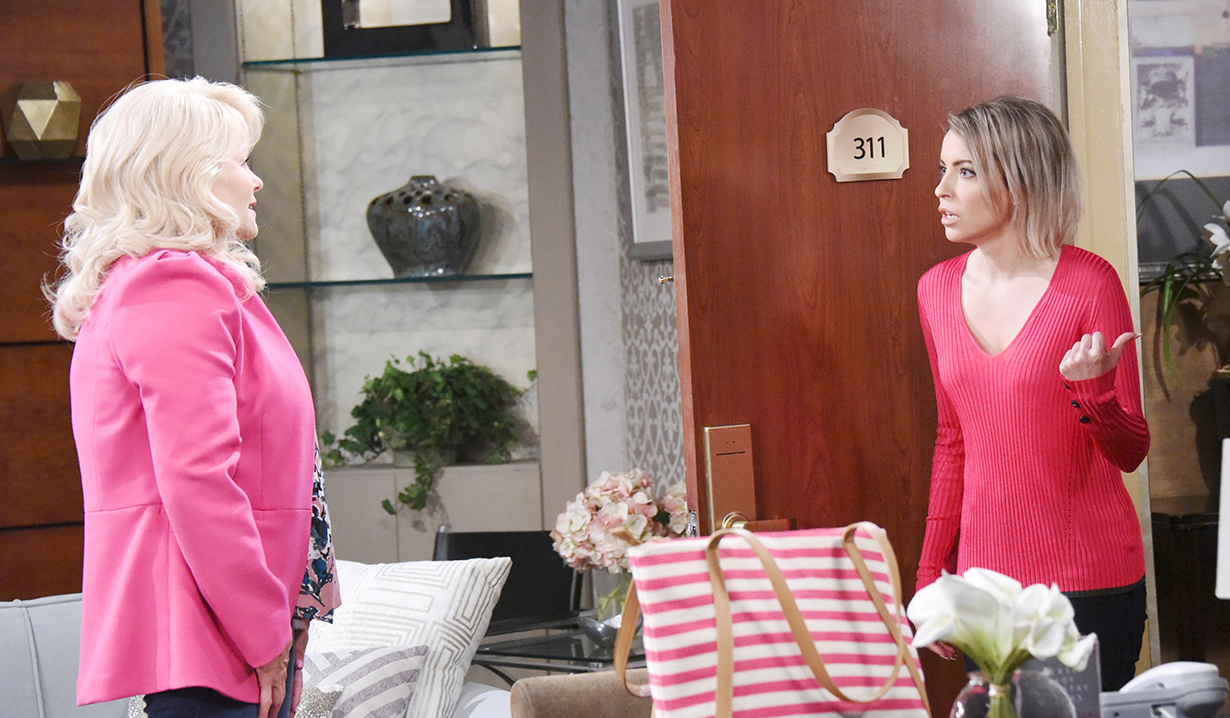 since she got married. Roman has a proposition for her. He knows about the photos that Stefan used to blackmail her with and how she used Leo Stark to deceive Sonny. Kate flashes back to Kayla snooping in her room and realizes Kayla told Roman the truth. Roman wants to help get Kate out of this mess by working with her to take down Stefan O. Roman knows she has something to do with Leo and Ted’s disappearance. Kate flashes back to admitting Ted was relocated permanently but not dead. Kate shrugs, lying that she knows nothing about that. Roman eventually convinces her to work together.

At the hospital, Stefan notices how nervous Abigail is and tries to hold her hand. She swats him away. Kayla pops up and Abby asks to see Marlena because she thinks she’s sick again. She fills the doctor in on the missing time and how she texted Stefan and doesn’t recall. Kayla says this could be a pregnancy symptom. She had memory issues when she was pregnant. Abigail decides to go home and snaps at Stefan who offers to drive her. Once she’s gone, Kayla reams Stefan out for hanging around Abigail when she doesn’t want him to. She flashes to telling Roman that she gave Stefan Abigail’s confidential medical records because otherwise he’d make Steve blind again. She tells Stefan that nothing is worth being indebted to hhim and to go ahead and do what he will with Steve’s eye. They’ve been through worse. She snipes that she’s not telling him anything more about Abigail. Stefan respects that.

At Alice’s, Chad ponders realizing that Gabby must be back since he found the wig Gabi planted under Abigail’s bed. Downstairs, Jennifer receives a save the date card for her own wedding in the mail and flashes to handing Eric back his engagement ring. Chad finds Jenn and shows Jennifer the wig. Jenn looks panic stricken. Chad fills her in on Gabi and Stefan’s thoughts that Abigail’s DID has returned. He shares details. They argue about whether or not it’s true and Abby walks in. Chad stammers that he’s there because he was worried about her. Jenn holds up the wig and Abigail’s jaw drops onto the shag carpeting. They tell her about Gabi and Stefan’s concerns and Abby sneers. Chad knows she’s stressed and blames himself. He should have been there for her. He reveals he knows about the text to Stefan. Abigail hates him. Chad says obviously her alters feel differently. He sputters about, asking Abs to let him help her. Jenn too wants to help but Abigail’s angry. She doesn’t believe Gabby has returned and tells Chad not to rummage through her things. Maggie tells Eric she knows where Nicole is. Chloe gives them space and Maggie explains that she now knows why Nicole really left Salem. She says Nic’s staying at her daughter Sarah’s place in Nashville, who is practicing medicine in Chicago. Eric thanks Maggie and takes off.

At SPD, Lucas yells at Bonnie for lying to him about their daughter’s whereabouts. Lucas threatens to send her back to Statesville. They yell at each other and Bonnie goes to make a call privately, yelling at someone to produce ‘that baby pronto’ while elsewhere Lucas calls to rant to Chloe about not letting “that idiot” get away with keeping his kid from him. Later, Bonnie says she can take him to see the baby now.

Back at Doug’s Place, Maggie’s angry when Chloe tells her about Bonnie backing out of the deal. Chloe worries Lucas will turn to alcohol but Maggie urges her to have faith in him, then wonders if she’s ready to raise his little girl with him. Chloe says no, but she’s worried about Parker adjusting. Maggie looks at her, dubious. Chloe admits the name Lockhart brings back negative feelings because of Mimi. Maggie finds it random of her to bring up Mimi but Chloe worries the kid will turn out to be like her sister. Maggie sneers at that. Mimi had an unhappy childhood and that won’t be the case with little Bonnie and with her raising the kid. Chloe beams and realizes she’s right.

Lucas and Bonnie arrive at a Salem Inn room where Baby Bonnie is sitting in her carrier alone. Lucas fawns over the adorable kid as Bonnie looks at the door, worried, then fights with Lucas about wanting to put the kid to bed. Lucas says she can sleep in her carrier and he’ll watch. He doesn’t trust Bonnie not to ditch him. She refuses so he says he’s taking her to meet Chloe. When she balks at that, he invites her along. Once he’s gone, Bonnie says, “You can come out now,” to her daughter Mimi (played by Farah Fath), who can’t believe her mother just let Lucas take her baby.

Eric arrives at Nicole’s place. She’s shocked to see him. John Gets Shocking Footage of...