Thursday October 4, 2018: Gabi continues her plan to screw over Abby and Chad, Abigail opens up to Stefan about her concerns, and Victor and Maggie share secrets. 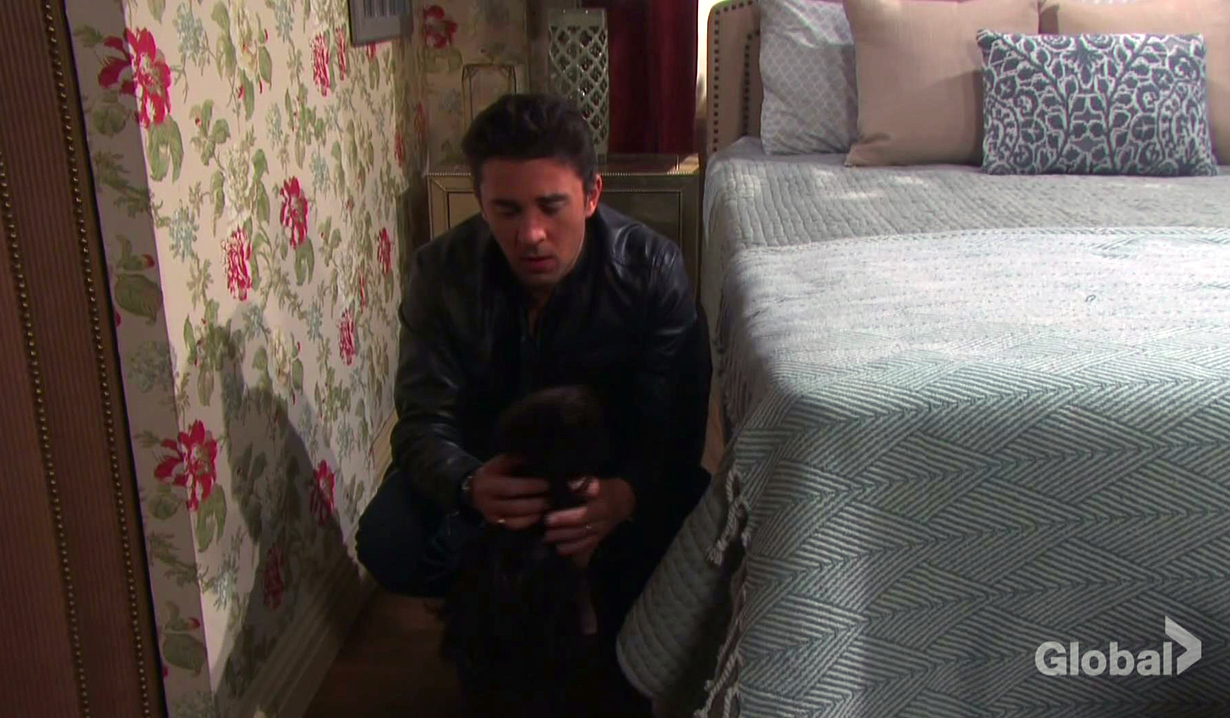 At Doug’s Place, Chloe calls Lucas to leave a message asking if he made the deal with Bonnie to see the baby. She disconnects as Eric races in to ask if she knows where Nicole is. He explains that Brady had some dirt on Nicole which was the cause of her leaving Salem. He tells her a little about Brady forcing Nic to leave town. Chloe’s sorry.

At Mandalay, Maggie flashes to lying to Eric about not knowing Nicole’s whereabouts and then calling Nicole to let her know Eric is looking for her. Meanwhile, Victor bitches about being forced out of their home for peace and quiet from Susan Banks who is sponging off them. He also hates that Gabi is sponging off them. “Our home has turned into a cracker factory,” he says, noticing Maggie’s distant.  She reveals it’s about Eric’s visit and shares details. Vic’s surprised his wife’s in contact with Nicole. Maggie says she receives updates about Hollie with the condition that Maggie keeps her location secret. Maggie hates lying to Eric. Vic respects Maggie for keeping Nicole’s confidence. He confides that he knows “the whole ugly story” about what Brady did to Nicole. He spills it and Maggie’s stunned Brady would be so callous and that Victor kept Deimos’ real killer from her. They wonder if Eric knows that Victor knows. If it gets out, Vic could be in trouble. Victor wonders where Jennifer fits in. Maggie admits she called Nicole, asked her to keep her secret. “She sounded so scared,” Maggie muses and considers telling Eric the truth.

At the Kiriakis mansion, Chad stammers up a storm when Gabi ponders if Abigail’s seeing a psychiatrist. Gabi lies that she and Stefan have seen signs of illness. She feigns that she doesn’t want to admit it but that Abigail texted Stefan that she needed him but when he arrived to her house, she was confused, thinking she meant to send that text to JJ. Chad shrugs. Gabi tells him Stefan thinks the text came from “Gabby with a y.” Chad’s glad to know this. Maybe Gabby’s fighting to be the one to give birth since it was her who had sex with Stefan. Chad decides to go see Abby.

Stefan arrives at Alice’s to speak to “Gabby,” and Abigail tries to kick him out, he forces his way in and tells her his theory that Gabby sent that text. Abigail denies it. Stefan suggests she talk to Chad about it if not to him. Abby thinks he has enough on his plate. She finally agrees to talk to him. She can’t recall sending the text and admits to losing time. She tells him about missing her dates with Chad. Stefan offers to support her through this but she vehemently declines but they wind up heading to talk to Marlena.

Sami squirms out of Eli’s reach when he attempts to arrest her for bail violation at the hospital. He says Stefan filed a formal complaint that she broke into his house looking for Kristen. Sami cites harassment but Eli cuffs her. She tells him how to get into the secret tunnel, thinking he’ll find Kristen there.

In her hospital room, Marlena recalls the wedding. Before she heard the gunshot, she saw another gun by the bushes across the square. The shot fired came from there. “Sami’s innocent,” she cries. John grabs the gun Kristen had earlier and leaves for SPD to have it tested and hopefully clear Sami’s name. Abby and Stefan arrive to see Marlena, hopeful that she can tell her if Gabby’s vying for control.

John finds Sami in the interrogation room at SPD. She yells about finding Hattie in her mom’s room so John explains the whole story about the switch so he could keep Marlena alive. Sami’s touched, especially when she learns her mom’s out of the coma. She jumps into John’s arms as they cry. He fills her in on Kristen taunting Marlena with the gun and that Eli’s testing it. Eli arrives and tells them there’s no way that gun shot Marlena. Sami feels vindicated.

Chad arrives at Alice’s but nobody’s home so he heads to Abigail’s room and searches it, finding the dark-haired wig Gabi planted.

Victor returns home and rants at Gabi for hanging out in his house. She tells him to talk to Sonny so he goes and she snipes that he can’t bring her down when things are going her way.

Maggie finds Eric at Doug’s Place and admits she was lying – she knows where Nicole is.

Roman and Kate work together.

Sami's Arrested for Breach of Bail...