Wednesday October 3, 2018: Hattie and Sami tussle, Stefan rats Sami out to the cops, and Kristen tries to get Brady to take her back. 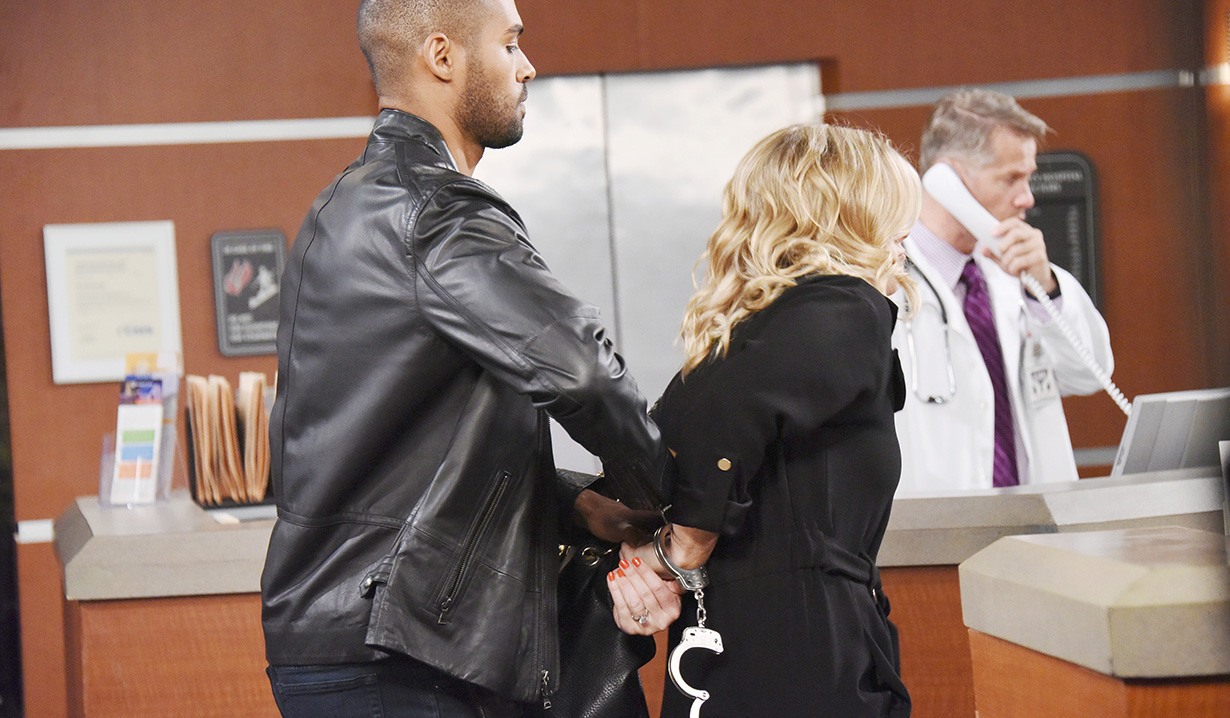 At Alice’s, Abigail tells JJ that she thinks her alters are back. She’s missing time, she slept through a date with Chad and it ‘appears’ as if she sent Stefan a message to come over. She didn’t do it. They question if she’s integrated.

At the DiMera mansion, Gabi finds Stefan talking to himself about “Gabby” coming back to him. Stefan covers. They discuss a possible expansion of their line to maternity clothes. She brings up Abigail’s taste in clothing and Stefan says he saw her last night. Gabi accuses him of harassing her but he confides that Abs invited him. Gabi acts surprised when he shows her the text and then assumes that he thinks “Gabby” is returning to him. Stefan asks if she believes him. Gabi believes Abigail’s in trouble. Stefan asks why she is so interested in this.

At the Kiriakis mansion, Eli asks Chad if he’s seen Kristen. He hasn’t and suggests he talk to Stefan. His first instinct is to call the cops until she claims if he does, someone he loves will be in trouble. Brady asks whys she’s still in Salem. She couldn’t leave without seeing him. She professes her love and thinks he can do better than Eve. She confesses she knows what he did to Nicole. Kristen feels it proves that they’re soulmates. Brady informs her not to bother blackmailing him into being with her. It’s not going to happen. Kristen isn’t judging him. In fact, she thinks she’s the only one who understands him. Brady says Eric knows about Nicole and he’s turned his back on him. Kristen assumes the rest of the family will do the same. Brady knows he’s made a mess of his life and isn’t sure what he has left. Kristen rubs his arm and whispers that he has her. She wants to run away with him. Brady agrees to it.

In Marlena’s room at the hospital, John explains that the family thinks she’s made a miraculous recovery because, “The role of Dr. Marlena Evans is now being played by Hattie Adams.” Marlena is shocked and John goes on to tell her that he can’t stop it because Hattie’s blackmailing him – he married her to save Marlena’s life. He explains the story and admits it’s legal. All that matters is that they’re together. Marlena’s grateful to him for saving her life.

More: Days poll – who should Ciara be with Tripp or Ben?

Sami catches “Marlena” dancing around in the hospital to some country music and asks what she’s doing. Hattie turns the tunes off and says she got carried away after marrying John again. Sami’s never seen her mom do moves like that. Hattie just wanted to get her “groove thing going.” She’s distracted by the bag of burgers Sami brought and goes to snatch it as Sami tries to understand how it’s possible Marlena is dancing around after being in a coma yesterday. Hattie replies, “I’m like a cockroach. I’m unkillable.” Sami’s baffled that she’s referring to herself as a cockroach. Hattie grabs a burger with grilled onions from the bag. Sami says that one’s hers – she points out, “You hate grilled onions.” Hattie claims her tastes have changed but Sami yells, “You’re not my mother!” She wants to see the scar from the bullet wound. Hattie shoves the burger into her mouth and turns away. Kayla arrives and Hattie yells that Sami thinks she’s ‘somebody else’. Kayla denies it and Sami snipes that she’s not leaving until she sees what’s underneath that gown. Hattie yells, “Get outta here you little pervert!” She calls Sami a “certified whack job and a really bad daughter.” Sami realizes she’s Hattie Adams. Sami grabs Hattie and demands to know where her mother is, as Kayla tries to come between them and reveals that Marlena’s alive and well.

At Alice’s, JJ suggests Abby talk to Chad about the text but she doesn’t think he could handle that. Chad strolls in and questions them. Abby lies that she put mustard on his sandwich. Chad laughs. He can handle that. He goes to get Thomas and Abby begs off their date, citing she has a doctor’s appointment. Chad takes off with the kid and JJ’s supportive of his sister, knowing she’ll be able to get through this just like she did last time.

Eli returns to the DiMera mansion to ask Stefan if he’s seen Kristen. Stefan lies that he hasn’t and squeals on Sami for breaking her bail bond since she broke into the manse.

Gabi finds Chad at the Kiriakis mansion and asks why he’s not on his picnic. Chad lets her know Abigail had a doctor’s appointment. Gabi thought she already had one – unless it’s for a psychologist? She shares that Stefan thinks “Gabby” is back.

Eli arrives at the hospital and arrests Sami for violating her bond. In Marlena’s room, she remembers seeing something off to the side when Sami supposedly shot her.

Chad reels after finding something disturbing.