Tuesday October 2, 2018: Eve gets strange advice from "Marlena," Will reveals to Sami that he's still in love with Sonny, and Ben's new evidence shocks Tripp and Ciara. 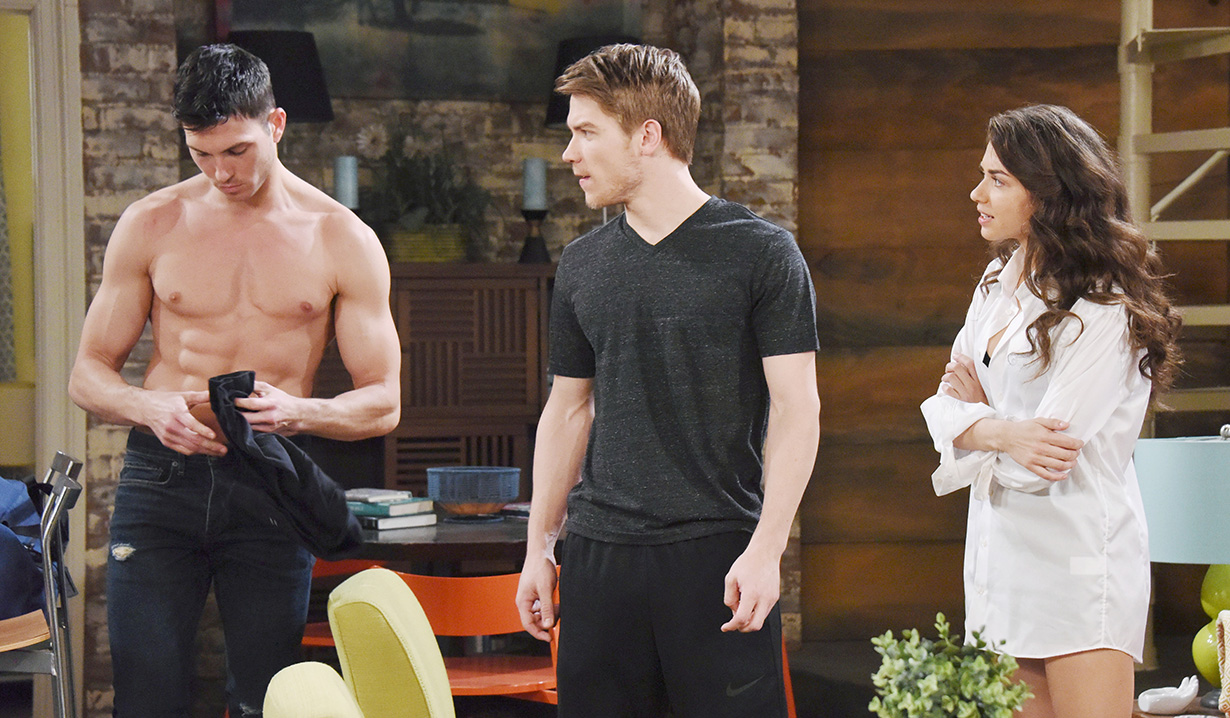 Ben meanders into the loft and declares himself free because SPD realized the evidence in the arson case was planted. Ciara calls her mom and receives confirmation that the fingerprint was transferred from another surface. Ben snorts when Ciara says her mom swears she didn’t do it. Ben goes to shower off the jail smell while Tripp seethes. Ben returns and Ciara asks Tripp for a moment alone with Ben. “No,” Tripp snaps. Ciara insists she’ll be safe. Once Tripp’s out of the room, Ciara commands Ben to leave. “I have a boyfriend and it’s not fair of me to have you living here too. It confuses things,” she tells him. Ben inquires as to how that is. She reveals it’s not fair to Tripp. Ben realizes he’s a threat to their relationship. Ciara wants him to move out so Ben goes.

Eve visits Paul in the hospital and fishes for Brady’s whereabouts. Paul heard he was there earlier when he was asleep and asks if they’ve set a wedding date. Eve looks uncomfortable. By the hub, Sami catches Brady up about their parents’ wedding. Brady’s surprised. He leaves and Will appears. He enlightens his mom about Paul’s paralysis. Sami’s saddened but grateful Paul has Will. Will opens up about being in love with Sonny still. Inside Hattie’s room, John fumes when he learns Kristen DiMera was there. He calls Roman and when he doesn’t pick up, John rushes to Marlena’s room. In Marlena’s room, the gun has gone off during a struggle between Kristen and Roman. There’s debris everywhere and Kayla grabs the gun when it goes flying and points it at Kristen. Kristen taunts Kayla as she backs out of the room, knowing Kayla won’t shoot. She blows a kiss to Marlena and goes.

More: Could Marlena have a second shooter?

In Paul’s hospital room, Brady visits and they discuss Paul needing a new place to live. Paul mentions Eve’s visit and Brady explodes that Eve betrayed him and cost him his son. Talk turns to Will. Paul wonders if Brady thinks that Will’s staying with him out of obligation or pity. Meanwhile, Eve visits “Marlena” but Hattie takes a few minutes to discern who she is. Once she clues in, Eve asks if she’s seen Brady. Since Hattie hasn’t, she asks why she’s looking for him. Eve explains her betrayal and Brady’s reaction and Hattie says, “I don’t know where this guy gets off judging you.” Eve looks puzzled. Hattie assumes she was trying to help Brady. She thinks Brady should get over it. Eve’s in shock, yet thrilled with the advice. Down in Marlena’s room, John races in and moves to check out Roman when he sees Doc is awake. He runs to her side in tears, and cries, “You’re awake!” They have a tearful reunion while Roman gets up and goes after Kristen. Kayla removes the ventilator. Roman returns. He didn’t find Kristen. While Kayla stitches Roman’s head wound, John explains to Marlena about Belle finding the advance directive and how he switched her with Hattie so he wouldn’t lose her. Back by the hub, Sami tells Will that she’s not giving up on finding EJ and hopes he doesn’t give up on a future with Sonny. Will argues that he can’t leave Paul after he risked his own life to save him. Sami says Paul deserves happiness but… Will stops her, thinking this is the right thing to do. Sami’s proud of him but he’s making a big mistake. Will declares that he does love Paul and Paul needs him. Sami thinks he should spend his second chance at life not being a martyr but being happy. They head to Paul’s room before Brady can respond to Paul’s question about Will’s feelings. Sami thanks Paul for saving her and she and Brady leave. Once gone, Paul notes Will’s tense. Will says he found a wheelchair accessible apartment for them both to move into. Paul cries happy tears. Brady crosses Eve’s path. Eve divulges “Marlena’s” advice about him being hypocritical and sexist. While they chat, Kristen appears and eavesdrops as Brady lets Eve know he’s moving out right now. Sami strolls into “Marlena’s” room to look for forgiveness. Hattie agrees to it. They hug and Hattie asks for a burger. Sami’s baffled but toddles off to get it. Once she’s gone, Hattie’s bored so puts on some country music and dances around with glee until Sami returns with the burger and catches her.

Brady packs up his things at Salem Inn. On his way out, Kristen turns up.

Sami comes to a huge realization.

A Gunshot Rings Out As Roman and...

Sami's Arrested for Breach of Bail...