Monday October 1, 2018: Marlena wakes up from the coma, John and Hattie are married, and Sami prods Stefan for word about EJ. 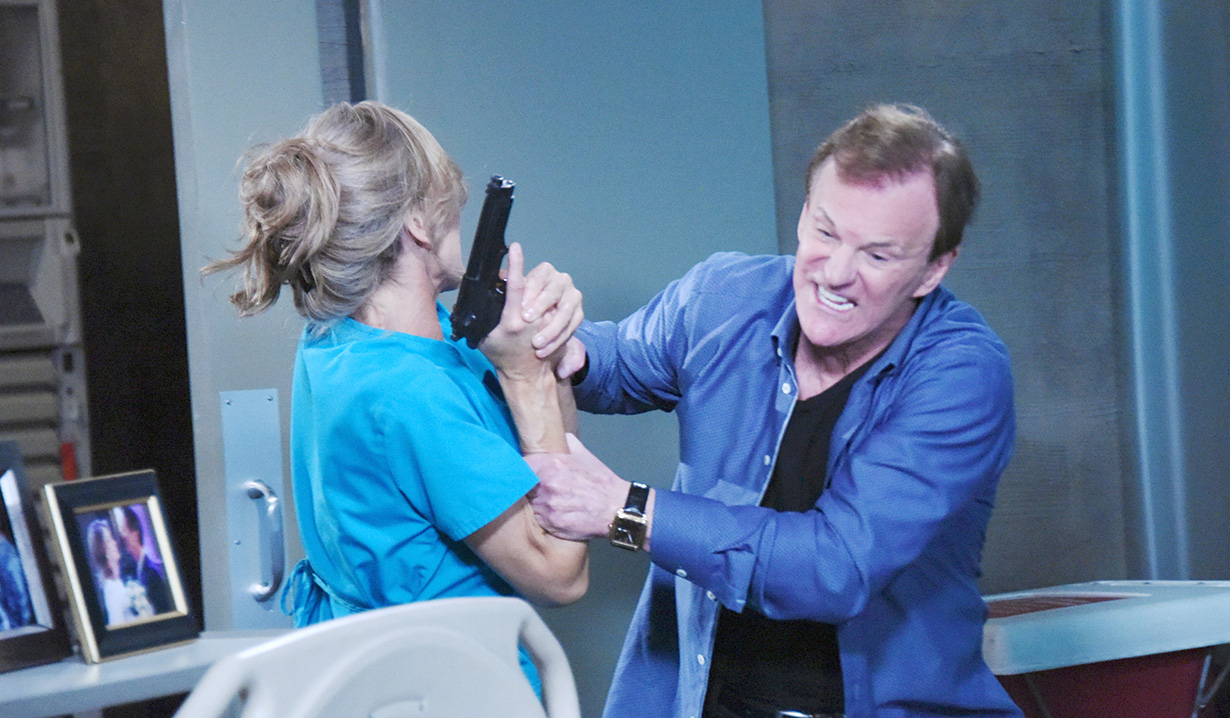 At the loft, Ciara is amazed to realize she trusts Tripp. She wants him to make love to her. They kiss and Tripp wants their first time to be special but Ciara’s ready now. They’ve the place to themselves. Tripp wants reassurance that she’s ready for this and isn’t doing this because she feels she owes it to him. Ciara realizes he may not trust this because she made him feel insecure about her and their relationship. Tripp decides they’ve talked enough and they go into her bedroom for sex. Afterward, Ciara tells Tripp it was perfect and they agree it’s the first time in a long time that they don’t feel so alone. They profess their love for one another. to Hope that Shawn discovered that Ben’s fingerprint was transferred from another surface to the can of accelerant. Hope thinks there’s been some mistake. It makes no sense to her though it makes perfect sense to Rafe. Hope admits that deep down she knew it was too good to be true. Rafe says they’ve got to let Ben go but Hope refuses. Rafe convinces Hope to change her mind and seconds later, Ben’s released.

At the DiMera mansion, Sami badgers Stefan to tell her whatever Kristen revealed about EJ. Stefan flashes to Kristen telling him the story but lies that Kristen said nothing. Sami threatens to tell the police that he was aiding and abetting his sister if he doesn’t spill but Stefan had the place cleaned. Sami grins and calls him a chip off the old block. Stefan finds that thought exhilarating. Sami tells him how EJ grew up not knowing Stefano, either. She appeals to him as an expectant father, asking him to help her reunite her family for her children’s sake. Stefan shrugs. Maybe EJ doesn’t want to be found. Sami counters that he’s probably being held against his will. She offers Stefan half of her millions if he tells her everything he knows. Stefan acts as if he doesn’t need the money but Sami has done her homework and knows the company isn’t doing well. He could be a hero to the board. Stefan teases that he and Kristen may have had a conversation about EJ but he refuses to tell her more or make a deal. She warns she’ll never let this go.

At the hospital, John and “Marlena” are married and John hems and haws when Abe tells him he can kiss his bride. Belle takes a photo as Hattie grabs John and lays a passionate kiss on him. John tries to get rid of them afterward but Belle brought champagne. John looks ill at ease. Belle toasts to a lifetime of happiness. Hattie whips out the marriage license for Abe to sign, covering her own signature. John flashes to signing it himself. John tries to walk Abe out but Hattie won’t have it. She takes his arm in a vice grip and declares she wants to discuss their honeymoon. Abe goes and Belle says she’s sorry they argued while Mom was sick. John tears up and they embrace. John knew she had her mom’s best interest at heart.  Marlena thanks Belle for the wedding, telling  her it makes up for the whole “pulling the plug debacle.” John cringes behind Belle and once Belle’s gone, Hattie asks to consummate the marriage. John says it’ll never happen. Hattie was joking. “All of this,” she says, pointing to her body, “belongs to Roman.” Hattie casually admits a gun-toting Kristen visited her. Meanwhile, in the wing that’s being renovated, Kristen finds Marlena has woken up and taunts her with a gun while Marlena struggles with the Endotracheal tube. Kristen grins. She can identify how painful it can be, having gone through the same feeling while in the hospital after Marlena “pushed her” out of the window. Kristen counts the many ways she hates Marlena such as correcting people’s grammar, and how John calls her Doc. She blames Marlena for taking John from her and then Brady and vows she’s finally going to pay. She admits she’s going to miss Marlena, but she’ll get over it. She aims the gun as Kayla walks in and yells to stop. Kayla runs to Marlena’s side, thankful her friend is awake. She covers Marlena’s body with her own but that doesn’t deter Kristen who will simply shoot them both. Kayla knows she used to be a good person. Kristen credits Marlena for her changing. Kayla assumes the other doctors are on their way down but Kristen knows that’s a lie. Nobody’s there to rescue either of them. Roman walks up behind Kristen and grabs the gun from her hand. There’s a struggle and the gun goes off. Kristen screams. As Ciara and Tripp get out of bed to eat quiche, Ben lets himself in and takes in the state of their clothes.

John’s beside himself with happiness…