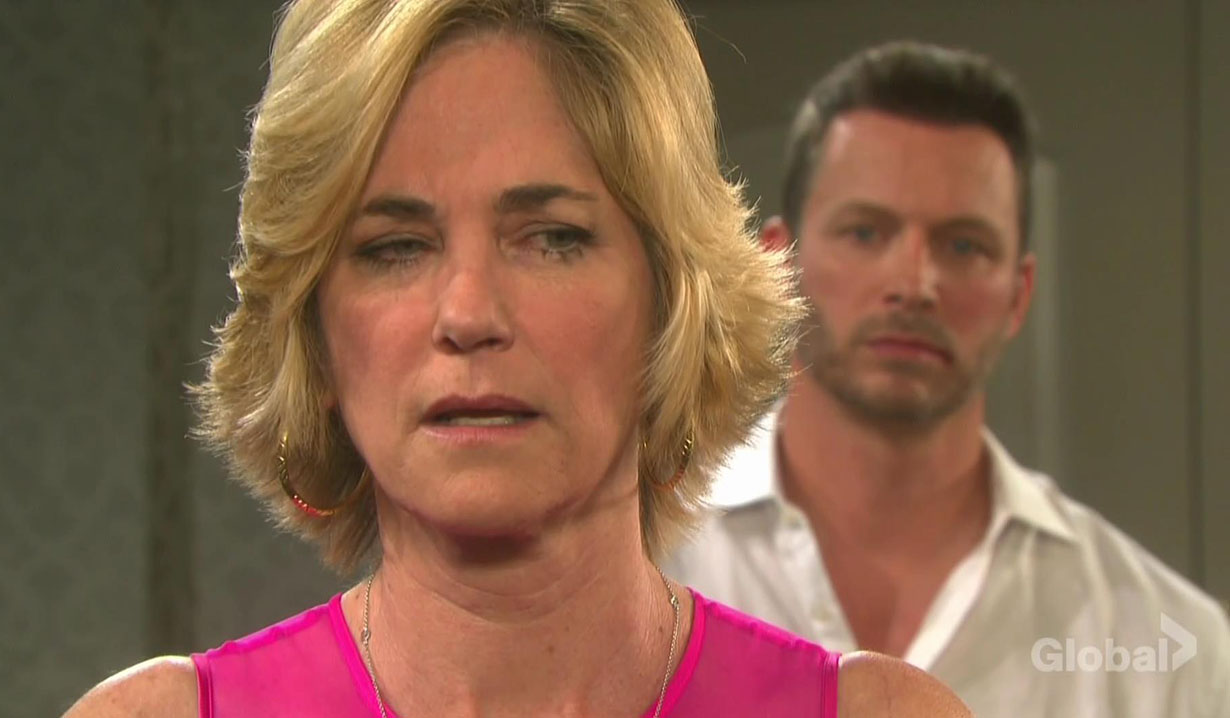 Eve tries to stop Brady from getting the door at Salem Inn when Jenn pops by to discuss Eric. Eve gives her the stink eye. Brady tells her Eric left. He assumes she knows…Jennifer’s disgusted with how he blackmailed Nicole. In fact, it was she who told Eric. Brady’s surprised and asks how she found out. Jenn doesn’t say but explains it was the right thing to do telling Eric the truth. Brady’s in awe of her selflessness. He admires that but knows there were only three people who knew the story. He turns on Eve who looks guilty, but thinks Victor told Jenn. He grabs his keys, ready to confront his grandfather when Eve comes clean. Brady has trouble believing her but Jenn confesses it was Eve. The ladies argue since Jenn agreed not to tell all and Brady thinks there’s more to this. Jenn didn’t mean to hurt either of them. She goes and Eve reveals that it was her idea to do something drastic to sway the custody case, though Victor planted those drugs.

Eli meanders into the Kiriakis mansion while Victor and Maggie are having tea. Eli is there on police business. Maggie turns on her husband and asks him to come clean. Eli says they may be harboring a fugitive. They gape until Susan walks in looking for tea sandwiches and Eli motions to her as being the fugitive. He wants Susan to verify who she is so Susan takes one of Maggie’s tea cups to “tinkle” in. She dashes off with Maggie trying to snag her mother’s bone china. Eli dons gloves and tries to pry Susan’s teeth off. They’re real. She asks if he wants to see if her hair is a wig, because it’s not. Victor mutters, “Good grief, it’s not?” Maggie shoots him a look. Eli goes and Susan speaks fondly of Marlena’s friendship and talks about making a doll for Marlena which has no context, and then asks if Victor wants to see it. He doesn’t. It’s bad enough he has to see her. Susan tells Maggie she’s such a doll that it’s a shame she had to marry a man who is mean, mean, mean. Victor agrees.

More: Beloved Days of our Lives alum passes on

At SPD, Sami overhears Justin telling Adrienne that Bonnie’s being released and she grunts that she’d better be next. Justin says she’s going nowhere so Sami gets her hackles up and storms off, getting her handcuffs stuck on the door handle in the process. The guard forces her back into the room. Justin reminds Sami that she can’t believe anything that Kristen says. Sami knows but she feels that EJ’s alive. Justin reminds her EJ was shot in the back, but Sami retorts that Will came back to life. Justin thinks he was probably not dead to begin with. He goes off to try to convince the judge to grant her bail. Eli arrives and Sami questions him about his leads on Kristen. He admits it was Susan at the Kiriakis mansion so Sami assumes Kristen’s stashed in the DiMera tunnels. Eli thanks her and goes. Justin returns. He got bail for her but she needs to promise not to go after Kristen. She promises – she just wants to be with her mom. She runs out and Justin sighs. “What have I done?”

Stefan brings Kristen lunch in the DiMera secret room and wonders how she’s feeling. She’s much better and shows off her phoenix tattoo on her back, telling him a story about how she got it after her fall in Europe. He rolls his eyes with disinterest and hopes she’s leaving after she eats. Kristen won’t leave without Brady. Stefan laughs. Brady’s taken. Kristen thinks that whatever they have pales in comparison. Stefan shakes his head, knowing she’s delusional. Kristen thinks he’ll change his mind once they bond. She feels they already have though Stefan denies that. She reminds him that he shouldn’t be quick to pass judgement when he has rather eccentric tendencies about love – loving a woman who doesn’t exist. They argue and talk over one another with passion until Stefan asks what really happened to EJ. She prepares to tell him the whole story. Later, he returns to the lounge and sees Sami there.

At the pub, Roman questions Eric about what happened between him and Brady. Eric explains the sordid story of how Brady blackmailed Nicole into dumping him and leaving town. Roman considers that whatever Nicole did must have been terrible. Eric says it was but it was justifiable. Roman is skeptical, knowing who Nicole is. Is it over between him and Jenn? Eric loves Jennifer but doesn’t know how to feel. Eric goes to Maggie at the mansion to ask for help in finding Nicole. 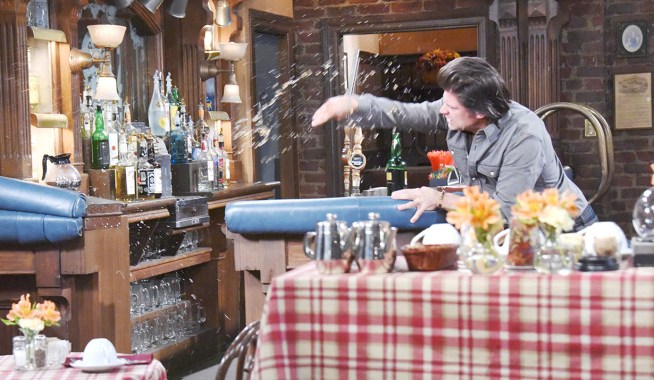 Eric Beats Brady up After Confronting Him About Blackmailing Nicole

Sami's Locked in the Secret Room at the DiMera Mansion 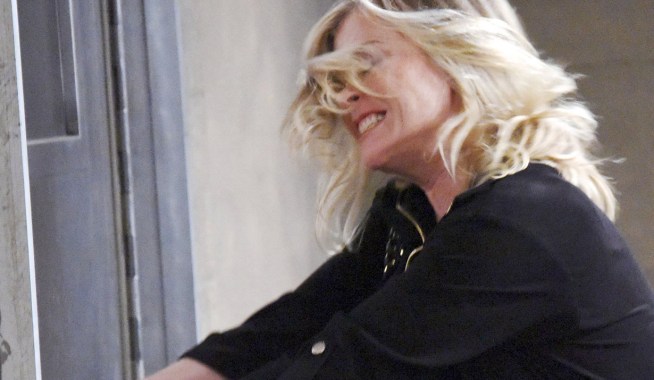