Marlena Is Rushed Into Surgery After Being Shot by Sami

Monday August 27, 2018: Everyone is beside themselves when Marlena is accidentally shot, Susan is revealed to have been locked in a freezer, and Kristen takes a hostage. 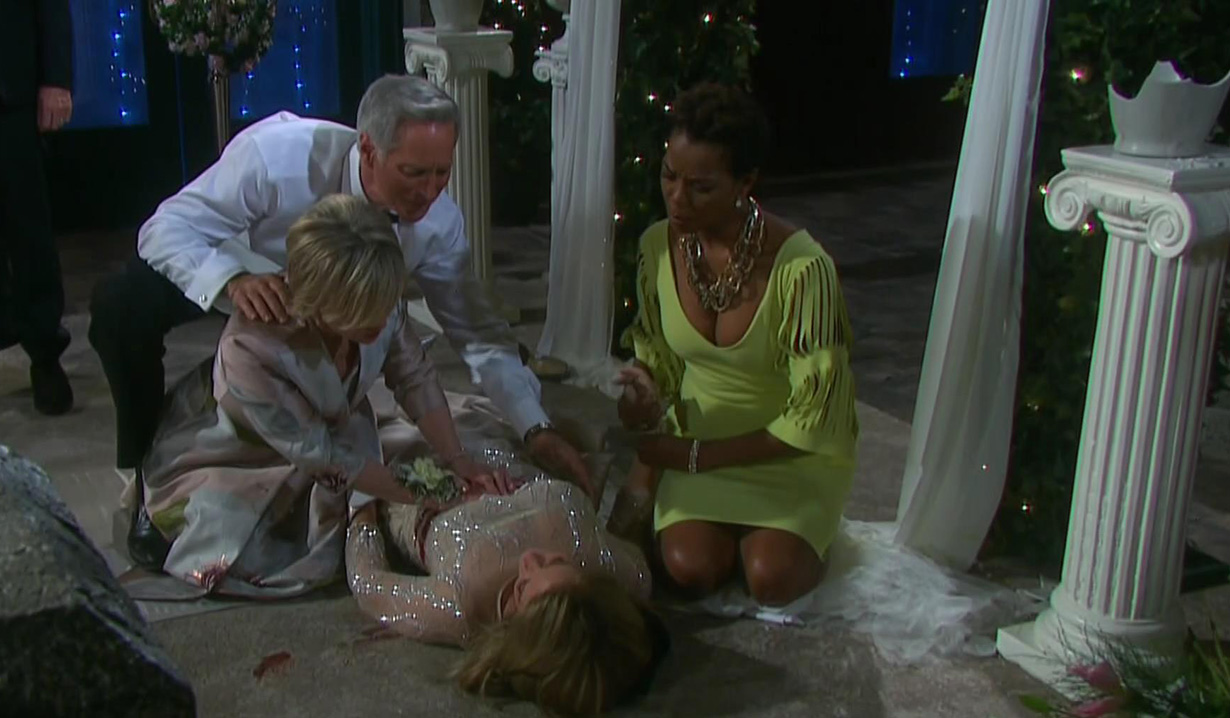 At the square, Kristen promises to take Sami to see EJ if she pulls the trigger and kills John. She says she did everything she could but EJ still loves her. Eric rushes Sami and grabs for the gun but it goes off.

At Doug’s Place, Will and Sonny kiss and this is what Sonny says he wanted when they saw each other in Memphis. Will’s so sorry he’s had to suffer. Sonny wants to tell everyone. He tries to kiss Will again but Will pushes him away. They can’t do this. Sonny is confused and puts on the pressure. At SPD, Hope and Rafe talk about sending some drug dealer back to prison. They happily realize that Abe should be pronouncing John and Marlena husband and wife. They can’t wait for the reception. Rafe wonders if Sami will turn up after all. It’d be awkward but Hope can’t let John and Marlena down. She loves them.

Back at the square, everyone is shocked to see that Marlena’s been shot. John begs Kayla to help her. During the confusion, Kristen grabs the gun. She didn’t think Sami had it in her. Sami calls it an accident. Drugged, Eric holds her up. Kristen grabs Claire as her ticket out of there. She drags her out of the square as Belle, Shawn and Brady rush after her. Val helps Kayla put pressure on Marlena’s wound while Jenn calls 911. Paul worries to Steve about Will who has been gone a while. He rushes to find him. Marlena wakes up and John cries but stays strong with her. He vows she’ll be okay. They profess their love for one another and she falls unconscious. Later, Steve sits alone as Paul returns. He couldn’t find Will. Eve appears with the basket of cell phones and the men find theirs. Paul finds Will’s and worries more.

Back at Doug’s place, Will says the wedding guests will be pouring in soon and he has to think about Paul who is likely wondering where he is. He has to go. Sonny doesn’t want him to. He asks what this means for the three of them. Will’s not sure how to answer that. Susan rushes out in some underclothes and tells them that Kristen is back and she’s mean, mean, mean as ever. She locked her in the freezer, but thankfully, one of the cooks needed a ribeye. Will’s confused. He just saw her at the wedding. Susan explains how she saw the Marlena doll left behind and it hurt her. Kristen came upon her and told her that nobody cares about her. Susan freaked out, realizing she did see Kristen New Year’s Eve. Kristen taunted her and Susan made a cross from her fingers. Kristen laughed and told Susan she would help her. Sonny stays with Susan while Will rushes off.

Belle finds Claire in the park. She twisted her ankle and Kristen dumped her off. Belle says her grandmother’s at the hospital. Shawn and Brady appear and Claire points them in the direction of where Kristen went so they can follow. Brady, Eve and Belle head to the hospital while Shawn takes Claire home. Will finds Paul with the cops. Will informs Paul about Susan and Paul fills him in on his grandma’s shooting. At the hospital, Jennifer begs Sami to have someone examine her. Sami says the drug has worn off. Eric has a lot of questions but she can’t deal with them right now. She remembers how pale EJ was when he died and worries for Marlena who was just as pale. She asks if Eric thinks EJ is really alive. Meanwhile, Kayla and Val stabilize Marlena for surgery as Abe and John look on sadly, nearby. Steve arrives so Abe takes off to talk to Hope about an APB on Kristen. Steve tells John that Claire’s fine. He’s glad to hear. Outside, Sami cries that she never meant to hurt mom. Eric knows. Belle walks up and blames Sami. If she dies, her blood is on Sami’s hands. She yells that all Sami cares about is herself. Belle slaps her across the face. Eric comes between them. Sami reminds her sister it was an accident. Meanwhile, in her room, Marlena’s monitor starts going crazy.

Brady and Eve arrive at SPD and fill Hope and Rafe in on the wedding drama and ask for an APB to be put out on Kristen. Rafe goes to the hospital. Eve worries about Theresa and Tate and goes to call and warn her that Kristen is alive. Once she’s gone, Kristen calls.

At the Kiriakis mansion, Sonny hands Susan her glasses and some tea to warm up. Sonny assures Susan she’s safe. She feels guilty about “that vampire” Kristen hurting Marlena. At least Will has “one burning hunk of a boyfriend” in Paul to take care of him. Sonny swallows hard. Kristen feels bad about forcing Will into the closet but she’s happy he has found love.

Back at the hospital, Rafe finds Sami. He has to arrest her!

As Sami Reveals Susan Is Kristen,...

Marlena Goes Into Surgery to Remove...