As Sami Reveals Susan Is Kristen, Will Remembers Everything

Friday August 24, 2018: Sami reveals Susan isn't who she says she is, Will remembers his old life, and his love for Sonny. 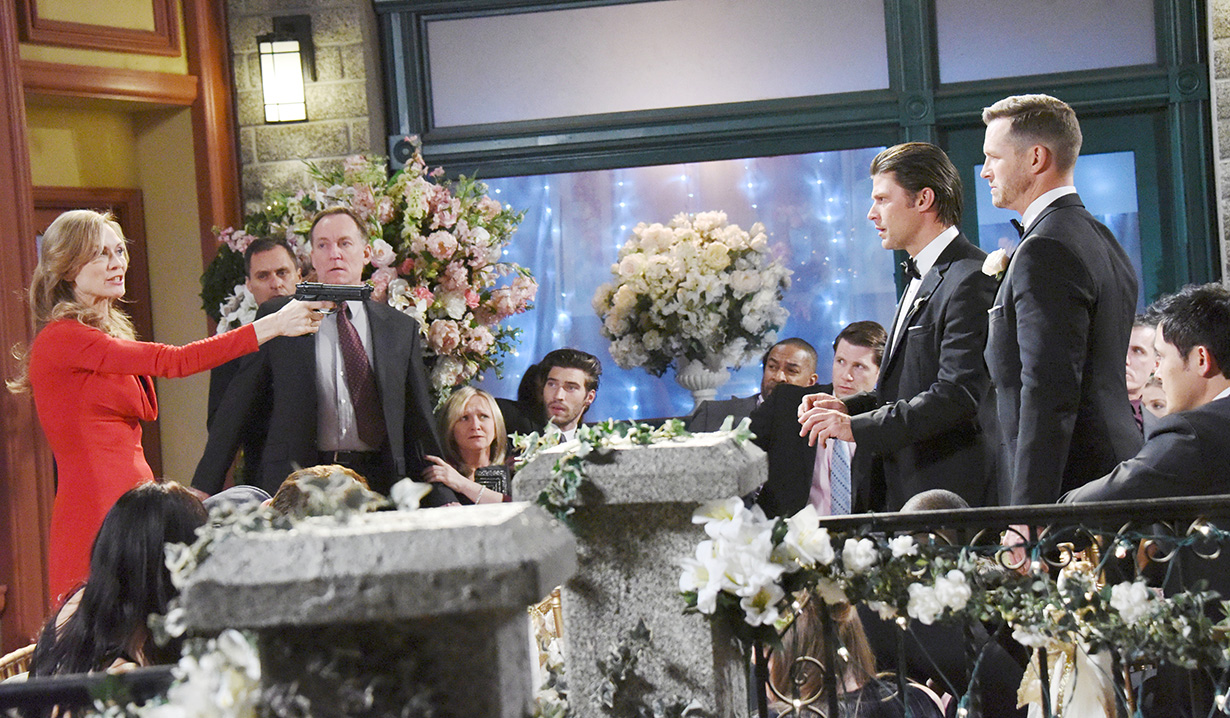 Sonny comes upon Will crying at the park and looks at him blankly. Is he alright? Will feels weird. He runs off to get water with Sonny trailing after.

At the square, Sami crashes the wedding, yelling for her mother not to marry John as Susan reaches into her bag on the sly and takes out a gun. Sami falls to the ground and her eyes can barely focus. She gets up. Abe holds her as Marlena asks if she’s drunk. Sami can barely speak, warning that if she marries John she’s going to die. Sami figured out ‘her’ plan and got away. “She’s gonna kill you, you have to get away,” she begs. Eric grabs Sami who declares that ‘she’ drugged her. Kayla wants to bring her to the ER. Sami looks through the crowd. Her sight settles on Susan and she screams, “It’s you. You are not going to get away with it.” She grabs Susan and they struggle. Marlena yells that she invited Susan but Sami retorts that she’s not Susan. Paul looks through his pockets for his cell phone as Sami rips off Susan’s wig – it’s really Kristen in disguise. Sami knocks Kristen in the face and her teeth go flying right on Marlena’s bouquet. “Ew,” she exclaims. Kristen grabs her gun and grins. “Yes, it’s me, Kristen DiMera. I’m back.” Eric wants to get Sami out of there. Kristen refuses then asks if Jennifer loves Eric’s birthmark. Shawn holds Belle close as Steve dives for the gun and Kristen shoots a vase. Steve backs off. “Easy cyclops,” she says. She tells Marlena that Susan is the one who visited Marlena at her home but she survived Marlena “pushing her” out of that tower window but Marlena won’t be as lucky. John and Abe ask her to put the gun down and Marlena claims she won’t press charges. Kristen calls Marlena the worst excuse for a human being and thinks it’s time she got hers. Sami covers Marlena with her body. Brady steps forward and Kristen grins and seductively says she’s glad he’s there. Brady can’t believe she’s calling herself a victim when she’s the one with a gun in her hand. He knows she’s just trying to love herself. She blames him for screwing her over. Her need for revenge did, he clarifies. He changed his mind because of what she did to Eric. They try to talk her down. Kristen asks how Eve’s sister’s doing – she calls her the mother of Brady’s child and thinks it should have been her child. Kristen tosses Sami the gun while Brady and Eric grab Kristen and tells her to kill John. John squints his eyes as Kristen reminds Sami of finding her mom having sex with John in the conference room, which broke up her family. Sami says she and John worked that out years ago. Kristen tells her EJ is alive. Sami doubts that. She held her captive for weeks and would have already told her. Kristen will take her to EJ if she shoots John. Sami won’t do it, but she struggles with wanting to see EJ. Eric rushes Sami and grabs the gun and it goes off.

At Doug’s Place, Will drinks some water and after some prodding, admits to Sonny that he remembered their wedding. Sonny begins to cry as Will fills him in. Will has to go but Sonny begs for any crumb of what he remembered. They go back and forth for a while. Sonny asks why he’s afraid. Will says it’s fragments but Sonny thinks he remembered feelings. Will says Paul is waiting and he feels lucky and he and Paul are in love. Sonny knows he’s being unfair but he was robbed from his past and now Will’s running from his past. Will says he looked at Marlena and saw his grandmother, not just a woman he met months ago. He felt her love and everyone else’s. “And you. I felt your love,” Will whispers. He felt his love for Sonny. They flash back to their wedding. Will remembers Grandma Caroline’s speech and his mother. He remembers coming out to her and remembers his parents, wanting them together – everything. Arianna. He recalls the first time he held her. He has to find them all and tell them how much he loves them. He remembers Nick Fallon then kissing Sonny after the wedding. They share a loving kiss.

Marlena Is Rushed Into Surgery After...