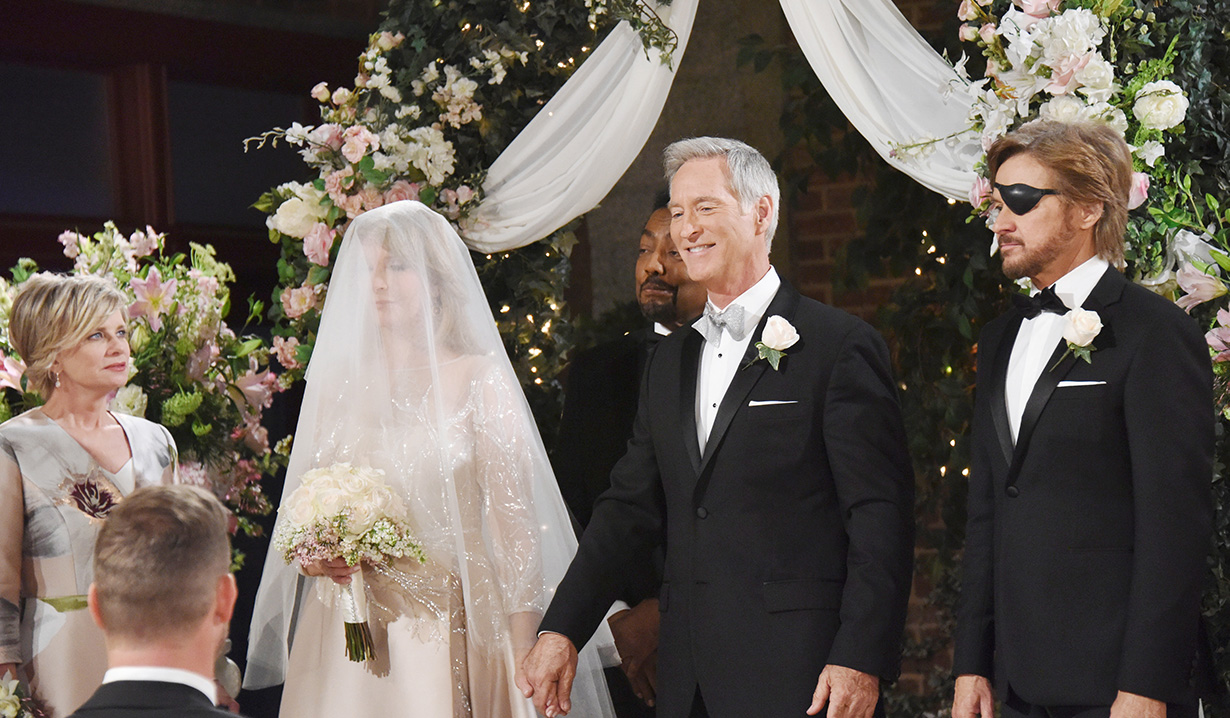 At the Horton Square, John tells Abe and Steve how excited he is to be finally marrying Doc. Steve calls Kayla beautiful but wants to know what she’s hiding. John agrees with Kayla that this isn’t the place. Steve will wait until after the vows. Val arrives. She wants to sing “Up Where We Belong.” Abe refuses. She’s no Marilyn McCoo or Tamara Price. Val’s indignant but Abe says she can sing it at their wedding. She asks if that’s a proposal. “Let’s not get ahead of ourselves,” he tells her. There are no guests except for Belle when Marlena walks up flanked by Eric and Brady on each side. She gets to the altar and Abe begins. He asks if anyone, including Orpheus wants to interrupt. “Can I get a motorcycle? A videotape? Something?” Abe yells. Everyone laughs. Both John and Marlena say I dos and Roman walks up, his head is covered in bandages. He rips them off and says she can’t marry this loser. “He’s not the real John Black. I am.” He calls John “The Pawn” and John snipes that Roman’s obviously had too much clam chowder. Marlena calls him her soul mate, then her voice cadence changes. She tells everyone she’s Hattie Adams and kisses Roman. John grabs the nearby Marlena doll. It’s just you and me, Doc Doll.” Marlena wakes up at home with a start, screaming, “No!” Susan wanders in. The maid let her in. Marlena will have to talk to her. She admits to having a nightmare about the wedding. Susan’s sorry but says, “You and John go together like peanut butter and bananas.” She’s also sorry for pretending to be Susan and marrying John, calling Kristen “Mean, mean, mean.” Susan told her that when she visited her at the hospital. Marlena narrows her eyes.

At the pub, Roman forces Eric to eat breakfast before he heads to the wedding. They laugh about last night’s bachelor party and John’s shiner. Eric’s sorry things didn’t work out between his dad and Anna. Roman says they’re on good terms. He confesses he’s not going to Jarlena’s wedding. Eric’s upset but can’t change his mind.

At the Salem Inn, John’s eye is bright red, but Abe, Steve and Brady lie that it looks better. John’s stressed. He can’t get married this way! Steve assures his friend that some women like a man with one eye. Brady says they’ve got to do this today. Abe knows someone…

Claire’s surprised to see her dad turn up at the loft. Shawn demands to know where Ben is. He’s not there, she says. In walks Belle. She heard from her mom that Ben was living there. They’re both beside themselves, upset. No wonder she got the death card last night. Claire says Grandma Marlena insists he’s not insane anymore. Claire reminds them she’s also over 18 and can do what she wants. Belle storms off and Shawn calms down. In his heart she’s still a little girl. They hug.

More: The unusual things that happen to Salemites

At Doug’s Place, Kayla and Val find the Marlena doll and discuss last night’s tarot reading and her wedding in that very same room with Steve. She worries about her relationship because they’re having problems. Val knows Steve loves her. Kayla cries and Belle appears. She says Shawn’s at Claire’s trying to talk sense into her. Kayla says she and Steve haven’t discussed Tripp living with Ben. Val gets a call from Abe, asking her to get to the Salem Inn. Val goes and Kay and Belle head to Marlena’s.

Back at the townhouse, Marlena asks if she really thinks she saw Kristen DiMera. Marlena thinks her mind played a trick on her but Susan swears on Elvis’ grave that Kristen DiMera is alive. Belle and Kayla turn up. Marlena shares that Susan says she saw Kristen, on New Year’s Eve at the hospital. Susan says maybe it wasn’t real. Kayla sends Susan to Doug’s Place to center centerpieces. When she’s gone, Belle gives Marlena a heart charm with their wedding date on it from her dad and Kayla gives her a handkerchief as something old and borrowed but Carrie was supposed to bring something blue. They can take a ribbon from the Marlena doll.

Val arrives at Salem Inn to help John with his black eye.

At Doug’s Place, Susan gets out a measuring tape and centers the centerpieces which are hourglasses. Brady’s looking for Val’s makeup bag. Susan brushes him off and he finds it and goes. Susan finds the Marlena doll and becomes angry that Marlena left her there on purpose, which is “Rude, rude, rude.” Maybe Marlena’s not her friend at all!

Brady returns to Salem Inn with Val’s makeup. She fixes John’s eye in the bathroom while Brady tells the other men about Susan being at Doug’s Place. Steve calls her “whack.” Brady worries she’s dangerous. John walks out – his eye looks perfect. Everyone cheers. Brady tells John about Susan’s invitation to the wedding and John calls Doc worried, but she insists Susan’s fine.

Back at Doug’s Place, the Marlena doll has a knife in her back.

John and Marlena gather friends and family to watch them get married.

Someone experiences a miracle.

Susan Banks Surprises Marlena at Her...