Tuesday August 21, 2018: Will and Marlena are surprised Susan's back, the bachelor and bachelorette parties are fun and interesting for all involved, and Belle is home. 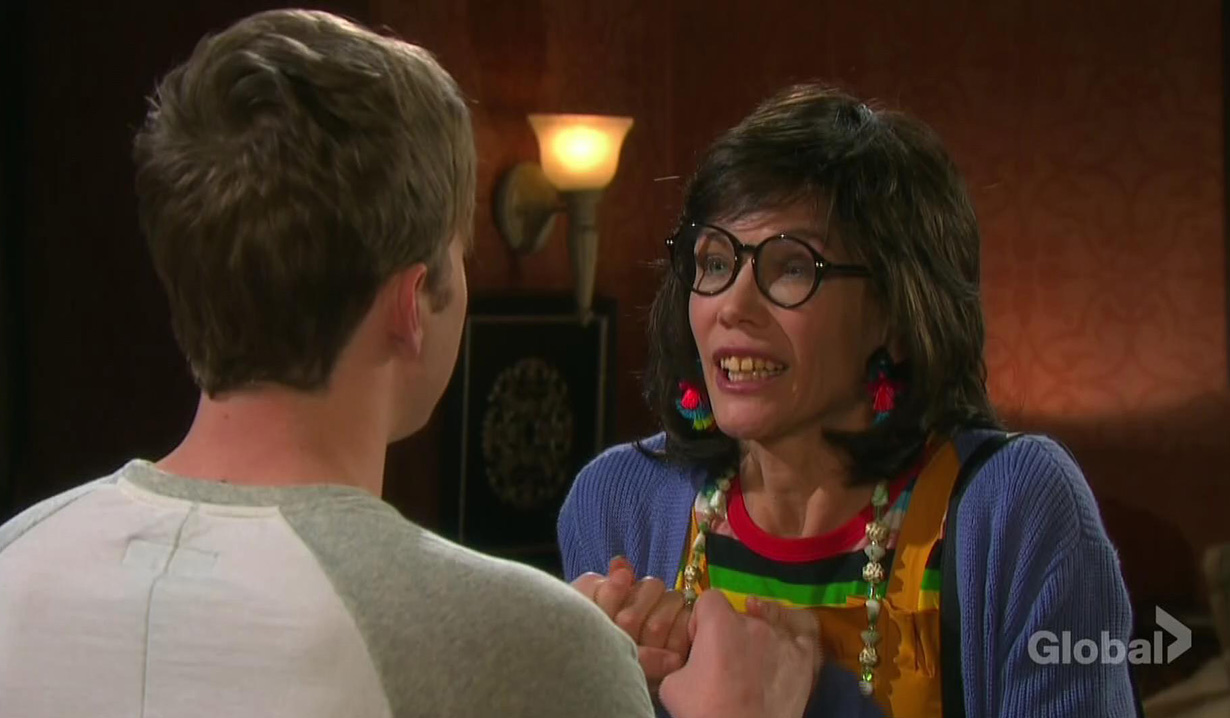 Paul and Will kiss at Martin place when Susan Banks, (played by Stacy Haiduk), arrives. “I’m back,” she says, grinning. She shows him some paperwork that she was let out of the psych ward and wants to make amends. Roger couldn’t get time off from Graceland. She’s there to apologize for turning Will into EJ. Will admits she took good care of him. He knows she loves him and sometimes he misses her. She hugs him tight. He tells her he was on his way to John Black’s bachelor party. She’s thrilled they’re remarrying.

More: Listing the crazy things that happen only in Salem

Steve finds Kayla at the hospital. He fills her in on bringing Bonnie Lockhart back to Salem and prison. Kayla thinks it’s wonderful, but she’s distant. Steve pleads with her to talk to him but Val pops up and they head to Marlena’s party.

Eve, Jennifer, Claire, Brady and Eric dress up Doug’s Place for Marlena’s bachelorette party. Eve and Jenn clash while Claire boasts about having a surprise for her grandma. She hopes she catches the bouquet. Eve suggests she make sure her man loves her more than any other woman. She pointedly looks at Jenn. Eric brings up the book she bought Jenn on how bad girls keep a good man and Brady is unimpressed. Eve promises to be on her best behavior so the guys go.

At home, John reluctantly agrees to spend the night at Salem Inn tonight. Marlena takes a call from Carrie who can’t make the wedding because Noah is sick. Marlena’s upset but John cheers her up. Kayla and Val meet and everyone takes a table where they begin painting Marlena’s favorite flower – lilacs. Belle rushes in, surprising Marlena. They embrace and Belle hears that neither Sami nor Carrie is coming. They ponder why Sami can’t make it. Belle catches up with Claire and Marlena asks the women if they know who sent the Marlena doll to her. Nobody has an idea. Eve thinks whoever did is crazy. Just then, Susan walks in. “Dr. Marlena Evans, you got my gift!” She sent the doll. She thanks Marlena for getting her help and apologizes for kidnapping Will and turning him into EJ. Marlena forgives her. Susan grabs her in an embrace and Belle tries to get her to leave. She likes painting though, and wants to stay but hopes Sami’s not there. She wishes she could be at the wedding. Marlena understands. Susan thinks that means she can come so Marlena goes along with it. She privately tells Belle that she spoke with her doctor and knows Susan’s harmless. Marlena notes that Kayla’s head isn’t in this. Kayla has to tell Steve but worries he won’t understand. Susan pokes her head in. Her old pal Celeste taught her how to divine the unknown. She does a tarot card reading for Kayla. She can tell Kayla’s keeping a secret from her husband. The women stare. Claire goes next. Susan gets the death card but Val points out that it doesn’t necessarily mean someone will die. Marlena gets the lovers card which makes her feel better about tomorrow. She goes home and Eve keeps pushing Jennifer’s buttons. Nearby, Susan plays with the Marlena doll and sings, “Here comes the bride.” Kayla and Jenn catch up about their secrets. Kayla thinks Jenn’s doing the right thing by keeping hers. Meanwhile, Susan realizes the lovers card was reversed, which means the marriage is doomed.

At the Brady’s pub, Roman is thrilled for John and Marlena’s wedding, knowing they’ve overcome many obstacles to get to this point. John thanks him. It means a lot. They shake hands. Abe tells Brady and Eric he’s glad they got over their differences. They play darts. Will arrives and tells John that Susan Banks is in town to apologize. He told her to wait until after the wedding. John and Paul go outside while Roman asks Will what’s up. Will opens up about Sonny’s profession of love and they agree there’s no reason to tell Paul.

At the square, Paul and John throw a baseball around. John laments not knowing him when he was a kid. He asks Paul to throw him a 100 mile per hour fastball. Paul throws it as Abe appears and distracts John. The ball hits John in the eye, promptly giving him a black eye.

John’s taken back to the pub and all the men check him out. Roman gives him an ice pack and John worries Doc will kill him. He and Steve go and Abe, Will and Roman are excited for the wedding.

Steve and John head to Salem Inn where John complains that Doc can’t see him with this black eye. Steve suggests they drink. Marlena arrives. The guys scramble. Steve gives John his eye patch and John lets Marlena in. He says the guys had a bet and he lost and now has to wear Steve’s patch. She giggles. They smooch.

Eric and Brady arrive at Doug’s. They hug Belle and talk about their evenings.

Someone has a nightmare…