Friday August 10, 2018: Ben and Ciara almost kiss, Chad and Gabi stay at Sonny's overnight, and Rafe and Hope make up. 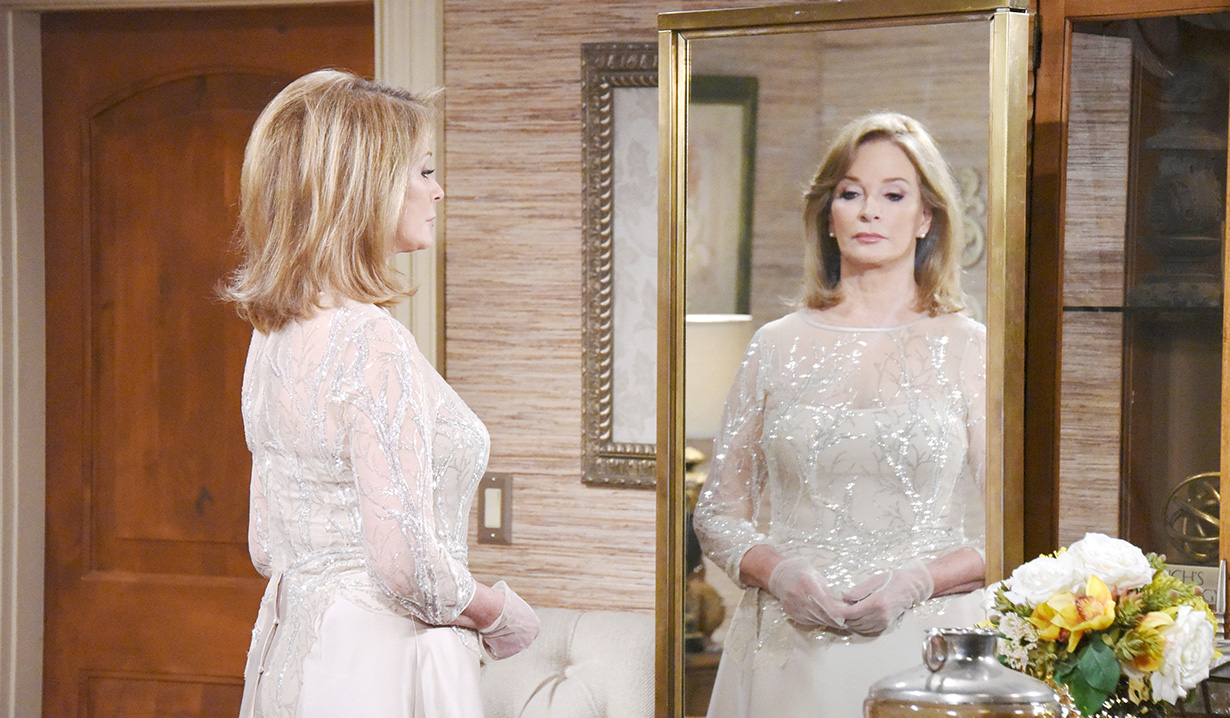 Marlena worries that John has ruined their wedding when he walks in on her in her wedding dress at home. John laughs. He doesn’t believe in superstition. Marlena starts to laugh as well, and admits she’s just anxious that something could go wrong at the wedding. John considers she’s protecting herself from being hurt again. Marlena is shocked. He’s right. “Bad luck will never be a match for true love,” he tells her, with a kiss. They wind up in bed and make love then discuss Sami, just as she calls. Marlena answers her call, happy to hear from her. Sami’s been busy. She tells her mother she’s not coming to the wedding because of her fling with Rafe. Marlena’s shocked. Neither she nor John believes that’s the real reason. “I think Samantha Gene has something else going on.”

At Doug’s Place, Hope tells Rafe that she gave Ben the option to stay in Salem and she’ll keep the investigation open, or leave Salem permanently and she’ll drop the case. Ben chose to leave. Rafe worries Ben could have a good harassment claim against her if he changes his mind and decides to stay. Hope scoffs. She asks how Gabi’s been. Rafe says she’s fighting with Ari and dealing with repercussions from her time in the clink. Later, Rafe tells Hope that he hurt her and broke her trust. Hope never should have pushed him away.

More: Major All My Children alum partners with Hallmark

At the square, Ciara’s upset that her mom told Ben she’d drop the arson investigation if he left town permanently. Ciara assumes it means there’s no proof that Ben set the fire. Ben knows he won’t be able to get a job anyway. Besides, he doesn’t want to be seen as the Necktie Killer. Ciara rants about her mom but Ben can’t blame her. Ciara’s worried for Ben. She gets up and falls and Ben jumps up to save her and they both take a tumble. Ben winds up on top of Ciara and they share a long moment where it appears as though they’ll kiss. Ben helps her up. She convinces him to stay. Chad strolls into the Kiriakis mansion just as Sonny’s asking someone for money on a call. Sonny disconnects and Chad questions him.
Sonny lies that he’s trying to get financing for a new business. Sonny asks why he’s there and Chad confides that he has nowhere else to go. He walked out on Abigail. Sonny’s shocked. Chad stammers that it’s too much. Gabi eavesdrops from the foyer then heads in. She needs to see Arianna. Gabi’s done with the separation. Both men agree it’s time to repair their relationship. Sonny goes to get the kid while Gabi admits she heard that Chad moved out. “Stefan happened,” he says. Gabi rushes into his arms with an apology, hiding a smile. Ari appears and Gabi wants to tell her why she had to leave her again after she promised not to. Ari yells, “No!” Chad interjects and Arianna calms down. Gabi tells the truth that she was in prison. Sonny helps explain that she was set up. Gabi misses her girl. Ari hugs her mama and Gabi cries happy tears. Ari invites her to sleep over and Sonny asks Chad to stay too. JJ arrives at Alice’s to check on Abigail. She reveals the reason Chad left her. JJ is surprised she’d allow Stefan to touch her belly. Abigail’s not sure Chad can get over this. JJ holds her. He admits he saw Chad and Gabi together looking close. Abigail finds that peculiar. They embrace and JJ promises things will get better. He goes and Abs stares at her wedding photo.

Back at Doug’s Place, Hope and Rafe are dancing when Gabi calls to fill him in on her breakthrough with Arianna. Rafe’s happy. She’s staying at Sonny’s. Rafe disconnects and Hope invites Rafe to stay over – permanently. Rafe can’t believe his ears. “We are still legally married,” she says. They grin at each other and kiss passionately.

From the Kiriakis house, Chad calls Abigail to say goodnight as Gabi watches.

Will Goes to Kate for Blackmail...