Thursday August 9, 2018: Marlena lets Kayla know her thoughts on Ben's rehabilitation, Hope vows to get to the bottom of who set the fire, and Tripp wants to make love to Ciara. 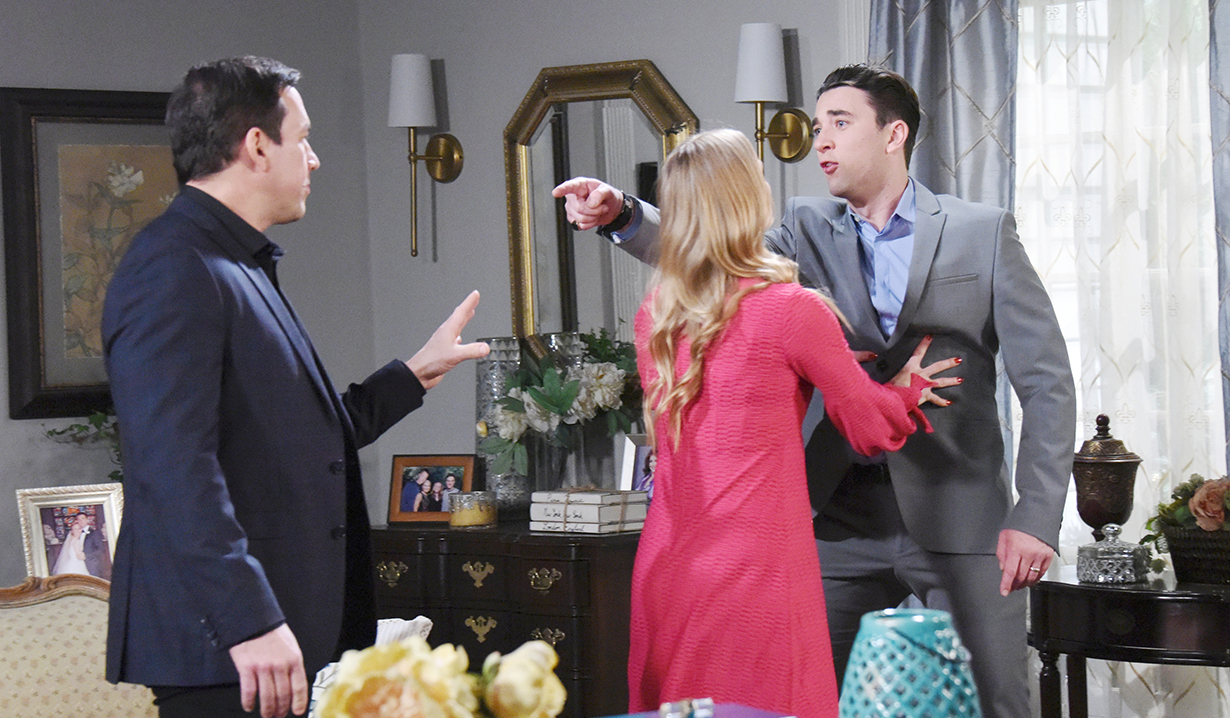 In Marlena’s office, she and Kayla discuss Hope’s betrayal over Marlena’s assessment that Ben’s rehabilitated. Marlena knows Hope’s frightened for her child but the psychiatrist is convinced Ben’s not out to get Ciara.

In SPD, Ben tells Hope he has no recollection of starting the fire, thanks to Dr. Evans. Hope’s not buying what he’s selling. Ben knows he can’t convince her he’s innocent but he also knows there’s no evidence to arrest him because there isn’t any. Even Ciara believes in him. Hope freaks – why is he so fixated on her daughter? He’s not. They’ve become friends. Hope considers that and blackmails him. She’ll close the case if he leaves Salem.

At the loft, Tripp asks Ciara if she still wants to make love after Ben’s intrusion. They pick up where they left off, kissing until Ciara flashes to spending time with Ben. She pulls away fast and Tripp asks if they’re moving too fast. She denies that but reveals she can’t stop thinking about Ben and his innocence. Tripp’s aghast that she believes in the serial killer. They argue about whether or not Ben is still a serial killer and Ciara goes.

Rafe startles Gabi ruminating in the park about “telling the truth.” Rafe questions her and Gabi flashes to doctoring the paternity results for Abby’s kid and covers, saying it’s about work. Rafe shakes his head, knowing his sister is lying. She denies it and he goes off to get them ice cream then returns and promises he’ll be there for her more than he has been. Gabi asks how things are going in the fire investigation Rafe admits they hit a dead end. The siblings agree it sickens them that the psychopath is walking the streets. Talk turns to Hope and Rafe says they’re working on things but the Weston case has them busy. Once Rafe goes, Gabi calls to talk to Ari.

Chad walks in on Stefan touching Abigail’s baby belly at Alice’s house. Chad moves to hit his brother until Abigail comes between them. They explain that the baby kicked and Stefan asked permission to feel it. Hurt, Chad lashes out at Abby for allowing it. She explains that Stefan will not be a part of her life but he will be a part of the baby’s. Stefan will respect her wishes. On his way out, he thanks her for “sharing that special moment,” causing Chad to flip out. Abby reminds her husband she loves him. Chad says he just came from a session with Marlena who thinks he’ll be able to love that child as his own but after seeing Stefan with her, he’s done. He feels so much rage toward Abigail, he can barely get a full sentence out. He loves her and Thomas but he’s leaving and suggests she can tell everyone he’s just like every other DiMera. Abby tears up but understands his decision. He packs and Abs says she’ll never stop loving him. Chad’s sorry. He goes and both break down.

At Marlena’s townhouse, Marlena shows Kayla the dress she wore in the 80s when she and John were first married. Kayla laughs about the shoulder pads but Marlena loved everything about the gown. She flashes back to the wedding and Kayla tries on her dress. Marlena’s entranced. They’re happy Steve will get to see her in it. Kayla grumbles about Stefan holding her secret over her so Marlena suggests she tell Steve the truth. Kay’s not sure Steve would forgive her. At the pub, Steve admits to John that Kayla’s keeping a secret from him. He details what he overheard from Kayla and John’s at a loss of what to say. Steve needs to know what she’s hiding. He calls Kay, and asks her to meet later. Kayla changes and Marlena puts on her wedding dress. They swoon and Kayla goes to meet Steve. Steve has another warning about causing trouble for Abigail and threatens to “end him” if he does. Stefan leaves and sees Kayla outside. Stefan asks for regular updates on his child’s progress since Abigail won’t allow him to be at the ultrasound appointments. He threatens to take Steve’s eyesight if she doesn’t.

John walks in on Marlena at home in her wedding dress. He finds her gorgeous but she gasps and lightly accuses him of ruining the wedding.

Hope meets Rafe at Doug’s Place and is excited that she closed the case, which means Ben will have nothing to do with her daughter.

Ben runs into Ciara at the square. He reveals he’s leaving Salem.

John sees Marlena in her wedding attire by accident.