Wednesday August 8, 2018: Stefan wants to be a part of the baby's life, JJ catches Gabi with Chad, and Hope begs Marlena to send Ben back to the psych ward. 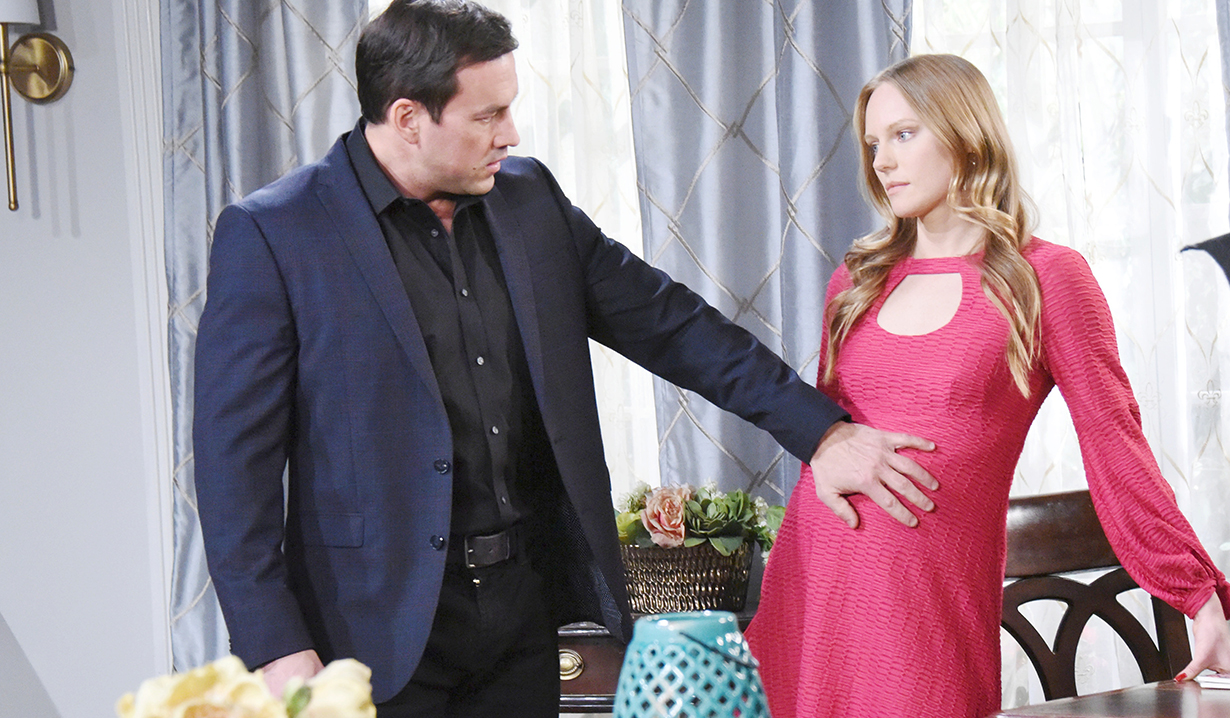 Hope turns up at Marlena’s office and pleads with her to send Ben back to Shady Hills or things will continue to be strained between them. Hope worries Ben’s manipulating her daughter. She assumes he set that fire but Marlena disagrees. She shares hypnotizing Ben and her belief that with psychotherapy and medicine, Ben can live a productive life. She’s sorry. Hope is as well. She takes off.

Ben drops by the loft and Tripp tries to send him packing. Ciara looks torn while Ben explains that he knows for certain now that he didn’t set the cabin fire. Tripp fires off at Ben, telling him to get lost so Ben takes in Tripp’s state of dress and assumes something’s going on. Tripp boasts that there is. Ben asks Ciara if she’s sure this is what she wants. He reminds her of how Tripp was in bed with Claire. Tripp can’t believe Ben knows about that. Ben shrugs. Of course she told him. They spent day and night together. Ben gets a text and recommends Ciara not to do anything she’ll regret. Tripp shuts the door and Ciara apologizes. Tripp understands she needed to vent. He asks if she still wants to make love.

In the park, Gabi offers to lend an ear to Chad as she rubs his arm. That means a lot to Chad. JJ interrupts and demands to know what’s going on. They scramble and say they’re just talking. JJ’s sorry for jumping down their throats. Chad goes and JJ says he doesn’t want to see her get hurt again. They discuss Arianna and Gabi admits things aren’t better between them. She whines about probably never having kids and gripes about not having a boyfriend. JJ learned a lot this year and advises that she should be grateful for what she has and appreciate those who she loves. He goes.

Stefan shows up at Alice’s house and Abigail slams the door in his face. He lets himself in and asks after her, the baby and how Chad’s taking the pregnancy. Abby says she and the baby are fine. Chad’s having a hard time adjusting but once the baby’s born he’ll be a nurturing father. Stefan raises an eyebrow at the word ‘father’. He wants to be at the ultrasound. She gives him a resounding no. He remarks that she can’t cut him out of his baby’s life. She declares that she can cut him out of hers. She details what he can and can’t do and when he tells her she sounds like Gabby, she smacks him. As they talk, the baby kicks. Stefan tries to touch her belly and she pulls away.

Lani drops by Eli’s at Martin House with David Abraham’s death certificate and tears in her eyes. She cries that she was hoping to get a birth certificate but since he never took a breath, it was like he was never born. Eli hugs her and admits he didn’t realize how much this would affect him, too. He kisses her gently. She responds but then pulls away, angry. If he’s not careful, he could be brought up on harassment charges. Eli’s pissed. They’ve already had sex! “And that was the worst day of my life,” she spits. Lani takes it back and Eli professes he’s sorry for kissing her.

Chad arrives at Marlena’s office to discuss his inability to get past his issues about Abigail’s pregnancy. Marlena tells him that talking about it is a good start. Chad worries that now that Abigail’s integrated, it means that Abigail loves Stefan. Marlena has no answers but reminds him that she loves him and regrets sex with Stefan. Doc wants him to think about trying to open her heart to the baby. Chad tears up. Marlena thinks he’s got this.

At SPD, Rafe tells Hope that it may be time to close this cabin fire investigation. Hope scoffs. The silver lining is that Ben can leave town. Hope doubts obsessed Ben will leave. Rafe’s sorry. He invites her for dinner tonight. They share a moment and he gives her a quick kiss on the mouth before leaving. Ben appears at Hope’s behest.

JJ finds Lani sobbing outside the pub. He holds her.

At the park, Gabi prays. Revenge has made her feel awful and she wonders if she should tell the truth. Rafe walks up, curious.

Hope has an ultimatum for Ben.