Victor Makes a Demand of Eve in Exchange for His Silence

Monday August 6, 2018: A private conversation between Kayla and Jennifer leaves Steve troubled, Chloe makes a confession to Eric, and Will and Sonny are blackmailed. 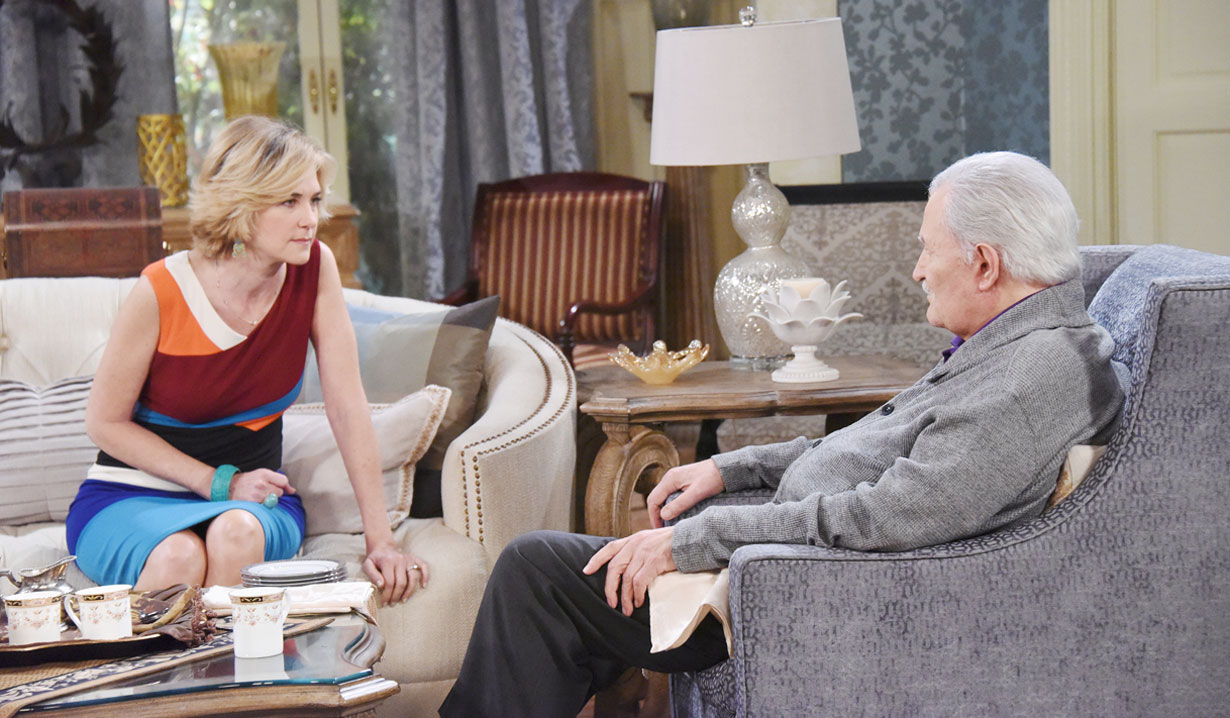 At Mandalay, Will, holding the anonymous letter, wants to go to the police. Sonny refuses and apologizes for getting Will involved in the mess with Leo. Ted appears and taunts, “Did you really think this was over?” He grabs the letter from Will, admits he sent it and accuses them of killing Leo. Ted suggests they talk in private and leads the guys to the park. Ted admits his investigator followed Leo the night he died. When Leo didn’t emerge from the Kiriakis mansion, the investigator led Ted to the car and Leo, who appeared to have blunt force trauma to the head. Ted won’t tell them where Leo’s body is but recalls how he was supposed to make a fortune off Leo’s lawsuit. He threatens to turn them in – unless they pay him, big time. Will and Sonny plead their case and how Leo tried to kill Will, but Ted says, “It’s over.” Sonny will work with Ted’s terms but insists that Will is no longer a part of this. Ted refuses Sonny. It’s to his advantage to keep them both on the hook.

Outside the pub, Adrienne learns that Steve found a lead on Bonnie and wonders where she is. Lucas appears and wants to know as well. Steve shows them some photos of land parcels from El Paso, Texas and talks about a real estate scheme. Bonnie double-crossed some rich Texans and ran off with their money, and can’t be found. Steve vows to keep looking for her and leaves Lucas and Adrienne to reflect on the drama Bonnie caused and their past relationship. Both are in a good place with those they love now and share a hug before Lucas leaves.

Eric and Chloe catch up at Doug’s Place. Chloe’s excited to learn Eric and Jenn are engaged. They talk about Nicole and how strange it was that she left town. Chloe believes Eric still loves Nicole. Eric says he’d be glad to see her if she walked in the door but he’s committed to Jenn, body and soul. Talk turns to Chloe and Lucas. Chloe admits she’s not sure where their relationship is going. It’s as though Lucas is holding back. After Chloe professes her love for Lucas, Eric assures her Lucas loves her too. Nearby, Lucas smiles at Chloe and Eric then joins them. Lucas is happy to hear about Eric’s engagement. Later, alone, Lucas admits he heard what Chloe said to Eric. He’s not keeping his distance but is afraid of letting her down. Chloe couldn’t be happier with Lucas. They kiss.

At the Brady’s pub, Jenn confides in Kayla how Brady forced Nicole to leave Salem and how the info came from Eve. Though Jenn doesn’t reveal the part about Deimos’ murder, she knows Nicole still loves Eric. Kayla can’t believe how cruel Brady was and guesses Jenn is afraid to tell Eric out of fear of losing him. Jenn selfishly admits she is. Kayla’s kept secrets too. After she reflects on lying to Steve about Stefan not being connected to him getting his eyesight back, Kayla admits she’s keeping a huge secret from Steve, one that’s killing her. If Steve ever found out what she did… Jenn looks to the door. Kayla turns and sees Steve has joined them. He comments on how serious they look. Kayla walks Jenn out, with both agreeing to be there for the other, then returns to Steve. When she goes to get some drinks, Steve thinks back to just overhearing Kayla tell Jenn, “If Steve ever found out what I did…” Steve wonders what Kayla’s keeping from him.

Eric meets Jenn at Mandalay. They share a playful dance and profess their love. Jenn looks troubled as Eric takes her in his arms.

Brady confronts Victor at the Kiriakis mansion about planting the drugs at JJ’s. He knows Victor has others do his dirty work and demands, “Who are you working with?” Eve’s relieved when Victor doesn’t name her. Victor claims everything he did was out of love but Brady rants about how he still lost his son. Eve sticks up for Victor, which irks Brady. Eve tenderly places her hands on Brady’s shoulders and says, “This is all my fault.” Brady won’t allow Eve to blame herself. She’s the only good thing in his life. Brady seethes to Victor, “You’re dead to me,” then drags Eve away. Eve claims she left her purse in the living room and Brady agrees to meet her at the inn. Eve rejoins Victor and wonders why he didn’t reveal her involvement. Victor orders Eve to get Brady to forgive him or he’ll tell Brady that Eve’s just as responsible for him losing his son. Eve knows Brady loves Victor and agrees to talk to him. Her bigger worry is Jenn. Victor suggests she get to work on convincing Brady to forgive him or lose Brady forever.

Eve meets Brady at Salem Inn and is happy to hear Jenn said yes to Eric.