Claire Reacts Violently When She Finds Ben at the Loft

Monday July 30, 2018: Claire sees Ben Weston in her loft and has a conniption, Jennifer confronts Eve and Victor, and Hope feels guilty for allowing Eve to strangle Ben. 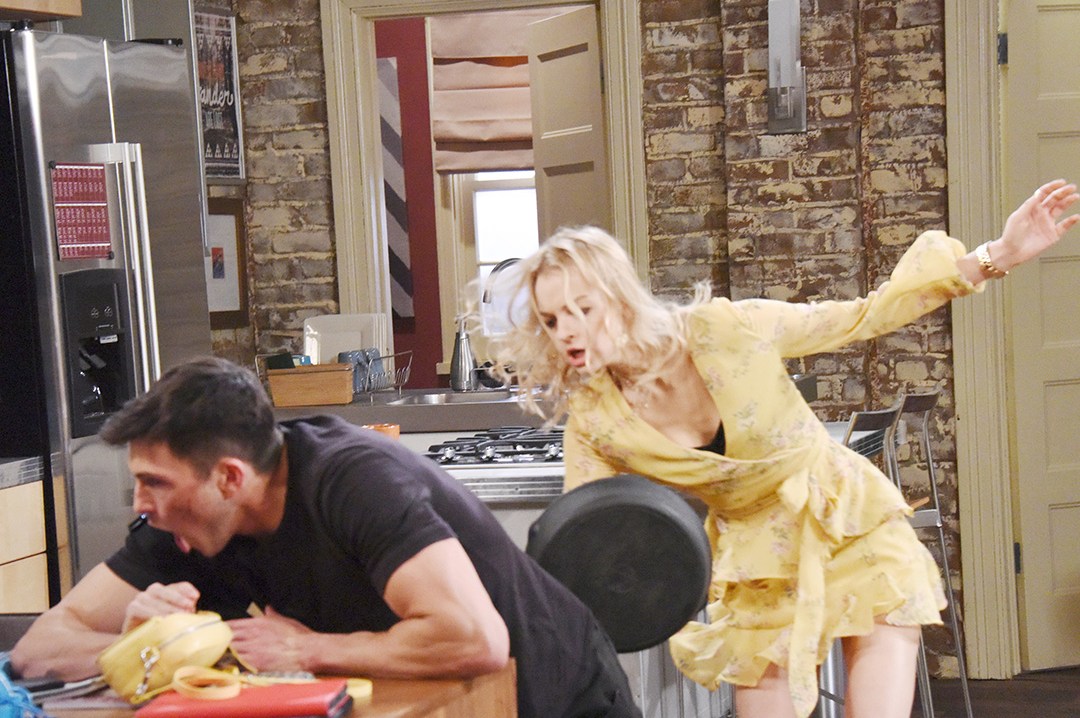 At Salem Inn, Brady’s hesitant but admits to Maggie that he suspects Victor took matters into his own hands regarding the custody case. Eric interrupts and Maggie goes to face her husband. Eric wants to repair his relationship with his brother before their parents remarry. Last time he was there, he interrupted Brady and Eve. Brady flashes to telling Eve that Nicole killed Deimos. Eric wants to clear the air about Nicole with an apology. He tears up and admits he was wrong. He’s filled with shame. Brady stops his brother. He recalls being drunk and vindictive. Both have regrets. They hug it out and Brady considers telling Eric the truth…

At the Kiriakis mansion, Eve tells Victor she can handle Jennifer Horton, just as Jenn appears. Eve snipes that she’s not wanted there and Jenn ignores her. “I know what you did, and you won’t get away with it,” she states. Victor tries to vamoose but Jenn confronts him about planting drugs in her son’s apartment. Eve defends Vic which makes Jennifer ask what her part in this was. Victor blurts out that they planted the drugs and they’d do it again. Eve turns on Victor and gasps, “What the hell, Victor?” Jenn’s going to the cops. Victor wanted to ensure Tate had the best father a boy could have. He takes off and Eve fills Jennifer in on the whole story. Jenn moves to tell Brady until Eve threatens her with the truth…

At SPD, Eli is concerned Lani’s not ready to be back to work so soon after losing her child. Lani comments that he lost his child, too. He brings up the night they “made love” and conceived David. Lani’s struck by Eli calling it ‘making love’ when he used to call it ‘having sex’. Eli admits the outcome changed the way he saw things. Lani says it did for her as well. They admit each is important to the other as they hold hands.

At the park, Hope kicks herself for standing by and watching Eve attack Ben. “She could have killed him.” Rafe concedes that Weston is a threat to Ciara. Hope shakes her head. She let her emotions get the best of her. What if Rafe hadn’t shown up when he did? Hope wonders if Abigail would be willing to share her experience with Ben with Ciara. Rafe thinks it’s a bad idea. She needs proof and facts. She calls Ciara to check on her.

Ben shows up at the loft, stunning Ciara. She’s unsure about letting him in but he assures he’s not stalking her. He just wanted to talk. She lets him in. Hope calls and Ciara declines the call and texts that she’s fine. Ciara asks how Ben got the cuts on his face. He covers. He’s hopeful someone will give him a second chance so he can get a job. Claire walks in and sees Ben. She grabs a nearby frying pan and clocks him in the head. Ben goes down and stars circle his head. Ciara yells that Ben wasn’t trying to hurt her. She checks on Ben and forces Claire to help him to the sofa and get ice for his noggin. They argue about it as Ben wakes up. He tries to leave but almost passes out. Ciara acknowledges that Ben can press charges but he refuses. Claire rushes out. Ben thanks her, knowing she’s still not 100% sold on him not being the arsonist.

More: Watch Ben get hit with a frying pan

Back at the square, Hope and Rafe decide to dig up the facts in order to get Ben out of their lives.

Hope and Rafe arrive at SPD, surprised to see Lani so soon. Lani thanks her for her support and says she’s ready to work. Eli and Rafe rehash Ben’s case in one room while Lani offers to do legwork for Hope on Ben’s case. Later, Eli breaks down and Lani comforts him over baby David’s death. Claire runs in and tattles that Ciara just let a serial killer into her home. Hope’s aghast.

Victor meets Maggie at Doug’s Place. He gives her a flower and confesses everything. Maggie’s dumbfounded and recounts the damage for Victor. Tate lost his father, Brady lost his son and JJ lost his job. Victor shrugs it off. Maggie wonders when Victor will ever learn…she walks out.

Marlena realizes one key person hasn’t yet responded to her wedding invitation.

Commissioner Brady Stands by and...

Marlena and John Worry When Sami...