Friday July 27, 2018: Eve is horrified to come across Ben Weston, Rafe and Hope learn about Steve's bionic eye working, and Brady and Jenn work together to prove Vic was behind the drug set-up. 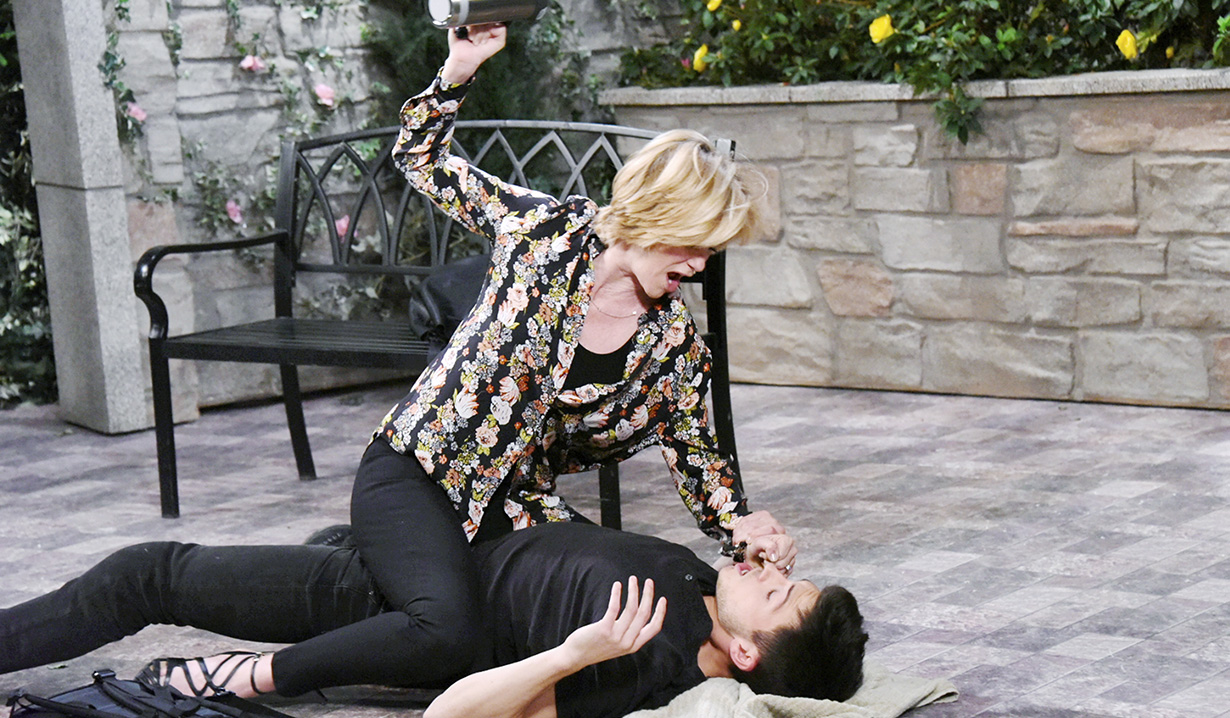 As Steve and Kayla snuggle and kiss in his hospital bed, Rafe and Hope walk in and congratulate Steve on regaining his sight. Kayla’s uncomfortable when Steve tells them how much Kayla had to do with the bionic eye and says she didn’t even have to involve Stefan DiMera. Talk turns to Ben’s case and how Ciara’s paying for his defense lawyer. Steve and Kayla are rocked by the news. At the Kiriakis mansion, Victor pays off his lackie Arturo, (played by Jorge Rodriguez), and asks him to leave town and lie low until this thing with the social worker blows over. The man puts the money away as Maggie appears. She’s introduced and Victor quickly ushers Arturo out, acting odd. Once Arturo’s gone, Maggie asks who Arturo is and if Victor had anything to do with Leo’s disappearance. Victor swears he doesn’t but Maggie knows he’s hiding something. Vic says ‘it’s’ been dealt with but he refuses to discuss ‘it’ further. At Salem Inn, Jennifer tells Brady that Victor paid off the social services worker to stash drugs at JJ’s apartment. Brady’s astounded. If it’s true, he cost Tate his dad and Jenn interjects that he caused JJ his job. Brady will be glad to help her get to the bottom of this. He looks up a list of Victor’s thugs.

Eve finds Ben Weston sleeping on a bench in the park. She gasps and staggers back. Ben looks frightened. Ben has been wanting to talk to her. Eve snidely asks if he wants to shoot the breeze on how he murdered her daughter. Ben doesn’t want to cause trouble. He turns to go but Eve rants. Ben tells her he’s better now. Eve says he owes her a debt. Ben’s sorry. Eve yells at him to tell her how it was possible that he could squeeze the life out of Paige. He can’t. Eve threatens his life if he doesn’t. Ben admits he liked Paige and didn’t want to hurt her. He wishes he could turn back time. Eve snaps that he deserves to die and shoves him to the ground. She gets on top of him and starts strangling him while he gasps, “I’m sorry. I’m sorry.” He’s haunted by what he’s done daily. Eve tries to hit him with her coffee mug when Hope walks up and watches. Moments pass and Hope does nothing. When Rafe appears, he rushes to Eve and drags her off Ben. Eventually, Hope walks over and hugs Eve. Rafe questions Ben who says it was a misunderstanding and he got everything he deserved. Rafe tells him to go and stay away from Eve – and Ciara. Eve screams about Rafe letting him go and Hope talks Eve down, saying killing Ben won’t bring Paige back. Eve takes off crying and Rafe asks Hope why she was just standing there, letting Eve attempt murder. Hope comments that it’s a good thing Rafe got there when he did. She flashed back to seeing Ciara in the fire and starts talking ‘what ifs’. She fears for her daughter because of Ben.

Ciara sees Claire hugging Tripp at the loft and Tripp quickly tells her that his father can see. Ciara’s thrilled. She has to leave for Bella, unless Ciara wants her job back. Ciara thinks Claire deserves it and will do a great job. Claire’s touched. She goes to her room and Tripp brings up Ciara’s closeness with Ben. Ciara’s exasperated that everyone’s asking her about that. Ben saved her. She saw another side of him and wanted to believe that there was some good in him. “Maybe I was wrong,” she muses. Claire listens in from her room as Tripp admits he just wants her to be safe. They hug and admit they missed one another. Tripp leaves and Claire reappears and the girls discuss Ciara pushing Tripp away because of the rape. Ciara forgives them both and they hug and agree to move past their issues.

At the pub, Jenn talks to Kevin on a call, asking if he can look through the photos she emailed him to see if one of them was the man who paid him off. Jenn stares at a photo she sent Kevin as Maggie shows up. Maggie questions why she is looking at Arturo. Jenn can’t say. Kevin calls back…

Tripp arrives at the hospital, happy his father can see him. Kayla leaves them alone and the men discuss Ciara and how Tripp thinks he’s getting a second chance.

Eve turns up at Victor’s and helps herself to a drink. She downs it and he explains Jenn is snooping into who planted the drugs at JJ’s. Eve worries they’ll get caught but Eve assures Vic she can handle Jennifer Horton. “Is that a fact?” Jenn says, startling Eve as she walks in.

Maggie visits Brady. He’s holding up, he tells her. Eve’s helping and he’s video chatting with Tate, which is helpful. Brady lets her know Victor’s up to his old tricks.

Brady’s tempted by the truth.

Steve's Bandages Come Off and a...

Claire Reacts Violently When She...

South Korean Documentaries Finally Get Their Due at Ji.hlava