Steve’s Bandages Come Off and a Miracle Occurs

Thursday July 26, 2018: John and Marlena ask two of their kids to do them a big favor, Steve is shocked when his bandages come off, and Will gets another letter. 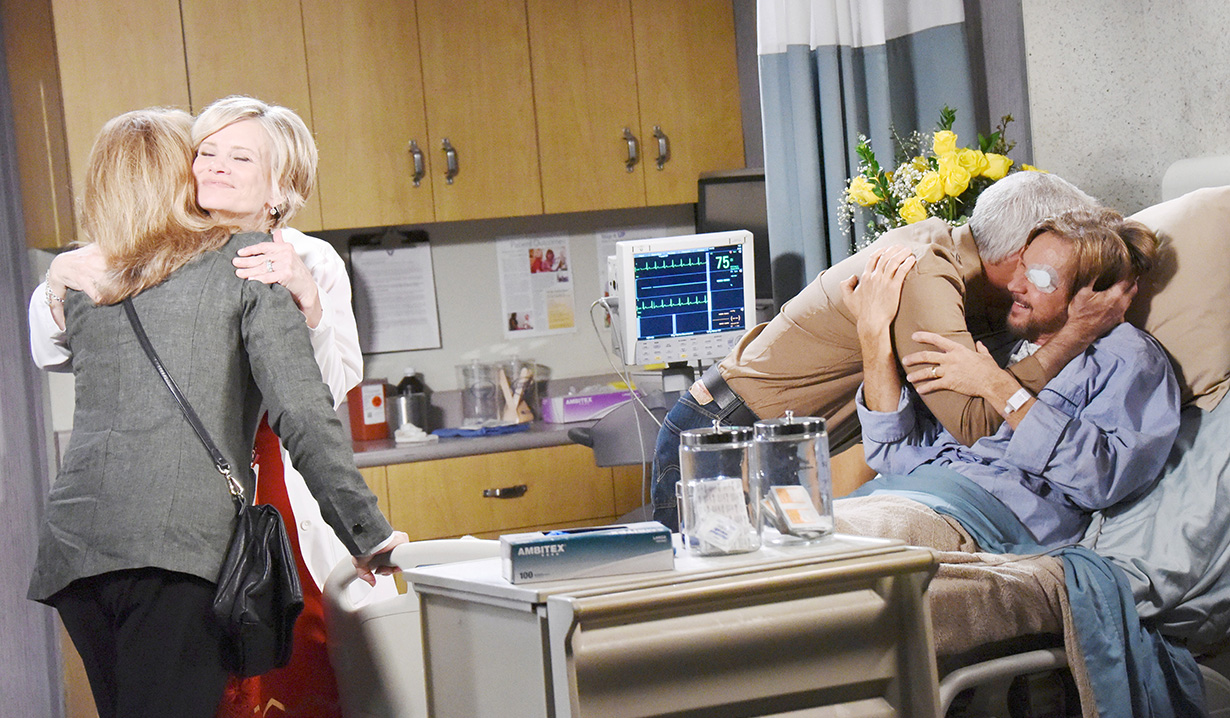 At the Horton square, John and Marlena talk about being on a mission, then part ways.

At the hospital, Steve’s on a call with Tripp, asking him to be optimistic about his eyesight returning. They disconnect and Kayla removes the bandages again and Steve sees nothing. They’re letdown but remind themselves they need to be patient. A few minutes later, Steve says it’s a shame since he wanted to see her reaction to something. “Check the cabinet above the sink,” he says. She finds a bouquet of yellow roses that Tripp helped get. It was 30 years ago that they first married. They reminisce and laugh and Steve starts to laugh uproariously. He tells his wife he loves her in red and she realizes he can see her red dress. They hug and cry together, happily.

At the pub, Jennifer tells Eric that Kevin from Social Services is the one who planted the drugs at JJ’s apartment. Now she needs to find the person who paid Kevin to do it. Marlena interrupts and Jenn goes to check messages while Marlena asks Eric to walk her down the aisle along with Brady when she and John remarry. He’s in. Jenn walks up. Marlena says she’s off to see Steve. Once she’s gone, Eric and Jenn canoodle and he tells her he loves her. She loves him, too.

At Salem Inn, Eve and Brady look at photos of Tate. She tries to cheer him with sex and when it doesn’t work, she suggests he call his son. After the call, Brady tells Eve that Tate’s spending time with Shane while Theresa takes care of her mom. John arrives and Eve toddles off to dress, while Brady gives John tickets to a baseball game. He could take Paul. John’s thrilled but questions why he won’t go with him. Brady’s too upset about Tate being gone. John’s sorry. He tells him that Paul’s going to do a reading at the wedding and he wants his son to walk Doc down the aisle when they remarry. With Eric. Brady’s not sure about that so John works hard and is able to convince him. In her own room, Kate wakes up surprised to find Ted gone.

Ted skulks outside Will’s room at Martin House, before slipping a new letter under his door and taking off, just as Paul and Will are waking up. The men dress and Paul finds the letter. Will rips it from his hand, angrily. When Paul questions him, Will makes something up about it being from a source for his story and asks to be alone so he can finish his story faster. Paul goes and Will opens the new letter which reads, “Does Paul know that you and Sonny are lying to him?”

Ted returns to the Inn and gives Kate lingerie from Barrons and they talk about him being Ben’s lawyer. Later, they have sex and Ted asks Kate out for breakfast. She thinks they should sneak around for a while longer. He asks her not to wait too long.

Sonny and Will meet at the pub to discuss the newest letter. They wonder who sent it and why they’re not attempting to blackmail them. As they talk, Ted walks in. Will hides the letter and Ted says he wants to discuss Leo. Introductions are made and Sonny says the case is closed. Ted questions why Leo would vanish and insinuates that Sonny had something to do with it. Will exclaims that Leo probably got cold feet.

Kate and Paul meet at the square and talk about Will’s newest memories. Paul’s rea ssured to hear that Will is telling others that while he remembers loving Sonny, he still loves Paul. He hopes Paul doesn’t feel that he needs to hide anything. He calls secrets relationship killers.

Steve and Kayla are kissing when John and Marlena walk into the hospital room. They learn that Steve can see and Marlena screams with delight while there are hugs all around. John’s especially relieved and Steve tells him, “It’s all good, partner.” John and Marlena go and Kayla puts Steve’s patch back on.

John and Marlena find Kate at the square. They tell her Steve can see again and she’s semi-glad to hear. Ted walks up to Kate, John and Marlena and asks Kate if they’ve met. She denies it and he introduces himself. Nearby, Eric bumps into Eve and they talk about Jenn being hot on the trail of whoever set JJ up. Eve sighs.

Paul arrives at the pub and sees Sonny with Will.

Jenn rushes to Salem Inn to tell Brady that Kevin from Social Services planted the drugs at JJ’s and was hired by somebody who wanted Brady to get his son back. “Somebody we both know,” she says.

Tripp has a personal question for Ciara.

Chad and Stefan Brawl Over Stefan...

Commissioner Brady Stands by and...