JJ’s Suspended From His EMT Job After His Confession

Tuesday July 17, 2018: Brady says goodbye to his kid, Theresa gets a room at the pub, and Jennifer questions JJ about the drugs. 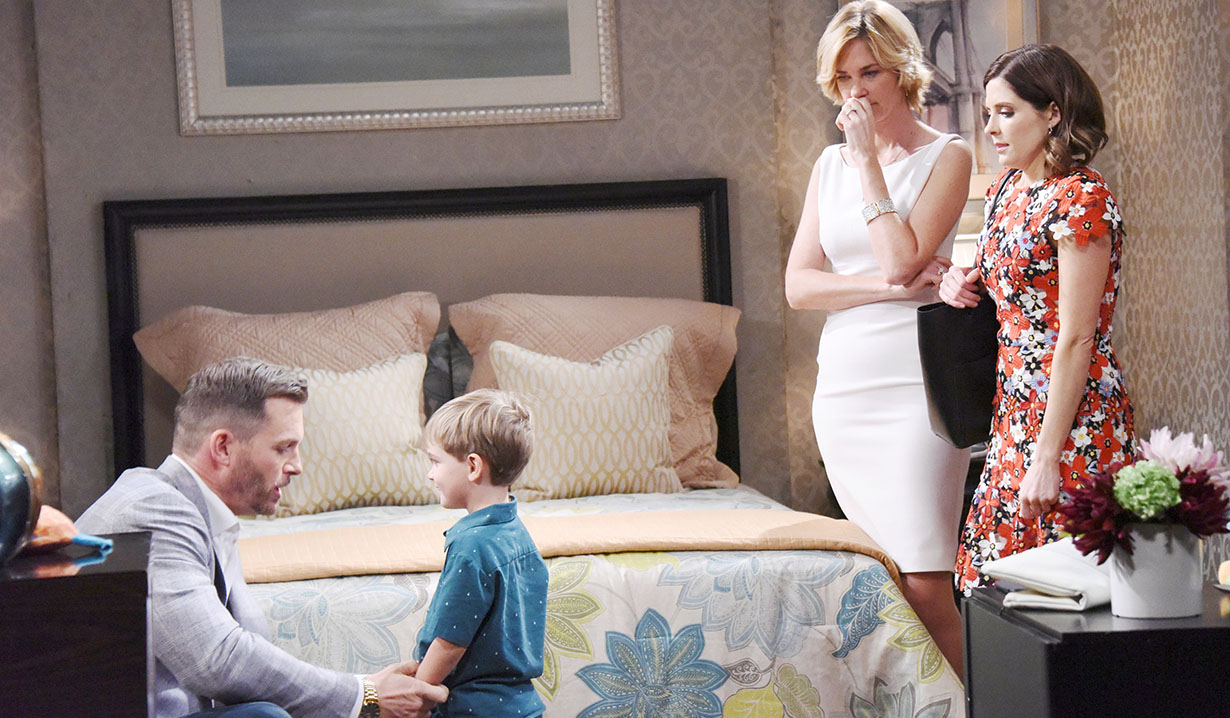 At the pub, Jennifer takes a call about the scoop at the courthouse. She learns something shocking and disconnects as Roman walks up. She relays that JJ confessed to having drugs at his place. She doesn’t get it but has a bad feeling about the company he’s been keeping in Theresa.

JJ and Theresa arrive home. Theresa’s feeling conflicted about winning sole custody of Tate. It’s not the way she wanted things to go down. JJ admits Brady doesn’t seem like the type to plant drugs though Theresa wonders if Victor’s merely rubbing off on him. Theresa finishes packing and will miss living there. He asks what part. The square footage, the lukewarm showers or the couple upstairs reenacting Fifty Shades of Grey? She laughs, then they reminisce and say goodbye. Once Theresa’s gone, Jennifer arrives. She heard the news. JJ tells her that Brady framed them. Jenn believes the drugs weren’t JJ’s but doesn’t think Brady would do that. JJ’s boss calls. He’s been suspended. Jennifer vows that Brady won’t get away with this.

More: Is Christie Clark done with Days for good?

From Salem Inn, Brady talks to Justin on a call, devastated that he has to comply with the law and hand his son over to Theresa. Eve walks in after taking Tate to his favorite donut shop. Brady wonders how this happened, how he lost Tate. Eve blames herself. None of this would have happened if he would have chosen Theresa. Brady’s glad he chose her. Eve has a plan to fix everything. Brady suggests they go on the run but Eve’s having none of that. The court would see it as kidnapping. Kathy Sullivan from Child Services arrives. She’s there to facilitate an easy transition for Tate. In the park, Gabi remembers changing the paternity results to show Stefan as the father of Abigail’s baby. Gabi thinks “Karma is a bitch. Since you and Stefan ruined my life…” she begins, cut off by the appearance of Stefan. He wants to talk business but she’s disinterested. She wants to talk about him. She asks if when he framed her for murder, did he think that he’d ruin her life in more than one way? She tells him about her surgery in prison giving her an infection and that she can’t have kids. All because of him. Gabi believes in revenge and that people like him deserve to be punished. She wants to see him suffer like she has. He tells her he’s been suffering. He wants Gabi to eventually trust him so they can get past what’s happened and work together. Gabi rolls her eyes. Once he’s gone, she says she won’t get over it. “You and your little whore, Gabby, took something from me that’s precious. Now it’s my turn to take something from you.” She grins that all hell will break loose.

More: Test how well you know Days of our Lives

From her room, Abigail flashes to Gabigail in bed with Stefan and hides the paternity results in her purse. Chad sneaks up behind her and she yelps. He’s sorry. She’s sorry, she just got bad news. She heard Gabi can’t have kids. Chad stammers that he heard too. Abby blames herself. Chad claims Gabi doesn’t blame her. Chad stammers some more and says Stefan can’t hurt them anymore. Abigail looks away. She flashes to Gabi telling her to lie to Chad about being the baby daddy. She takes a call and learns about JJ coming forward with having drugs in his apartment. Chad knows JJ’s been through so much – enough to break anyone. They smooch, give a high five and Chad goes to read to Thomas while Abby calls Gabi to tell her she has made a decision.

Theresa arrives at the pub with her suitcase. Roman notes that Theresa’s not happy. She says she’s happy Tate’s with her now but isn’t thrilled with how it happened. She wanted to work things out with Brady. She confesses that Brady tried to make her look like a bad mother. Roman guesses that it has something to do with the drugs in JJ’s apartment. Theresa says Brady set them up. Roman calls JJ “a very, very good friend.” Theresa asks if she can stay there. She can. He warns he’ll put Tate to work bussing tables, which makes Theresa laugh. He asks how it was living with JJ and learns she loved it. She regales him with the funny story about the upstairs neighbors’ sex life.

Theresa stops by Salem Inn with Tate. Brady hugs his son and tells him that he’s going to go live with Mommy for a while. Tate nods. Theresa looks on, sadly. Tate asks if his daddy’s coming too and Brady tears up and says no, but he’ll miss him. Theresa apologizes and goes.