Monday July 16, 2018: Gabi tries to talk Abby into keeping her baby, JJ lies for Theresa but Justin doubts he's back on drugs, and Steve and Kayla get excited about the possibility that Steve will get a bionic eye. 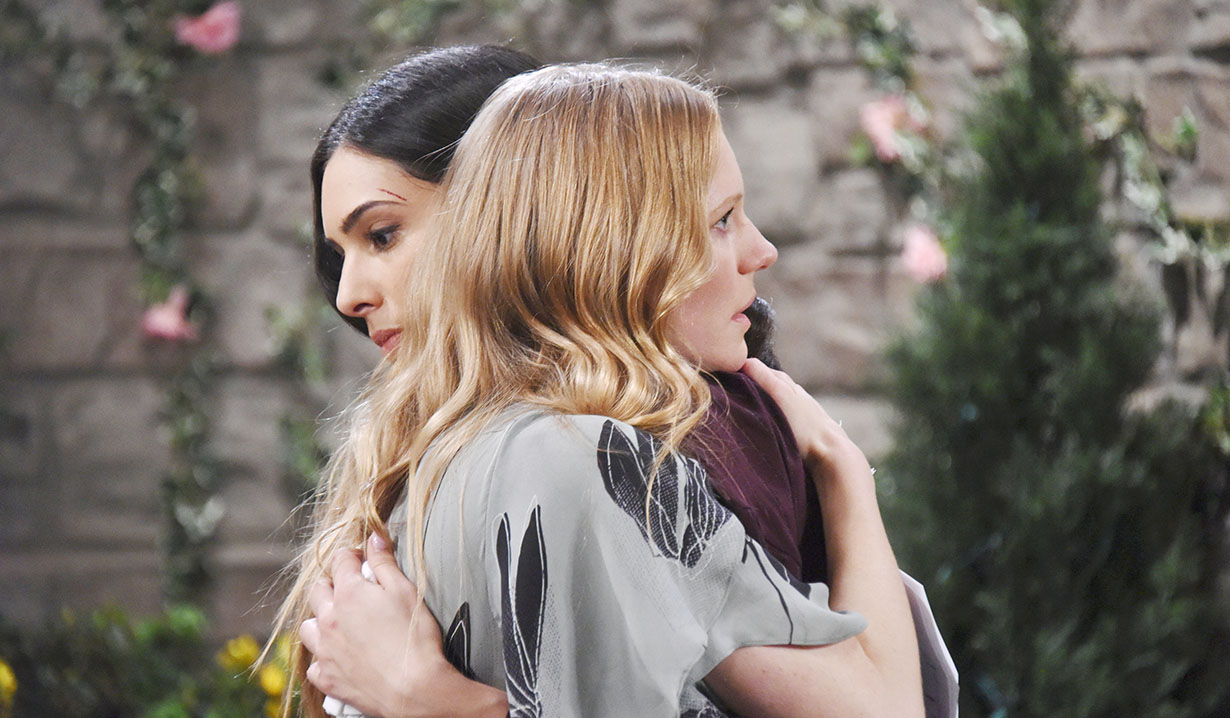 In court, JJ tells the judge that the drugs found in his apartment are his. Justin thought JJ was done with drugs years ago. JJ says that’s true but he’s had personal issues as of late. He’s sorry for dragging Theresa into this mess. Brady suggests JJ’s covering for Theresa. JJ denies it. The judge will take it into consideration. They adjourn and Theresa looks at JJ, teary-eyed. She takes him outside and JJ admits he couldn’t let her take the fall. She’s worried he’ll lose his job. She didn’t know Brady would stoop this low. Inside, Brady wonders if Jennifer knows JJ is using again. Justin’s gut tells him JJ’s lying but Brady doesn’t think Theresa’s shock was an act. Eve agrees looks guilty. Once Brady and Theresa are alone, Theresa snipes that JJ lied. They know Brady set her up. In another room, Justin says Eve and Vic ruined everything. Court is back in session and Theresa tells the judge that she’s running Bella Magazine and can afford her own place – not a hotel room, and she’s learned from past mistakes. She’ll be a good mom. Brady clarifies he didn’t murder Deimos, he sober and he’ll be married soon with a house of his own. He talks about being in Tate’s life during daily rituals such as looking for monsters under the bed and gets emotional. The judge talks about both having their own share of problems. She has chosen to give sole custody to Theresa, as long as she stays away from JJ. Brady’s eyes widen. He’s heartbroken.

More: Does Ben Weston have Schizophrenia?

At Mandalay, Steve and Kayla dine as they look forward to his new “shiny bionic eye.” They kiss. He thanks her for making this happen, glad they didn’t have to resort to asking Stefan DiMera for help. Kayla admits her hopes are up as well. They kiss and drink champagne.

Kate and Stefan try to keep quiet while Chad bangs on her door at Salem Inn. When he won’t leave, Stefan gets the door and Kate lies that Stefan has been begging her to return to DiMera. Chad licks his lips and eyes Kate. He finds that hard to believe. Stefan says it’s true. Chad mutters, “After she shot your mother in cold blood?” Chad smirks and Stefan goes, since Kate turned him down. Chad asks Kate to work with her at Titan but she doesn’t think Victor would go for it. Chad needs her. She finally tells him to ask Victor. Talk turns to Leo. They assume he took off scared and are glad. Chad goes.

At the park, Abigail reads the paternity results. Stefan’s the father of her baby. She panics and Gabi claims to be sorry. “Sometimes it’s not so easy to move on and act like the past didn’t happen,” she declares. Abigail’s confused as to what she means. She repeats herself though she appears to be talking about herself. Gabi asks if she’ll have the baby. Abby doesn’t think anyone would blame her if she aborted. Gabi admits she too thought of it when she was pregnant with Ari but she’s glad she didn’t. Abs reminds her that her circumstances weren’t the same. Gabi tries to convince her to have the baby, then confesses she may never have kids because of an infection due to the surgery she had in prison. Abigail’s floored. She hugs her friend who blames herself. Gabi assures it’s not her fault but Abigail remembers Gabigail’s memories and feels shame. Abs isn’t sure how to tell Chad or if their marriage could survive this. Gabi tells her to change the paternity results. Nobody will have to know. Abigail ponders this but doesn’t want to lie to Chad. Gabs knows Chad wants another baby. Abby needs time to think and thanks Gabi for listening. “I want you to have everything you deserve,” Gabi says. Back at Mandalay, Steve and Kayla toast to honesty no matter how difficult. Stefan walks up and asks what they’re celebrating. Steve barks that it’s none of his business and Stefan alludes to Steve needing to thank him for his bionic eye. Steve snipes that the only person he should thank is his wife, then he strikes out verbally, saying that Stefan doesn’t know what love is about. Stefan thinks he does, causing Steve to jump up and defend Abigail’s honor, stating that Stefan raped her. Kayla leads Steve away and Stefan receives a call from Kate who says Chad’s going to ask if she can work for Titan. They argue about whether she should take the job and Stefan gives her a warning before disconnecting, when Chad appears. The men snark at each other until Abigail appears. Meanwhile, nearby, Gabi sits on a bench and flashes to looking at the paternity results and saying,  “Of course Chad’s the father. You get away with everything, don’t you, Abigail. Maybe not this time.”

In Kayla’s office, Steve and Kay wait for the engineer to arrive. Steve’s sorry he exploded at Stefan.

Brady must say goodbye to Tate.

JJ Lies to the Judge That the...

JJ's Suspended From His EMT Job...