Friday July 13, 2018: Gabi fills Chad in on her medical issues, Abigail gets paternity results back, and Theresa thinks Brady set her up. 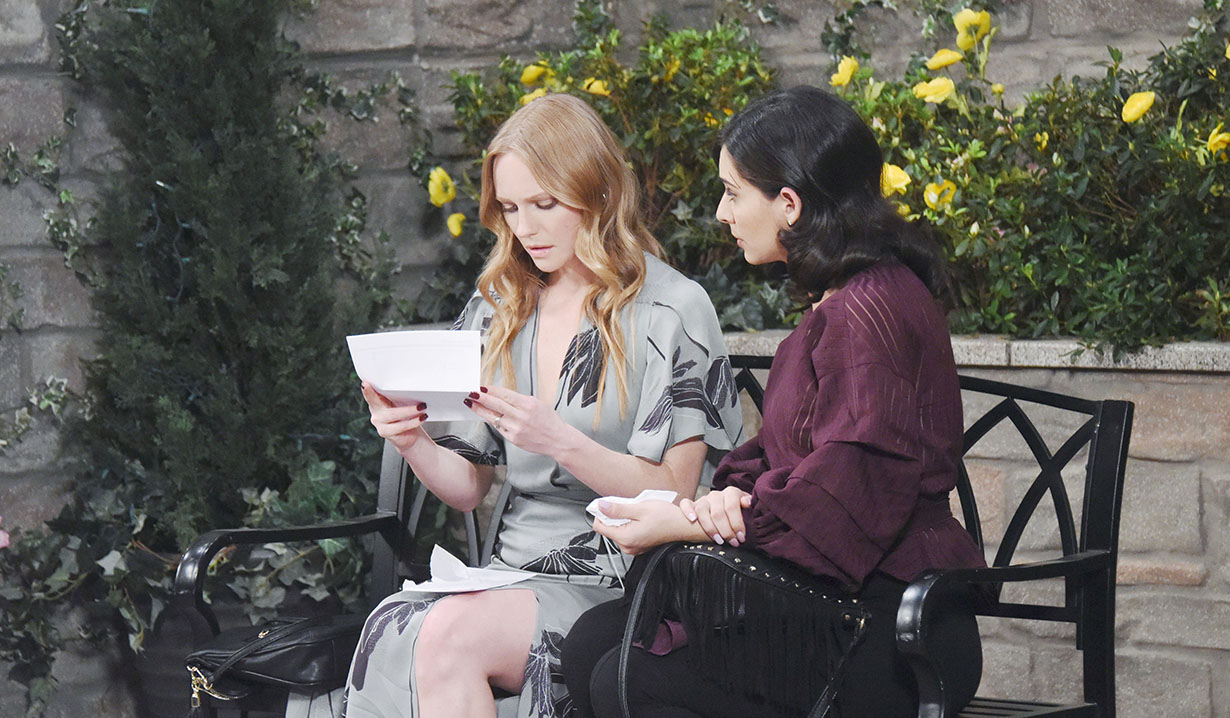 Once the social worker has left JJ’s, Theresa screams that she’ll lose her case. Why didn’t JJ tell her he was using again? JJ says the drugs weren’t his. Theresa considers that and it dawns on her that she was set up by Brady. JJ’s confused. He never saw Brady go anywhere near the kitchen. Theresa panics and feels stupid. She’s sure she’ll lose Tate.

on a call with Victor, asking him to ‘undo’ it. Brady makes himself known and Eve covers and claims she needs to head into work to fix someone’s mistake. They kiss. Justin calls. They’re reconvening this afternoon in court. The men are positive that things will go their way.

In the square, Chad talks to someone on a call about Titan when he sees Gabi almost in tears. He questions her. She fills him in on her infection and scar tissue in her uterus, caused by the prison surgery. She Googled it and doesn’t think she’ll bear more children. Chad’s sorry. He suggests a specialist but for now, she doesn’t want false hope. She’ll focus on the child she has now. Gabi lets him know how much Ari hates her. Chad is sure Ari just needs time. Gabi is having a hard time with her anger toward Stefan and Abigail for putting her in prison, even though she knows Abby was sick. Chad asks her to reconsider working for Stefan but she won’t. Chad thinks she deserves happiness. Gabi asks if he’s still happy. He is. Gabi calls it a miracle that Abby recovered so quickly. Chad says she’s still going through therapy. Chad offers to talk to Ari.

At the DiMera mansion, a drunken Stefan reads about Chad being CEO in the paper. He’s pissed upon reading a quote about DiMera Industries stock taking a nosedive and smashes his glass in the fireplace. He sees a vision of Gabigail telling him to take it easy. He tries to touch her but she reveals, “I’m just a drunken hallucination.” She says she’s gone. There’s not even a tiny piece left inside of Abigail.

In bed after sex with Ted, Kate talks about her ‘mostly’ platonic marriage with Andre. They make out again until his secretary messages him that he’s due in court. He rushes off, then Stefan arrives. “It’s time for you to pay the piper,” he declares. They rehash their old argument about whether or not Kate murdered Vivian. Stefan blackmails her with photos of her and Leo. He wants her help in destroying Titan – and Chad. Kate suggests he leave Salem. Chad arrives.

Abigail arrives at Kayla’s office looking for the paternity results. Kayla hasn’t looked at them yet. She explains the drama surrounding Ciara checking herself out of the hospital. Abigail had no idea she was found, and looks aghast when she learns Ciara was with Ben Weston. They discuss her past with Ben and her regrets of having sex with Stefan. Kayla hands over the results. She saw Gabi earlier and she mentioned Abby confiding in her. Abby says Gabi found out by accident but she’s been supportive. Kayla says she and Steve are there for her no matter what.

Back at JJ’s, Theresa receives a call from Ted’s office. She has to return to court. She assumes it’s over but refuses to give up on her son.

In court, Eve privately tells Justin that she teamed up with Victor to try to do something to ensure Brady gets custody of Tate. But when Theresa came to them to agree to shared custody, she asked Victor to call off his dogs. It was too late. Eve doesn’t know what to do. Court is in session when the judge tells everyone that a bag of cocaine was found at JJ’s apartment that he shares with Theresa. Brady’s flabbergasted. Theresa explains that Brady dropped by this morning and must have planted the drugs then. Brady swears on his son’s life that it’s not true. They squabble. Things get heated and the judge suspends Theresa’s rights to see her kid so JJ jumps up and claims the drugs were his.

Abby comes across a weepy Gabi. Gabi asks if she received the paternity test results. She has so Gabi encourages her to open them. When she does, she looks shell shocked.

Abby knows who her baby daddy is.

Chad Stuns Abigail by Stating He...