Gabi Is Rushed to the Hospital With Severe Pain

Wednesday July 11, 2018: Sonny wants Will to tell Paul the truth, Hope yells at Ben for setting the fire, and Kate gets some lovin'. 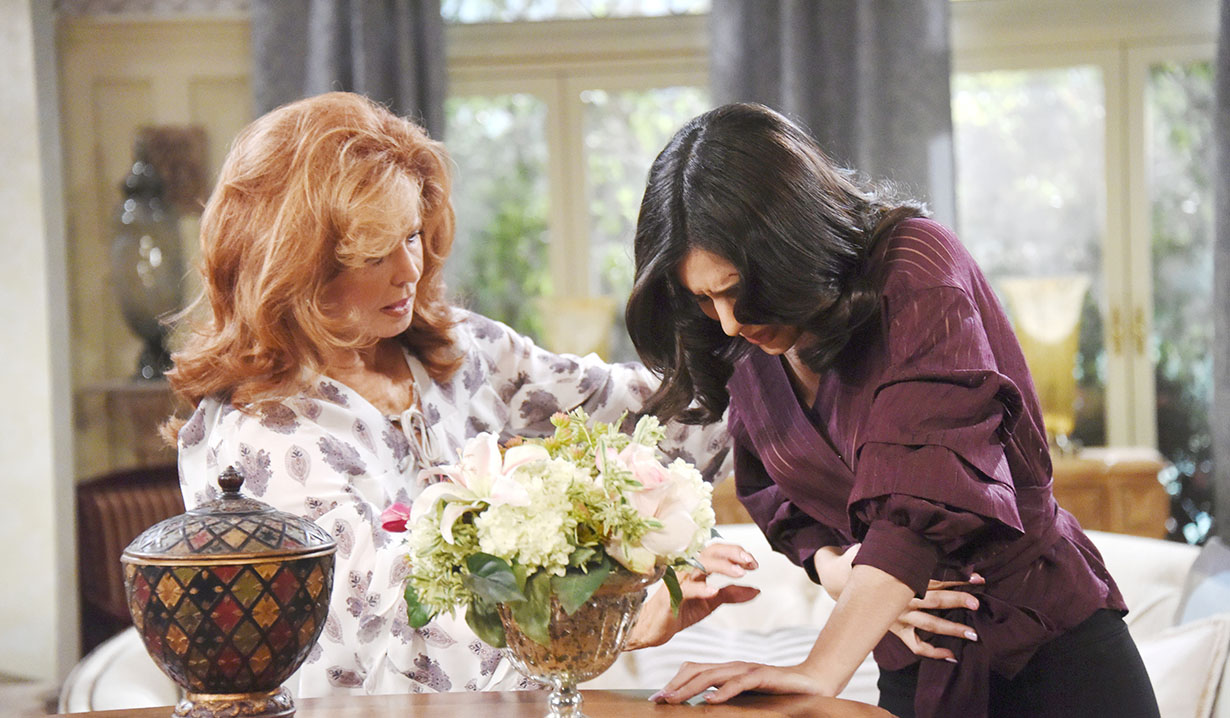 Gabi arrives at the Kiriakis mansion to see Arianna.

Gabi and Maggie discuss Ari spilling juice on the rug. Gabi finds it excessive that Will sent it for cleaning. Maggie goes to get Ari and when she meets her mama, she’s still angry with her. Gabi says she too hated being away from her. “You’re what kept me going,” she states. She wants to start over and gives her a doll. Ari tosses it across the room. Maggie mediates. The juice spill comes up and Ari insists she didn’t spill juice. She remarks that her dad is lying. Gabi says accidents happen but it’s not nice to lie. Ari snipes that her mama lied to her, then runs off. Gabi groans. She’s failing as a mother. Maggie says all moms feel that way sometimes. As they talk, Gabi gets a pain. She’s been having them for a while. Maggie frets and begs her to see a doctor. When Gabi has another pain, Maggie rushes her to the ER.

More: Big name celebs who got their start in soaps

At the Martin House, Sonny and Will rehash not knowing where Leo or his car are. No impound within a 50 mile radius has it. Maybe somebody hot-wired it. They ruminate and Sonny’s sorry for dragging Will into this.

Marlena and Hope walk into Ciara’s empty room at the hospital. Marlena reads the chart and assumes Ciara’s at her MRI appointment. Hope brings up Ben. She knows he hasn’t changed. Marlena disagrees but Hope claims Ciara has Stockholm Syndrome. Marlena considers that as an option but what if Ben really did help Ciara? Hope furrows her brow and when the nurse comes to retrieve Ciara for the MRI, Hope realizes she’s gone and runs off.

At SPD, Ben is shocked to see Ciara visiting.

She snuck out to see him to ask if he set the fire. He swears he didn’t and is glad that her mom and Rafe rescued her. Ben thought she had perished and was frightened because he cares about her. She asks if he could have set the fire and not remembered. He shakes his head. He took his meds on the way back to the cabin. The voices and hallucinations were gone. She reminds him he tried to torch Abigail and Chad. Ben yells that she has every reason not to trust him since he’s a serial killer. “No matter what I do, I’ll always be the Necktie Killer.” Ben is haunted by what he has done. He’s forever sorry for what he did to those he killed and to their loved ones who will miss them forever. Ciara cries. Ben can’t change it. He thought she started to trust him. Hope rushes in, relieved to see her kid in one piece. Hope badgers Ben, telling him to admit he tried to kill Ciara.

More: Does Abigail have feelings for Stefan?

At Mandalay, Paul tells his dad that the last time he saw Sonny at the Kiriakis manse, he seemed agitated, as though something was going on. He mentions Will telling Sonny about his memories returning. John’s glad to hear things are still good between them. Paul goes and Marlena turns up to tell John about Ciara going missing from the hospital. John makes a call and learns she’s at SPD.

In Kate’s room at Salem Inn, she and Ted wonder where Leo could be. Kate worries he’ll spill everything and hurt Chad and ruin her last good hope in getting DiMera back. She whines that the world is full of backstabbers and liars and takes out her gun. She muses that everything has gone to hell since she shot Vivian. Ted rips it from her hands and tosses it aside. She can’t fall apart. He wants to help her. She tears up and he pulls her into a kiss. She tells him to take off his shirt and as he does, they kiss and head to bed.

Paul walks in on Sonny and Will at Martin House, looking serious and sitting on Will’s bed. Paul asks what’s going on. They lie that they’re talking about Leo being a no-show in court. Paul offers to track him down. Sonny asks him not to. Will claims he has to interview Sonny so Paul leaves. Sonny thinks Will should tell him but Will doesn’t want Paul to become an accessory to the crime.

Kayla has really bad news for one Salemite.

Rafe and Hope Assume Ciara Has...

Chad Stuns Abigail by Stating He...