Tuesday July 10, 2018: Hope and Ciara argue about Ben, Rafe refuses Ben his medication, and JJ tries to get Theresa to consider her real reasons for the custody case. 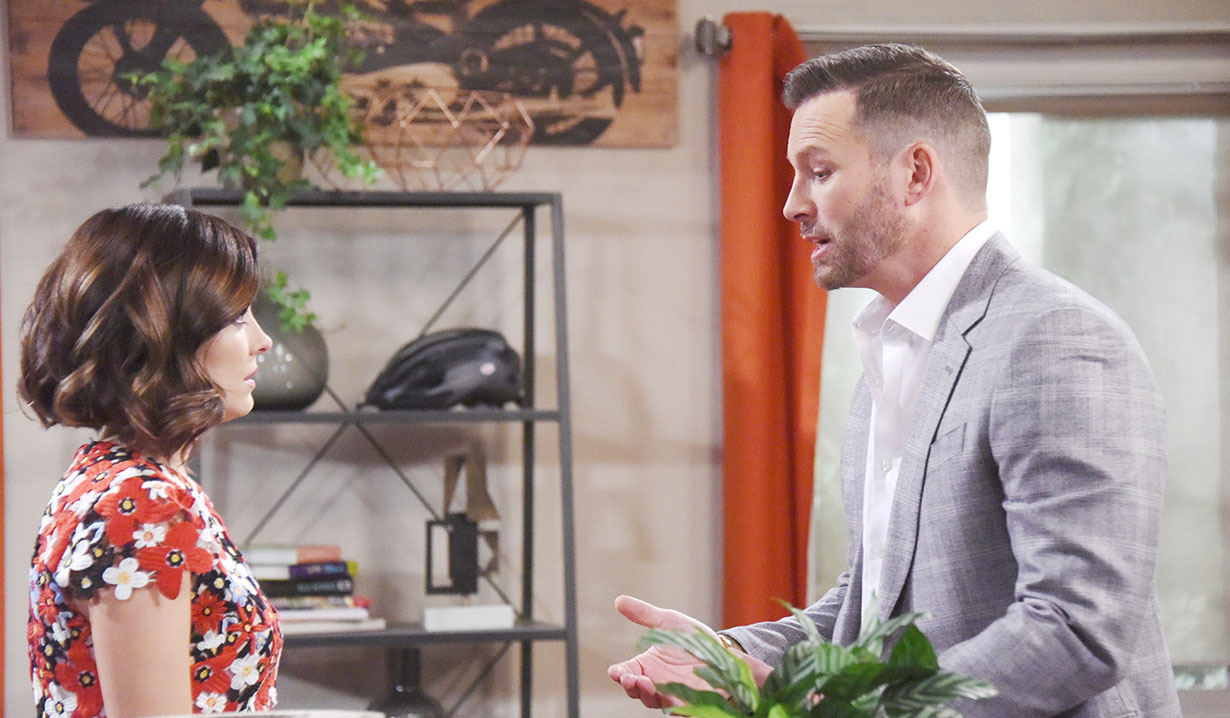 At JJ’s place, Theresa is making cookies for Brady. JJ asks why the heck she’d be baking for him. She hoped they’d help Brady to stop hating her. They rehash her reasons for dragging Brady into a custody case and JJ thinks she knows this case isn’t going to work well for anyone. Theresa snipes that it’d be easier if he wasn’t bedding her sister. JJ wonders again if Theresa’s just punishing Brady. Theresa agrees. Maybe that’s how screwed up she is. JJ calls her amazing for getting out of the bed daily after her ordeal in Mexico. She shouldn’t have to think about anything but healing, but she’s a mom and has to do what’s best for Tate and put her feelings on hold.

More: Huge list of famous actors who started in soaps

Brady and Eve wake up at Salem Inn. Brady ruminates over the custody trial. Eve thinks he should stop protecting Nicole or he’ll lose custody of his son. Brady again won’t. He goes to shower and Eve calls Victor.

From the loft, Claire is relieved after Julie calls to tell her Ciara’s been rescued. Claire yells the news to Tripp and they happily embrace. Tripp refuses to let Claire go with him to the hospital, worried about how it’ll look.

In the hospital, Ciara sleeps while Hope takes a call from Rafe. Hope says her kid is okay. In fact, whoever splinted her leg, did a good job. Ciara wakes up and assures her mom she’s fine and stuns Hope, saying that Ben saved her. Hope doesn’t believe he’s changed. Ciara’s shocked to learn that the cabin was the same one Ben set fire to with Chad and Abigail inside. Hope asserts that Ben set this fire, too. Ciara denies it. Ben was far away from the cabin when it broke out. They argue and then Ciara flashes to Ben yelling at her. Tripp arrives and Hope gives them a minute. Tripp worries that Ben hurt her. Ciara barks that she won’t tolerate Ben bashing. He saved her. Tripp laughs, confused. He wants to make things right. Ciara kicks him out.

At SPD, Rafe goes to Ben, calling him stupid when he says he saved Ciara, and didn’t hurt her. Rafe accuses him of doing the same thing to her as he did to Abigail but Ben promises that he didn’t. He was out getting his medication. He asks for the meds. He needs to stay on a schedule but Rafe remarks that he’ll get them when he’s done. He starts yelling at Ben about being a serial killer. Rafe won’t let him harm anyone again.

Brady arrives at JJ’s to discuss the custody case. He and Theresa rehash her ordeal and the case so far until JJ steps in to let Brady tell her why he’s there. He reminds her they swore they’d put Tate’s needs before their own. Theresa starts bashing Eve until JJ mediates. Theresa gets the cookies. He hopes they’re a peace offering. She insists they’re for Tate but cries, remembering when they were happy.

Eve arrives at the Kiriakis mansion. Victor’s drinking already. He says he has to fortify himself to deal with her. He starts spewing Greek mythology and Eve waves her hand, asking him to shut it. Brady’s about to lose custody of Tate unless Vic helps. She reveals she knows Nicole killed Deimos but he won’t tell the court. Victor shrugs. It’s not his problem. Eve calls him her last link to Isabella. How does he think she’d feel if he did nothing to help her kid? Vic calls her one step below her sister. How does she think Isabella would feel knowing Brady took up with her? Eve rolls her eyes and plods on. They need to get the proof that Nic killed Deimos and get it to the judge. She heard there was a recording. Victor goes to get it in the safe but it’s gone. Eve throws a fit.

Back at SPD, Rafe fills Hope in on Ben’s statement and Hope tells him about her talk with Ciara. They assume she has Stockholm Syndrome. Hope goes to Ben. She too won’t give him his meds but assures that they’ll prove he set that fire. Ben declares they’re wrong about him. Ciara knows it. Finally, Rafe gives Ben his meds.

Tripp returns to the loft and Claire learns Ciara’s okay. He tells her how Ciara defended Ben.

Hope returns to the hospital and Ciara’s gone.

Back at SPD, Ciara visits Ben in the interrogation room. He looks relieved to see her.

Desperation sets in when Will and Sonny still can’t find Leo.

One couple gets lusty.

Brady Shocks Eve With the Reveal...

Gabi Is Rushed to the Hospital With...