Brady Shocks Eve With the Reveal That Nicole Murdered Deimos

Monday July 9, 2018:  Sonny is torn with wanting to tell his father the truth about Leo and keeping it secret, Will lies to Paul, and Brady tells Eve the truth about Deimos' murder. 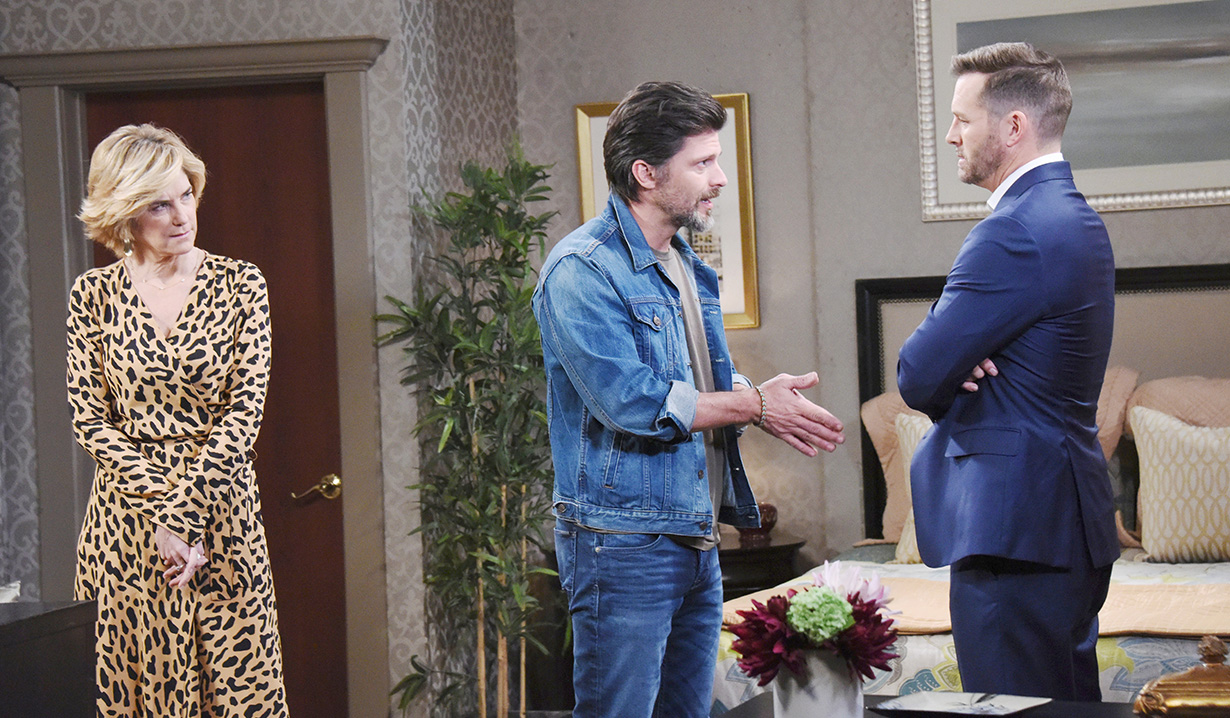 At Salem Inn, Eve asks Brady who killed Deimos. Brady says he’ll confess all. He starts by admitting he found the cursed amulet in Eric’s room. Just then, Eric arrives. Brady wants Eve to keep this to herself and they let Eric in. He wants to mediate about the court case. They assume this means that he’s siding with Theresa. They talk over one another about the nasty way Theresa’s lawyer Ted has treated key witnesses in the case, even bringing up the cursed amulet. Eve blurts that she knows for a fact that Brady didn’t kill Deimos. Brady tells Eric that they’re exhausted so he takes off and Brady relays that Nicole murdered Deimos. He provides all the details and Eve thinks they should tell all. Brady doesn’t want to. He treated Nicole like garbage when he was bitter about her dumping him but he can’t turn her in now. He’s happy. He can’t let Holly have nobody. Eve worries that if it’s not her, Brady will be jailed for the crime. Brady argues that Nicole wanted kids her whole life and Holly was her miracle.

From the Martin House, Will flashes to talking about covering up Leo’s death.

Paul arrives. He wonders what happened when Will went to see Sonny, earlier. Will’s confused. Paul hoped that the information he learned about Leo being a prostitute would help Sonny’s case. Will says he’s giving it to his dad. Paul asks if they discussed Will’s memories. Will says they did and repeats what he has said in the past about loving Paul. They kiss and Paul feels relieved. Will looks up and around the room and Paul laughs. Does he have somewhere else to be? Will claims he has work to do. Paul’s disappointed. He leaves and Will sneaks out.

From SPD, Hope and Rafe notice that Ciara had her phone on. They’re able to track her location to the cabin in the woods. Hope realizes it’s the same one where Ben held Abigail.

At the cabin, Ciara wakes up and cries out when she sees fire all around her. She starts coughing and suddenly, Rafe and Hope appear outside. They call Ciara’s name and rush inside to rescue her. They find her passed out on the floor and between the two, they get her to safety outside.

Jenn arrives at the pub, back from a conference. She and Roman hug. They catch up and Roman tells her how the Fourth of July barbecue was a dud. Jenn’s surprised. Roman tells her it’s because Ciara’s gone missing and they believe Ben Weston has her. They worry and talk about the kids. Jenn says

Abby’s back to normal and JJ’s enjoying his job as an EMT. They discuss Eric and how close he and Jenn have become and then they recall the last time they saw Nicole. Eric strolls in and gives Jenn a peck on the lips while Roman goes to get them some grub. Once he’s gone, Eric and Jenn make out. They discuss Ciara being missing and then talk about Brady and Theresa’s court case. Jenn hopes that soon, he and Brady can be brothers again. In walks Paul, who sidles up to the bar for a beer. Roman chats him up about Will working tonight.

At the Kiriakis mansion, Sonny thinks back to Leo’s death cover-up when Justin asks where the carpet went. Sonny tells the lie that Ari spilled grape juice on it and then they talk about Sonny’s upcoming court case. “We’ve got to bury the guy,” Justin exclaims. Sonny winces and agrees and then tells his dad about meeting with Leo – but he leaves out the fight and Leo’s death. Sonny hands over documentation that shows that Leo’s real name is Matthew and that he was a “hooker.” Sonny snipes, “I sure can pick ’em.” Justin takes the document. He’ll

Will meets Sonny at the park. Sonny has a bag full of cloths to remove their fingerprints once they get Leo out of the trunk of his car and set the accident up. They run away and then return a moment later. They couldn’t find Leo’s car. What do they do?

Rafe calls for an EMT as Hope does CPR, then Rafe reports the fire. Ciara comes around and then Ben rushes up, yelling Ciara’s name. Rafe pulls a gun on him and asks if they screwed up Ben’s plan. Ben’s confused. Rafe jumps him and holds him down as Ben repeats, “I’m sorry. I’m sorry. I’m sorry.”

Rafe and Hope Assume Ciara Has...