Ben’s Intense Hallucinations Cause Ciara to Reach for Her Knife

Thursday July 5, 2018: Ben starts to unravel, Chloe testifies but her testimony backfires, and Rafe and Hope work hard to find Ciara and Ben. 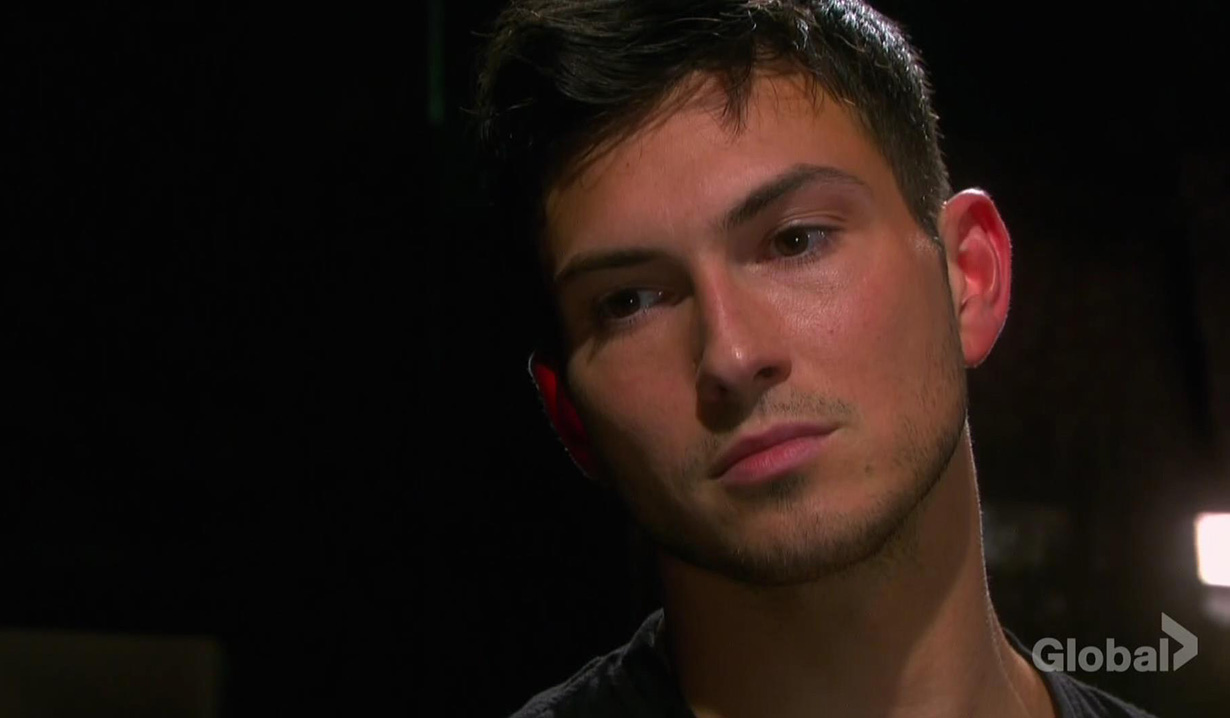 Chloe walks into the courtroom as Brady’s surprise witness to Theresa’s character in the custody case. Chloe takes the stand Justin questions her about being kidnapped and held by El Fideo. Chloe talks about Theresa leaving her behind and then tipping off Mateo when she learned John and Paul were planning a rescue. Ted cross examines Chloe and asks why she’d believe Theresa was responsible for her welfare. Chloe calls it basic human decency. Ted establishes that Chloe was once married to Brady and that she already lied in a child custody case with Nicole Walker. After Justin cross examines her, she finishes up by saying she doesn’t think Theresa deserves full custody. She goes and during a break, Eve eavesdrops on Theresa telling Ted that she doesn’t want shared custody because when her parents did it, it was a nightmare. Ted nods. He has something else up his sleeve. Outside the courtroom, Justin lets Brady know he has one more witness to call. Tate. Brady refuses to allow it. They head back inside and Ted calls Eve to the stand. He calls Brady’s love life complicated. “Even as a French man, Mr. Brady Black’s affairs are giving me vertigo.” He dredges up the past, reminding Eve of having sex with her teenage daughter’s boyfriend, to discredit her. Ted brings up that time when Brady planted the cursed amulet her purse, and trashes Brady, while shocking even Theresa. Ted asks where she thinks Brady got the amulet from. Eve asks why it even matters in a custody case. Ted reminds her she once thought Brady killed her ex-lover, Deimos Kiriakis, and uses her own police statement against her.

From SPD, Hope makes a call to a pharmacy to see if Ben Weston dropped in to buy his medication. He hasn’t so she disconnects. Eric strolls in with food from Roman. They discuss Ciara’s case and Hope’s new assumption that she’s with Ben Weston. Eric can see she’s upset and reminds her that Marlena says Ben was doing really well on his meds. Hope worries that he’s off his meds since he hasn’t refilled his prescription. At the loft, Rafe questions Tripp and Claire about what they heard in the background when Ciara called. They can’t remember anything. Rafe lets them know that they’ve reason to believe Ciara’s with Ben Weston. He goes and Claire starts yelling and hyperventilating, thinking the worst has happened.

Ben runs into the cabin. Pissed, he tells Ciara he went to the pharmacy to buy his prescription but the police have surrounded the place. He turns on Ciara and blames her, assuming her mother put out an APB on him. Ciara didn’t say anything about Ben. She wouldn’t do anything to get him into trouble. Ben apologizes. He’s on edge. He needs his meds. Ciara offers to call and tell her mother she’s not in danger. Ben prohibits it. He can’t go back to the sanitarium. Ciara vows that he won’t. She urges him to check in with his doctor but he won’t and suddenly decides he’s fine and doesn’t need his medication. He becomes more unhinged and stomps on her phone in anger, begging Ciara to let him think. He yells that he had no choice but to handcuff her to the bed. Ciara is puzzled since she’s not cuffed to the bed. Ben flashes to thinking he has and confuses his demons with reality. His hallucinations terrify him. Ciara tries to tell him she’s on his side but he calls her a “lying little whore, just like the rest of them.” Ciara grabs her knife. Ben assumes she thinks he’s a killer since everyone else does.

More: Flashback to the 4th of July celebrations in soaps Eric arrives at Doug’s Place for food for the Fourth of July party. He notices Chloe’s upset and she reveals what happened at the custody hearing with Ted dragging her name through the mud. Chloe’s glad Eric talked her into doing the right thing before Nicole left town. Eric asks if Chloe has heard from Nic. She hasn’t and is surprised. Eric still thinks his brother put Nicole up to leaving him.

Rafe returns to SPD. Hope starts blaming herself for not being there for Ciara until Rafe stops her. Ciara loves her. “I love you,” he says. He promises they’ll find Ciara. They embrace. Hope gets a call from Ben’s doctor who says Ben hasn’t checked in yet.

Brady’s put in the hot seat.