Ciara Tells Tripp She Was Raped and Later Crashes Her Bike

Tuesday June 5, 2018: Justin and Sonny meet with Leo and his lawyer, Brady confronts Victor over his lies, JJ makes Theresa an offer, and Ciara lashes out at Claire and Tripp. 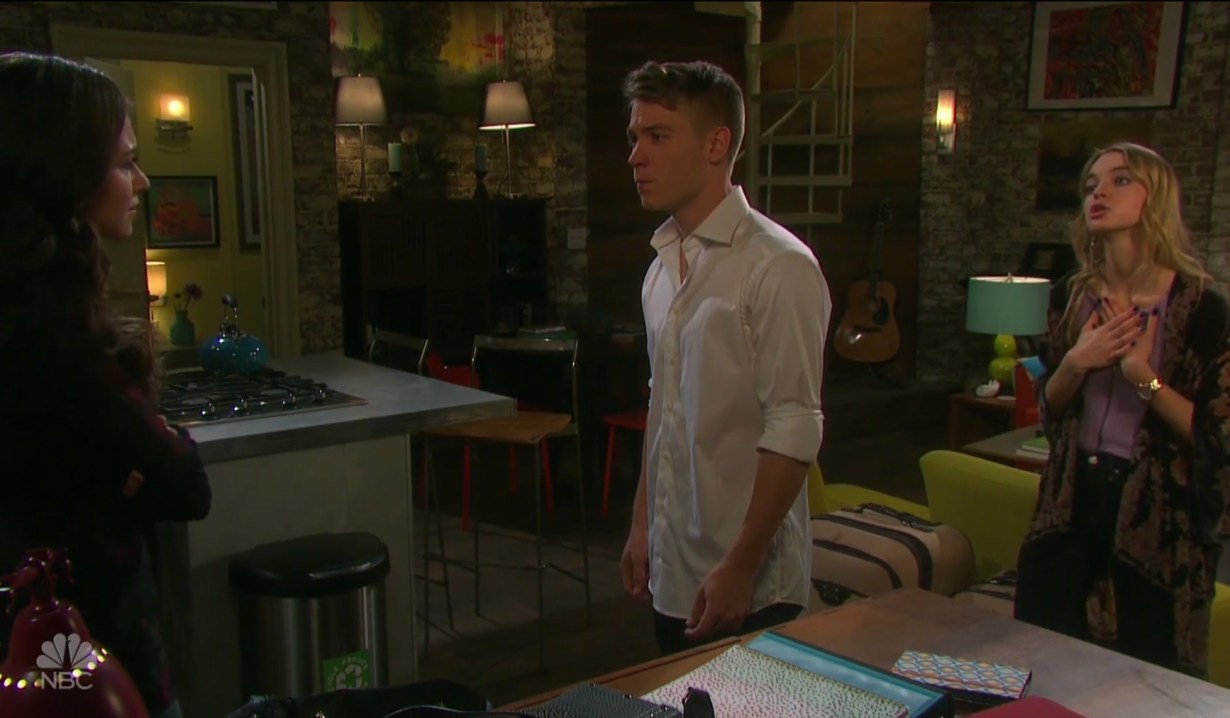 Kate has told Ted the case is based on a lie but he is okay with it given the amount of money he’s being paid.

Justin and Sonny have an informal meeting with Leo and Ted in Horton Square to settle things. Justin tells Ted that Sonny denies all of Leo’s claims, including that they met at work and not on a dating app. Leo denies using a dating app, and when Sonny tries to pull up Leo’s profile he finds it’s been deleted. Leo dishes out lies about how they met and that Sonny harassed him from the beginning. Justin asks if there is proof of harassment. Ted produces transcripts of texts from Sonny’s phone to Leo’s. Sonny remembers the other day when he lost his phone, and accuses Leo of using it to send the messages. Ted also produces photos of Sonny seducing Leo in the office and calls him a sexual predator. Ted writes down a figure to propose a settlement, which Justin laughs at. Ted says they’ll see him in court. Sonny lashes out at Leo and tells him there are real victims of harassment and demands Leo be honest. Leo states that Sonny forced him to have sex with him and now he will pay. At the Kiriakis Mansion, Brady confronts Victor about knowing Theresa was alive all along and advising her to leave Chloe for dead in Mexico. Maggie is stunned to learn Chloe was in danger as Victor defends his decision. Brady lets Victor know he’s never taking Theresa back and will marry Eve. Victor tries to dissuade him and offers him the CEO position at Titan, which Brady shoots down for the second time. Maggie learns of Victor’s prior offer to convince him not to marry Eve and is further shocked. Brady notes Phillip was the only smart one in the family to get away from Victor, and now he’s following his lead. Brady reveals he and Tate are moving out in the morning and he walks out. A furious Maggie tells Victor he will be bunking in the guest room until further notice. Maggie finds Brady in the foyer and tells him she’s sorry to see him go and for what happened. Brady feels liberated from his Grandfather’s shadow and knows he and Eve will be happy. Maggie warns him that Theresa likely won’t give up without a fight. JJ runs into Theresa at the Brady Pub, where she cries to him about Brady leaving her for Eve in spite of all she did to protect him and their son. JJ believes Brady will eventually come around and see what she did, and suggests he is just hurt and angry right now. Theresa thinks maybe JJ is right, and Brady will realize Eve is all wrong for him in time. Theresa dreads having to beg Kayla and Roman for a place to stay, so JJ offers to let her stay with him. She thanks him and gives him a huge hug.

More: Days promo: Will tries a cure for amnesia Ciara walks into the apartment and finds Tripp and Claire naked on the couch together. She fumes as Tripp and Claire swear they didn’t have sex. They explain how they ended up in the situation, with Claire having just been dumped and Tripp feeling down over Ciara leaving him. However, they realized what they were doing was wrong and stopped. Ciara doesn’t believe them and cries she came here to try and work things out with Tripp. Tripp doesn’t understand why she broke up with him in the first place and presses her to tell him whatever it was she wouldn’t tell him. Claire realizes what Ciara was keeping from him and urges her to tell Tripp the truth. Ciara reveals she pushed him away because she was raped. He was the first man she got close to since the rape, and it brought the memories up for her. He is stunned, but she doesn’t want his pity and hates the both of them. She storms out. Tripp later tries to call her, but she doesn’t answer, and he worries what she may do. On the street, Ciara takes off on her bike. Later she lays unconscious on the road next to her wrecked bike.

Ted meets with Kate in the park and feels things couldn’t have gone better. He suggests they get a drink to celebrate, but she refuses because they can’t be seen together. Ted hopes in the future they can plan a more private celebration. Kate appears troubled by his advances.

Back in the square, Justin admits to Sonny things don’t look good for him.

Justin and Sonny are floored when Leo’s lawyer shows them damning evidence in their case.