Friday June 1, 2018: Theresa's lies come out, Paul worries he'll lose Will if he gets his memory back, and Marlena assesses Ben to see if he's recovered at all. 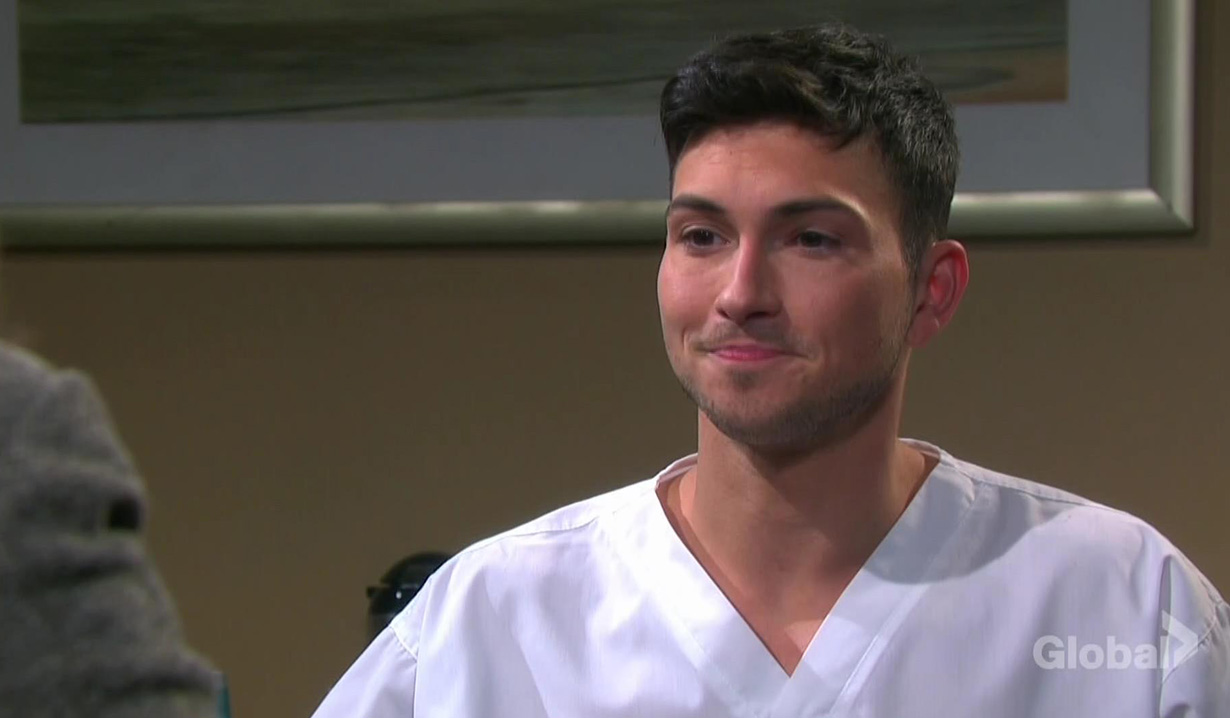 Eve and Chloe appear at the Kiriakis house. Brady hugs Chloe, glad she’s safe. Chloe blurts that it’s no thanks to Theresa. Eve discloses how Theresa left Chloe at the same compound she was locked up in. Brady’s put on edge and demands Theresa tell him the truth. Theresa says Xander convinced her that Mateo would kill her if she took Chloe. She apologizes and Eve looks away, exasperated. Chloe yells that her so called friend let her be a prisoner. How could she? Theresa cries and admits Mateo threatened to kill Brady and Tate. Chloe realizes that Theresa’s the one who warned Mateo that John and Paul were rescuing her. Chloe details what went down and how John almost died. Theresa apologizes. Eve calls her sister a “selfish little bitch.” Brady asks how they got away. Chloe’s voice breaks as she says she killed Mateo when he had a gun pointed to Paul’s head. She runs out and Eve snipes at her sister for manipulating her into stepping aside. Brady’s surprised at her words. Eve goes and Brady wonders who Theresa is. Theresa claims her kidnapping made her selfish again but she can’t apologize for wanting to be home with her family. Brady gives her the boot so she decides she’s taking her son, too.

At the loft, Tripp reels from Ciara’s decision to break up. She’s going to spend the night at her mom’s place. Tripp begs her to tell him what’s going on. He wants to be with her. Ciara tears up. “We can’t always get what we want,” she says, storming out. Once she’s gone, Claire arrives home from South Africa. He’s surprised to see her. She reveals Theo dumped her. She cried the entire flight home but says her lies came back to bite her. Tripp in turn reveals that Ciara dumped him. They commiserate and Claire kisses him.

At the Martin House, Paul worries about Will being a guinea pig for this drug which may not give him back his memory and which could kill him. Paul wants Will to give it some more thought. Will admits he’s unsure if he’ll go ahead with it. Part of him wants those memories while the other half thinks it’s best to leave them buried. Still, this could change countless lives, though it is a risk. Will assumes Paul’s afraid he’ll reunite with Sonny. Paul is honest that he’s afraid of being third wheel again. Will doesn’t see that happening. His connection is with Paul, not Sonny. He wants to see what their future holds, as does Paul. Will kisses Paul and asks him to support his decision. Paul will be there for him no matter if it’s good or bad. He calls a contact to get them started.

Marlena visits Ben in a facility. He’s glad to see her. She’s there to assess if he’s sane. He nods, encouraged. He tells her how sorry he is. He doesn’t want to hurt people anymore – the way he hurt her. Marlena asks when he realized right from wrong. He shares that it was six months ago when Sami returned to Salem and forced him to strangle Will again. That’s when he realized the horror he had done. He couldn’t go on. His priority is getting better. He knows he ruined lives and there’s no forgiveness for that but he’ll spend his life trying to make peace with what he’s done. Marlena digs in her bag and retrieves headshots of Will, Wendy, Serena and Paige. Ben starts to sweat and rub his brow. He calls himself a monster but when he saw Will alive, it changed everything. It gives him hope. Ben wants to start fresh and be a good man. He thumps his chest for good measure. Later, he looks up and whispers, “Thank-you.” Marlena drops by SPD with details about visiting Ben. She says he’s not delusional and he’s remorseful. Rafe and Hope think he’s lied. She can’t file the objection in good conscience.

Theresa fights for her man.

Claire and Tripp get hot and heavy.