Wednesday May 30, 2018: Chad struggles with the aftermath of Abigail's DID, Laura shows up to take Abigail for treatment in Boston, and Gabi tries to defend herself over Diane's death. 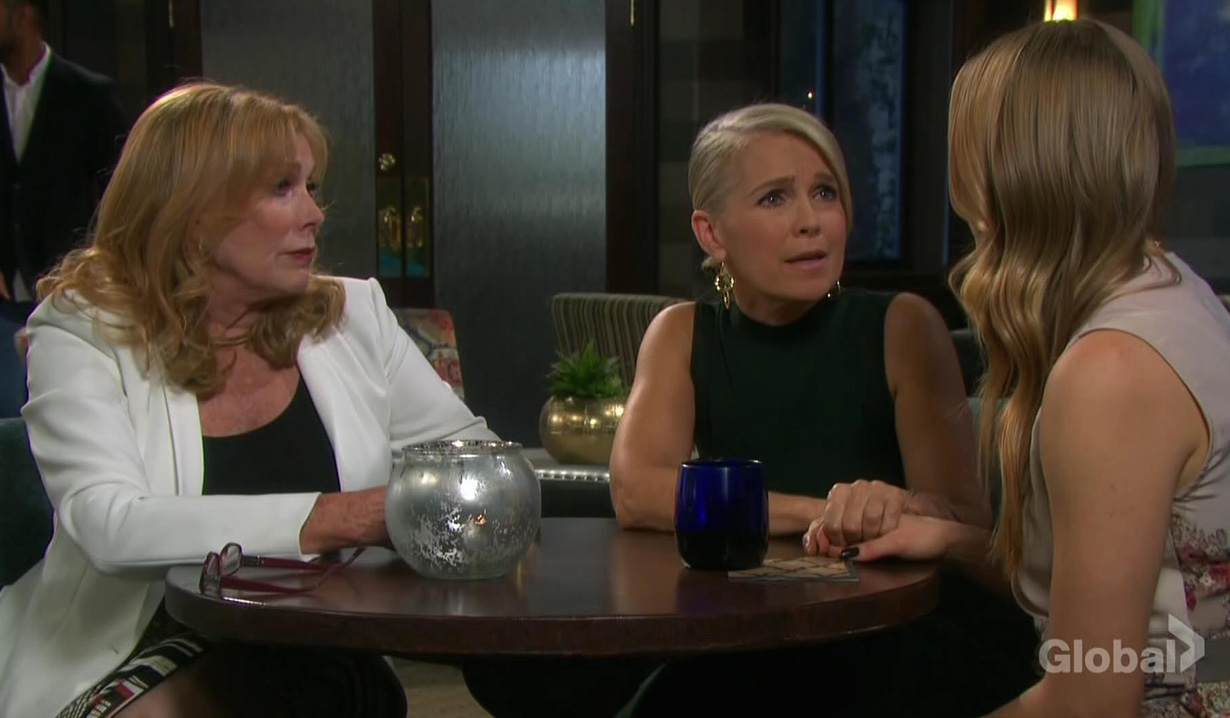 At Doug’s Place, Abigail is glad to hear Gabi’s sentence was overturned and she’s being released. Abby is happy and wished she could see her. Abs’ guilt kicks in until Chad tells her that’s enough. It’s over and he’s sure Gabi feels nothing but joy right now. He thinks Abby should give Gabi space. Jennifer and her mother, Dr. Laura Horton, arrive and Abigail rushes to her grandmother’s arms while Laura promises to help her niece by treating her once more but in Boston. She says the judge agreed. Abigail trusts her grandma but doesn’t want to be away from Chad and Thomas. Chad has difficulty with this as well but agrees she should go. They embrace and Laura thanks Chad for his faith and support. Chad struggles with his tears and Abby wants time alone with her grandma and mom, so Chad goes for a walk. The women discuss Abigail’s illness and Jennifer recalls a time when she too feared she’d have DID. Abigail struggles with guilt and her personalities. Laura says their goal is to integrate them. Abby asks if her bedding Stefan means that she is attracted to him deep down. Nobody answers but Laura says all this will come out in therapy so she can make peace with what the alters did.

Rafe and the prison warden find Gabi cowering on the floor with a dead Diane beside her. Gabi explains Diane tried to kill her and when she woke up she found her like this. The warden doesn’t believe her and leaves while Rafe tells Gabi to stop talking until they get her a lawyer. Later, the warden returns and says he’s polled the inmates and they saw Gabi with a syringe, earlier. He leaves gain and Gabi denies that happened and starts to break. She can’t go through this again. Rafe says they’ll be checking the security footage. Warden returns and Gabi blames him, since the guard left his post. The warden comes at Gabi and Rafe slides between them. The warden goes to check the tapes and Rafe hugs a crying Gabi.

At SPD, Hope and Marlena talk about Abigail getting the psychiatric help she needs. Talk turns to Marlena’s wedding. Marlena hopes Hope and Rafe will come together. Hope thinks it’s too soon to even discuss that. A call comes in and Hope’s furious. She relays the news that Ben Weston could be up for release. Marlena’s incredulous. Hope calls Ben a monster but Marlena disagrees. As a doctor, she sees him as a candidate for recovery. She compares it to Abigail’s case which makes Hope look at her as if she has two heads. Hope reminds Marlena that Ben’s a serial killer. Marlena says they’re both mentally ill and what drove Ben is the same thing that drove Abigail. Hope asks Marlena to prove Ben’s sanity before they let him out. Marlena will makes calls and see if she can evaluate him to see if the breakthrough is genuine. If it’s not, she can file a report against his release.

At the pub, Steve tells Kate that Visionary Bionics has a cure for his blindness. Kate says DiMera owns it and she heard musings that they were developing a bionic eye. Steve wants to know how he can sign up to be a testing subject. Kate apologizes. She was fired and Chad quit so she doesn’t know how she can help. Kate suggests he ask Stefan but Steve angrily pooh poohs that idea, after what Stefan did to Abigail. Kate wishes Stefan would get his.

Kayla arrives at the DiMera mansion to ask Stefan for help in allowing Steve to be the test case for the bionic eye. Stefan reminds her of the nasty things she’s said about him and is surprised she’d come to him. Kay has no choice and she heard the technology has potential to cure her husband. Stefan’s working on a deal to sell it to the US government. Kay suggests University Hospital could acquire the technology thus paying Stefan immediately. Stefan doesn’t think t he hospital would have enough money. Kayla says if he did this for her, Salemites would see him in a new light. He’d go from “pariah to hero overnight.” Stefan shrugs. It won’t work. Kayla presses him so he agrees to it under the condition that he help her destroy Kate Roberts. Kayla looks pained and when Steve calls and tells her that Kate can’t help them with Visionary Bionics, Kayla disconnects. She declines Stefan’s offer. Before she leaves, Stefan hands her his business card in case she changes her mind.

Kate finds Chad at the square. He tells her about Laura’s arrival and Kate snidely wonders what possibly Laura could help with since she did “such a bang up job last time.” Kate asks how Chad is handling all this, including his wife having sex with his brother. Chad talks about the hurt and confides that Gabi suggested that Abigail had sex with his brother to get back at him for his fling with Gabi while Abigail was presumed dead. Chad hopes Laura can help his wife so he can move on. He kisses Kate’s forehead and goes. Later, Stefan calls. He assumes she’s enjoying her freedom now that the authorities haven’t arrested her. “Time’s up, Kate,” he says, disconnecting.

Chad returns to Doug’s Place and alone with Abby, he’s told that Laura wants her to leave for Boston tonight. Chad considers it and guesses the sooner she leaves means the sooner she returns. They smooch and Abby promises to do what she can to return a healthy person. Chad nods.

Kayla arrives at the pub and Steve fills her in on his talk with Kate, citing the reason he spoke to her was out of desperation to see. Kayla fingers Stefan’s card and frowns.

Ciara pulls away from Tripp once more. 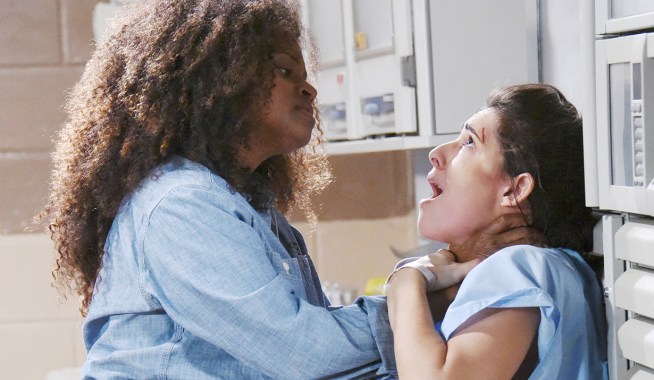 Chloe Kills Mateo, While Gabi Awakens to Her Own Nightmare

Brady and Theresa's Romantic Evening Gets the Kibosh From Eve & Chloe