Chloe Kills Mateo, While Gabi Awakens to Her Own Nightmare

Tuesday May 29, 2018: Eve shocks Brady with her decision to step aside, Victor learns about the lawsuit against Sonny and isn't happy about it, and Gabi gets a final visit from Diane. 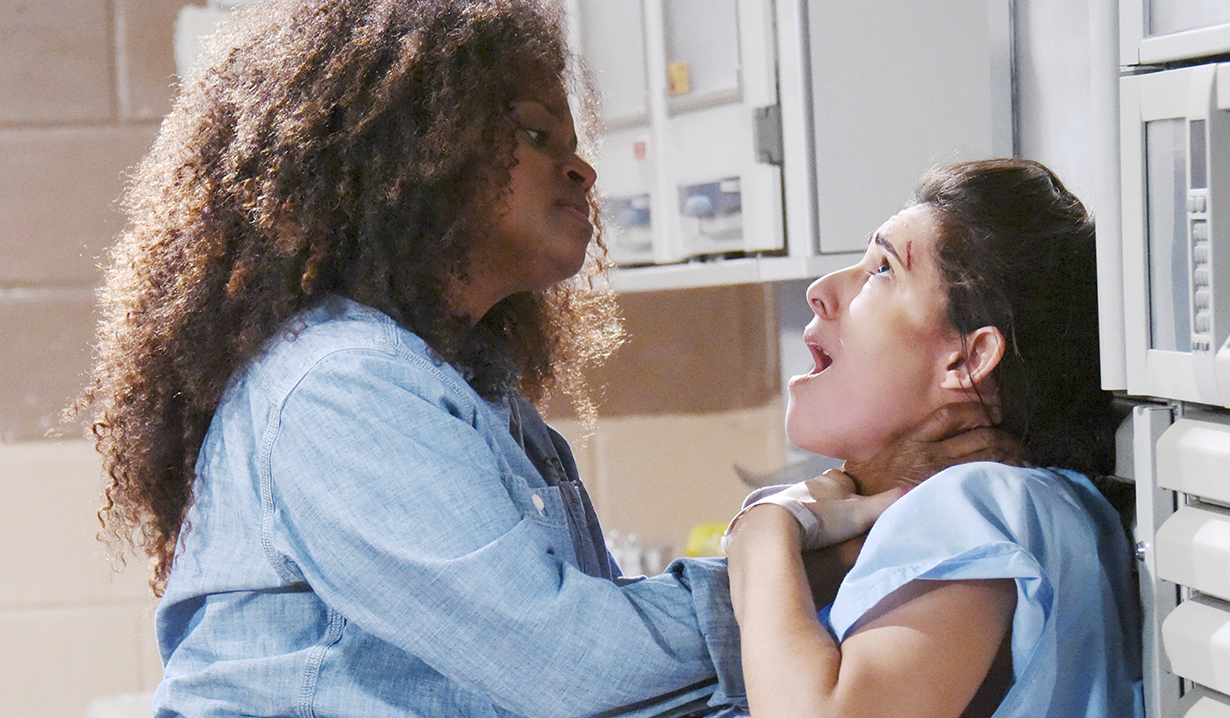 At the Kiriakis mansion, Victor tells Sonny how impressed he is with his job performance. Sonny cringes and opens up about Leo’s sexual harassment lawsuit. “I was tricked,” Sonny says. Victor can’t believe he allowed this to happen. “I just let my guard down,” he says, and “my ego was bruised.” Victor thinks he’s a poor judge of character. “First Will Horton and now this hustler.” Victor fires him. He’ll have to call an emergency board meeting.

At Martin House in Will’s room, he and Arianna play Candy Land. Lucas arrives. He comments on their face paint that they had done when they were out. Will gets Arianna to pack up the game and the gentlemen step outside. Lucas relays good news that Gabi’s being released. Will is overjoyed but won’t tell Ari until Sonny gets there. He calls him while Lucas heads inside and lets Ari paint his face.

In the prison infirmary, Gabi thanks God for getting her out of the joint when Diane appears. Gabi doesn’t want trouble but that’s what’s on Diane’s mind. Diane heard she’s being sprung and assumes Rafe pulled some strings. Gabi denies that. Diane wants revenge and tells Gabs she’ll be leaving in a body bag. Gabi vows to never lose her daughter again. Diane maintains that it’s not up to her. She gets up on Gabi’s bed and tosses her call button away. They struggle and cross the room where Diane chokes Gabi out and when Gabi wakes up, Diane’s dead with a syringe in her neck.

In Mexico City, John and Paul find blood on the wall just as Mateo walks in with his gun in hand. John points his own gun at Mateo and Paul asks where he’s keeping Chloe Lane. Two of Mateo’s men walk in and John’s forced to drop his weapon. He wants Chloe. Mateo scoffs at that. When he asks which of them to kill first, John steps in front of Paul, causing Mateo to realize they’re related. Paul admits he’s John’s son. Both men offer themselves in place of the other, then Mateo suddenly groans and falls to the floor as Chloe stabs him in the back. John and Paul act fast and grab the other two men, who promise that they’ll hunt her down.

At the Salem Inn, Brady has come to a decision which is partially based on his son, which is most important. Eve interrupts and says she’s decided to step aside. Tate needs his mother. Brady’s shocked and argues that her needs mean a lot, too. Theresa rushes her sister with a grateful hug. She asks Brady for time alone with her sister but Brady asks Theresa to wait for him at the house. Theresa thanks her sister for doing the right thing and goes. Once she’s gone, Eve says Theresa put Brady and Tate first and she’s going to try to emulate that. It’s a sacrifice, but it’s the right thing to do and that makes her heart feel better. She’ll throw herself into Basic Black, she says, tearfully. She hands him the ring before he goes.

More: Who is better for Brady, Theresa or Eve?

Back at the mansion, Sonny gets Will’s message to come to his place and sadly passes Theresa on his way over. Victor guesses that Brady chose Eve but Theresa says Eve ‘fell on her sword’. Vic asks why she’s not jumping for joy. Theresa didn’t want to gloat. Victor smirks.”Get real.” He asks what else is going on. Theresa blurts everything out about Chloe’s kidnapping. Victor gets it and tells her to forget about it. He thinks “that bitch is getting exactly what she deserves.” Theresa denies that vehemently. Victor vows never to tell Brady just as his grandson walks in. Victor covers and Brady and Theresa go play with their kid.

Back at Will’s, Sonny arrives and the men tell Arianna that her mommy’s coming home. They hug her as she cheers, “Yay!” She paints Sonny’s face. Lucas takes Ari to the kitchen and Sonny talks about the lawsuit and what a lying money grabbing opportunist that Leo is. Sonny admits he was fired as Will holds his hand. They seem to share a moment before Lucas and Ari return. Lucas leaves and Paul calls. He relays news that he’s great. Each is glad to hear the other’s voice. Will’s excited Paul’s returning on the next plane. While they talk, Sonny looks glum.

In the square, Chloe calls Lucas. He’s shocked. She tells him she’s safe and he relays his worries for her. She tells him about the escape and that she’s coming home to him.

Days of our Lives Preempted for...