Mateo Murders Miguel After a Betrayal

Friday May 25, 2018: Eve and Theresa have it out over Brady, John and Paul prepare to save Chloe, and Miguel's killed. 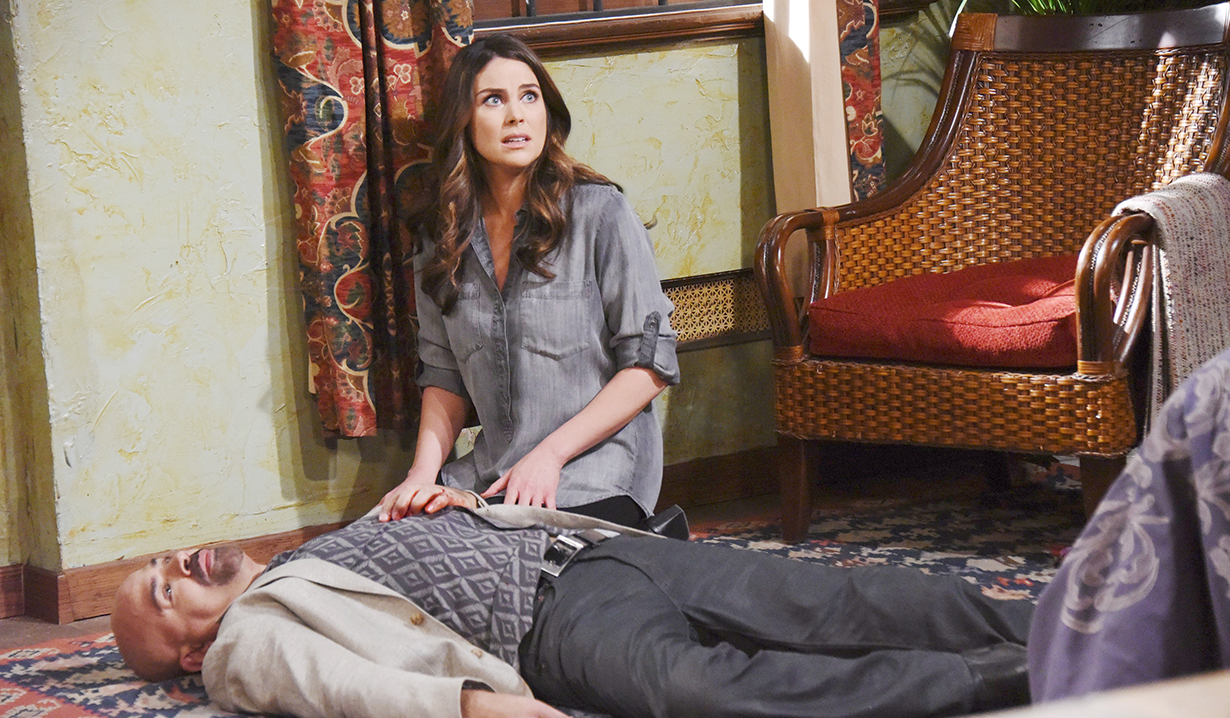 Gabi’s surprised to see Lucas taking Sonny’s place, visiting her at the prison infirmary. Each of them needs a distraction. Lucas explains Chloe’s disappearance and then talk turns to how bad Abigail feels for Gabi’s predicament. Gabi hopes Arianna isn’t angry with her for being gone for so long. Lucas reassures her by calling her daughter ‘tough as nails’. Gabi opens up about her beating and then Justin calls. Gabi’s prison time is being overturned. Gabi and Lucas are thrilled. Lucas goes off to call everyone and Diane, the nasty inmate who put Gabi there, appears.

In Mexico City, Chloe writes to Lucas, knowing that he may never receive it. She talks about needing to escape until Miguel walks in with her dinner and grabs the letter. He reminds her she’ll never escape Mateo. She wants to keep the letter but Miguel calls it a betrayal. She needs to obey him. Chloe asks if she can call her son. Miguel understands her pain. He has a daughter. Chloe begs and tells him that Parker’s daddy died and she’s all he has. Miguel hands her his phone and points his gun at her to keep her in line. In some warehouse nearby, John calls Marlena to update her that they’re planning their infiltration. She hopes he’s coming home soon. John says to trust him. Nothing will keep him from marrying her. Back at Mateo’s compound, he walks in on Chloe and Miguel just as Chloe’s about to use Miguel’s phone. Mateo is pissed and takes out his gun and tells them that once trust is broken, you can’t get it back. He shoots Miguel dead.

Theresa and Tate arrive home at the Kiriakis mansion. She holds him and vows never to leave him for that long again. If only she didn’t have to leave Chloe behind. She asks for God’s forgiveness as Maggie appears and questions her. Theresa covers and asks her to lunch. Maggie declines and goes.

Eve arrives at her room at Salem Inn to find flowers. Hoping they’re from Brady, she smiles, but then learns they’re from John and Marlena, congratulating her on her engagement. Brady calls. He misses and loves her but needs more time to think. Eve allows that. Maggie arrives to check on her and lets her know she’s seen her relationship with Brady go from toxic to something beautiful. She’s rooting for her but trashes Theresa for always impulsively getting into so much trouble no matter the cost to those around her. Maggie suggests she fight for Brady.

Back at the mansion, Theresa walks in as Brady disconnects the phone. He admits he was talking with Eve. As they talk more, Theresa learns Brady’s in love with her sister. She cries until Marlena drops by. Marlena’s surprised to see Theresa and has questions but Theresa asks to answer those later and asks after her and John. Marlena says they’re fine and she’s there to share that John and Paul went to find Chloe. Doc has no details about the case other than that. Brady’s upset, while Theresa looks visibly guilty and flashes to Mateo threatening Brady and Tate if she sends anyone after him. She takes off to call Mateo with a warning about John and Paul. She begs him not to hurt her family. Mateo disconnects and tells Chloe he’ll send someone to “clean up the mess eventually.” He leaves her with the body, while back in Salem, Brady tells his mother the whole story about Theresa’s captivity and how he loves both women. Theresa eavesdrops from the foyer as Brady admits he’s not ready to end things with Eve. She’s a true partner, though he has history with Theresa. Marlena gets it. She recalls being torn between Roman and John and asks him to follow his heart.

Back in Mexico, Paul lumbers up for their attack that they think will be a surprise. John hands him a gun. “It’s showtime.” Back at the compound, Chloe is sorry for Miguel’s death. She grabs the letter she wrote Lucas and finds a knife on Miguel. She takes it. Later, John and Paul break into the compound and then find something in Chloe’s room. “What the hell?” John exclaims as they find blood on the wall. Mateo approaches with a gun…

Theresa pounds on Eve’s door. Once she’s let inside, she declares her sister is selfish. Eve laughs. Theresa asks Eve to step aside. Eve’s giving him time to think. Theresa tries to insist that Brady wants to be with her. Eve finds her sister the selfish one who got herself tangled up with a man who took her away from those she loves. Theresa thinks her kid deserves to grow up with both his parents. Brady arrives. He’s glad Theresa is there. He has made his decision.

Days of our Lives will be pre-empted on Monday May 28, 2018 but Jaime Lyn Bauer returns to Days May 30 as Laura Horton.

Abigail Gets a Plea Deal in Andre's...

Days of our Lives Preempted for...