Abigail Gets a Plea Deal in Andre’s Murder Case

Thursday May 24, 2018: Sonny explodes when he realizes that Leo has set him up, Eric tries to get Hope to help him get rid of Xander, and Ciara cries as she deals with the memory of Chase raping her. 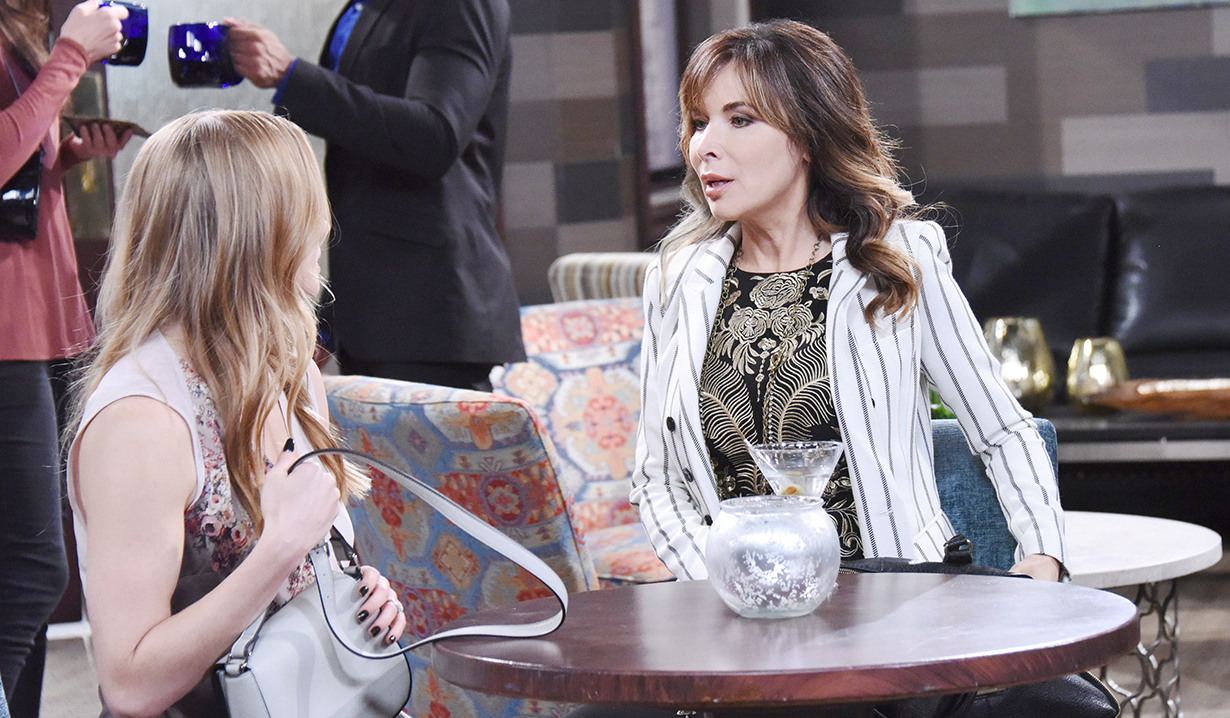 Ciara arrives at the loft and Tripp asks why she cut their night short last night after their kiss and has been avoiding him since. Ciara flashes to the kiss and Chase raping her and reassures Tripp that they’re fine. He leaves for work unsatisfied and Ciara starts to weep.

More: Which soaps are preempted on Memorial Day Eric rushes to Hope at SPD, yelling that Xander is back. Hope tries to calm him down but Eric wants him out of Salem or he’ll find a way to “kill him.” Hope doesn’t think he should say that to the police commissioner. Eric reminds her Xander shot Brady. They assume Victor helped him escape the Greek prison. Jennifer appears. She left Abigail’s arraignment and is in shock that Melinda Trask agreed to a plea deal. Jenn couldn’t stick around for the decision. She breaks down in Eric’s arms. Abigail and Chad arrive and tell the room that there’ll be no prison sentence. They hug and Abby and Chad profess their love for one another.

Justin isn’t happy to see shirtless Xander at the Kiriakis mansion. Xander is off for a swim. He goes and Justin shakes his head and finds Adrienne in the living room. She thrusts legal documents at him and exclaims that Leo is suing Sonny for sexual harassment. Sonny thinks it’s a sick joke but Justin reads the lawsuit and calls it legit. Sonny was set up. to punch Leo in the face. He calls Leo an “Opportunistic, greedy little…” Kate interrupts and he fills her in. She acts shocked. Leo will find a more open minded reporter. Will wonders “what sort of scum” would do that to Sonny. Will calls Sonny to tell him what happened and Sonny rushes over before Justin can talk him out of it.

Hope arrives at the loft to tell Ciara that Abigail’s not going to prison. Ciara’s glad. Hope lets her know Xander’s back and she doesn’t want her daughter anywhere near him. Hope can tell something is bothering Ciara. Ciara confides about her romantic evening turning sour when Grandma Julie ruined it all by reminding her of Chase raping her. She explains the kiss and how Chase got back into her head. She insists she’s over it but Hope isn’t so sure. She won’t tell Tripp so Hope suggests she talk to Marlena.

After Sonny leaves the mansion, Adrienne rants that her son is innocent. Justin admits the guy has proof. Shirtless Xander wanders in, surprised at the news. He grins. He knows lawsuits like this can ruin companies. It’s a good thing he’s back. Adrienne whispers about Xander making her skin crawl and that she wants to kill him. Xander mocks Justin and then Brady for being too busy “choosing which tramp” to be with and mentions Deimos is dead, so that leaves him. Justin asks him to get lost before he takes a tire iron to him.

Sonny arrives at the square, and Will offers him support before Sonny confronts Leo alone. Kate tells Will she wants a drink and when Will reminds her how early it is, she decides against it, then toddles off, leaving Tripp and Will surprised. “It’s not like Kate to leave when a martini is at stake,” Will declares. Tripp realizes Will is Ciara’s cousin. Will asks if he’s dating Ciara but Tripp says they sort of were but that last night something changed. Will wishes he could help but encourages Tripp to talk to Ciara. Meanwhile, Leo keeps up his lie that Sonny raped him last night on his desk and Sonny swears he won’t get away with this.

At Doug’s Place, Kate drinks a martini and tells herself that it’s every woman for herself. Abigail and Chad appear and tell her about the plea deal. Abby’s going to be starting on intensive therapy. She feels awkward but Kate remarks that she’s not one to judge after what she did to Vivian. Kate informs them that charges won’t be laid. Abigail remembers hitting Kate and apologizes. Kate’s over it. She goes.

At the pub, Eric leaves the room momentarily and Xander appears to taunt Jenn about being Eric’s second choice. Eric returns and orders Xander to get lost.

Take a look! On this day in soaps on May 24 2010, Chloe attempts to confess to Daniel that she cheated with Philip.

Gabi gets good news but a new problem comes up.

John and Paul make an attempt to rescue Chloe from Mateo.

Mateo Murders Miguel After a...