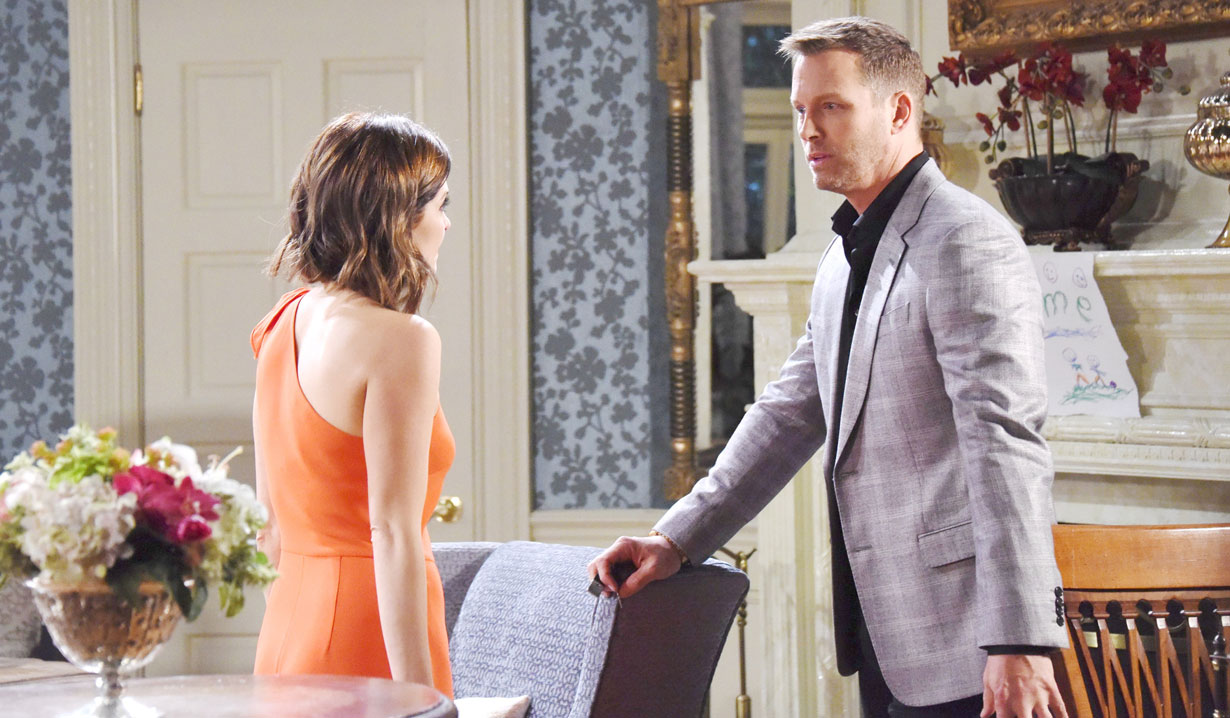 At the DiMera mansion, Stefan warns if Abby takes him down, he’ll take Chad with him. He recalls Chad beating him and taunts that Abby’s lips kissed him. Gabby will always exist and no one can take away what they shared. Chad calls Stefan’s love a delusion and brings up Vivian’s cold, dead body. Stefan moves to attack Chad but Abby steps forward and states that no charges will be made. She and Chad will be putting their lives back together. That’s the part Stefan loved about her – her take charge attitude. After Stefano leaves, Abby confronts Chad for not telling her she had sex with Stefan. He wanted to protect her and says, “It wasn’t you.” Abby remembers him walking in on them and how Gabby told Chad she wanted Stefan. How can he ever forgive her? Chad loves her and knows Abby loves him. Stefan took advantage of her. That’s why Chad almost killed Stefan. They profess their love and kiss. Even though they’re leaving the mansion, home will be where the heart is. When Stefan returns, Abby wishes him nothing but the worst. Doug’s Place. Paul relays that Miguel’s linked to a big drug lord in Mexico, who’s an opera super-fan. Chloe’s being held against her will. Lucas demands Paul give him Mateo’s address. Paul won’t let Lucas walk into an armed camp. Lucas agrees to wait until Paul calls John. Lucas takes out Chloe’s note and vows never to give up on her.

More: Kyle Lowder returns to Days, not as Brady asks what Theresa’s note means. Mateo relays how Theresa betrayed him and says, “I killed her. People who screw with me die.” He knows Chloe would never do that and wants her love. Chloe just wants to go home to her son. Mateo urges… if Chloe gives herself to him once, she’ll know she has nothing to fear. He asks that she not take too long to realize what they can have, kisses her hand and leaves. Chloe looks at Theresa’s note, cries then writes a letter to Lucas. She prays he’ll rescue her from this hell.

Back in Salem, Brady is stunned to see Theresa at the Kiriakis mansion and thinks he’s hallucinating. Theresa steps toward Brady but he halts her – she abandoned them! In tears, Theresa begs him to let her explain, but Brady brings up her drug-use and partying and how Tate’s been crying himself to sleep for months. Theresa sobs, it’s complicated. She lied to protect him. Theresa explains about Mateo. She had to make Brady think the worst of her. Brady wonders how she got home if Mateo held her against her will. Theresa flashes back to escaping Mexico with Xander. Brady seethes and invites her to tell him the whole complicated story. Theresa goes over how Xander found her and brought her back to Salem. She professes her love, but Brady’s furious to hear she’s already seen Tate. Brady tries to compose himself and wonders why she didn’t come to him for help. Theresa knew no one could protect her, not even Victor. Brady screams, “Victor knew?!” She again reminds him everything they did was for his protection and brings up Eve – and how they’re not together anymore. Brady wonders how she knew about Eve. Theresa thinks back to Chloe telling her and rambles as Brady says there’s something she needs to know. When she kisses Brady, he kisses her back.

In the park, Eve wonders what Xander’s doing in Salem. Over talk of Theresa, Xander reveals that Theresa owes him. Eve doesn’t care about Theresa, not after what she did to Brady. When Xander touches Eve, she lashes out. Jenn and Eric appear. Eric grabs Xander and pushes him into the square. Xander taunts Eric about his hand-holding with Jenn and wanting to pay back Nicole. Eric warns him not to say Nicole’s name. He knows when Brady learns Xander’s back, he’ll make sure Victor runs him out of town. Xander knows he’s the least of Brady’s worries right now. Back in the park, Jenn makes sure Eve’s okay and hears that she and Brady are engaged. Brady deserves to be happy and Jenn won’t allow Eve to feel guilty for being with him – Theresa walked out on him. Talk turns to Chloe and how she walked out on Lucas. After Eve leaves, Eric joins Jenn and admits Xander taunted him with Nicole. Jenn knows that must have hurt. Eric doesn’t deny it but is happy to now be with Jenn. She brings up Eve’s engagement to Brady. Back in the square, Paul spots Xander and orders him to leave town. Xander refuses and anticipates all the fun to come.

Eve walks into the Kiriakis mansion and sees Brady and Theresa kissing.

Eve’s stunned to find Theresa back in Salem.

Ciara Flashes to Being Raped by...