Friday May 18, 2018: Abigail asks Stefan to tell her his version of what happened between them, Chad tries to defend Abby to Gabi, and Victor is shocked to see Theresa is back in Salem. 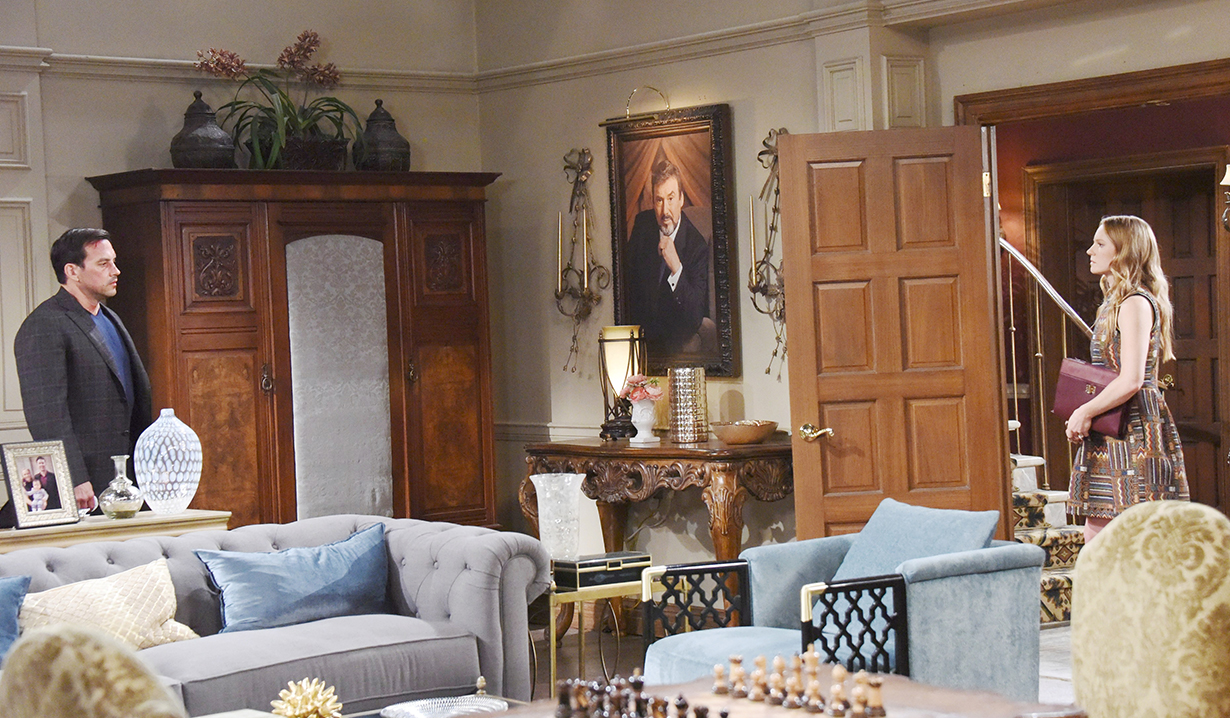 Chad walks in on Gabi talking to herself at the Statesville infirmary. He tells her that she’ll be out soon. She knows. Abby told her. Gabi’s glad she did because now she knows how much it hurt her and that it almost got her killed. Chad tries to defend Abby who wasn’t in her right mind. Gabi doesn’t understand but is trying. She’s also trying to forgive her but she can’t. Chad too says he’s not sure if he can forgive her and move past it. He walked in on her in bed with Stefan. He has to keep reminding himself it wasn’t Abby. Gabi wonders if subconsciously Abby wanted to hurt them out of jealousy. After all, she named one of her alters Gabby. Chad says Marlena explained all of that. Gabi’s still unsure and wonders if it’s payback. Chad’s shocked that Gabi let it slip that Abby had sex with Stefan. Chad runs off to see if his wife’s okay. Later, Gabi’s anger turns to Stefan, too. She’ll make him pay.

Abigail finds Stefan at home. She lets him know she came from seeing Gabi and knows what he did. “You raped me, son of a bitch.” She slaps him across the face. He’d like to give his side of the story. Abby demands he tell her everything but warns not to turn it into some gothic romance story because that would make her sick. Stefan explains how he first found her in his room with the wig on and how he protected her, even though she was going to frame him for a murder he didn’t commit. What stopped him is Gabby kissed him. Abigail looks puzzled. Stefan talks about being enthralled by her beauty when they first met but Gabby was attracted to him – not Chad. She calls him cruel and selfish when he explains he couldn’t resist. He and Gabby were in love and she was afraid of disappearing, so she came up with the idea to make love. Abby starts to recall and snaps that Gabby wanted to get rid of her permanently and Stefan was fine with going along with it. She screams at him and then says she’ll tell the police everything, just as Chad appears. Stefan tells her if she sends him to prison, Chad goes with him.

At the pub, Kayla’s upset to learn Steve wants Roman to take over for him at Black Patch. Steve implores her to understand that he can’t do the job anymore. John walks in and assures his friend he’s not quitting. Steve sighs. John has faith Steve’s eyesight can be restored by biorobotics. There’s a company called Visionary Bionics who has a working prototype. Steve’s overwhelmed. If it’s true he wants it so he can see his beautiful wife and children again. John says he wants his best friend to watch him marry Marlena again as his best man. Marlena asks Kayla to be her maid of honor, making Steve and Kayla both thrilled. Once John and Marlena leave, Kayla reads up on Visionary Bionics and learns they’re owned by DiMera Enterprises. At the hospital, Brady wants to start working on Bella but Eve reminds him he has one more stress test before he can do any of that. They kiss, passionately. Later, Brady dresses and asks her to pack her bags at the Inn and move back into the mansion tonight.

Xander shows up at the Kiriakis mansion. Victor’s not happy to see him and orders him out until a nervous Theresa walks in. Victor asks how their paths crossed. Xander explains that she convinced him if he brought her home, Victor would welcome him home with open arms. Victor grins and welcomes Xander home and Theresa looks relieved. They assure Victor that Mateo won’t come looking for Theresa. Xander asks for a job. Victor jokes that he has a gardener. Theresa grins. Xander goes to get food while Theresa explains how Xander saved her life. Victor is about to tell her about Brady and Eve when Xander brings Tate in. Theresa runs to him and holds him, crying happily. He knows who she is. Victor again tries to tell her about Eve but she admits she knows. She goes off to read to Tate while Victor worries that this could be a disaster. Later, Brady arrives and is stunned to see Theresa.

John and Marlena wander the square and John says he appreciates her and loves how he feels when he’s at her side. She breathes that she feels the same. He asks her to marry him in the square – with Tom and Alice. She swoons.

Xander bumps into Eve in the park. She looks worried until he tells her his return isn’t the one she needs to be worried about.

Brady’s shocked at what he comes face-to-face with.

Hope Stops Rafe From Signing the...