Thursday May 17, 2018: Hope and Rafe question Kate about the shooting, Leo seduces Sonny at the office, Chad attacks Stefan, and Gabi informs Abby that she had sex with Stefan. 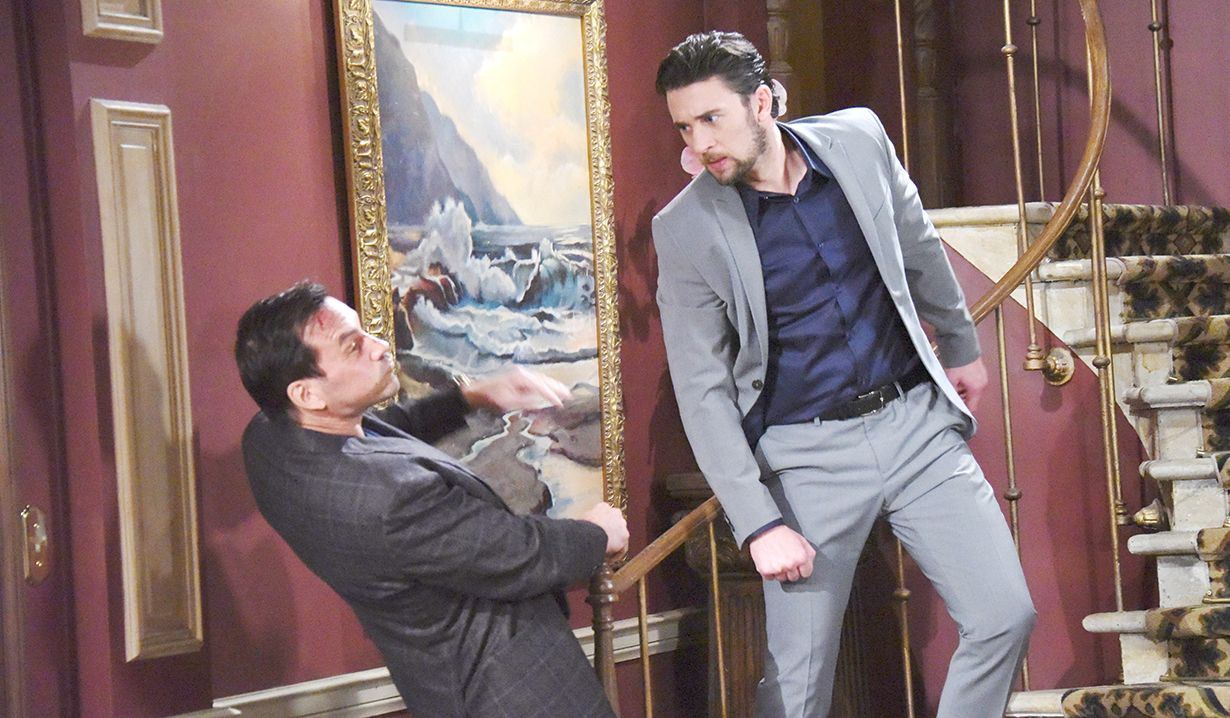 At the station, Rafe tells Hope he will sign the annulment papers, but is interrupted when Kate walks in having been summoned. Hope informs her that her story doesn’t match the forensics report because there was no gunshot residue on Vivian’s hands, so she wasn’t holding the gun when it went off. Kate reiterates her statement on what happened, but Hope feels she is leaving something out. Kate refuses to say anymore and leaves since she’s not under arrest. Rafe gets back to the topic of the annulment, but Hope stops him from signing the papers. She was hurt when she found out about Sami, but she still loves him. She doesn’t know what she wants yet but thinks there is a chance for them. She tosses the papers in the trash because she’s not ready to say goodbye to him.

Sonny catches Leo in snooping at his desk in his office at Titan and asks what he’s up to. Leo claims he was just tidying up. Sonny notices his cellphone is missing from his desk. Leo suggests he is overworked and to take a break and go some food. Sonny leaves, and Leo grabs a camera, which has been recording from a planter he hid it in. He edits the video to delete the footage of him taking Sonny’s phone. Leo texts himself from Sonny’s phone claiming Leo drives him crazy and should always work shirtless. He deletes the evidence from Sonny’s phone after.

Abigail visits Gabi in the prison infirmary and is sorry for what happened to her. They argue about what Abby did to her. Abby explains killing Andre caused her to snap and develop her alters to protect her fragile mind. She never meant for Gabi to be punished for what she did, but Gabi reminds her that it was her testimony that put her in here. Memories of testifying on the stand return to Abby. Gabi also tells her she planted evidence on her, but Abby remembers that was Stefan. She doesn’t know why Stefan did that for her. Gabi scoffs that he was in love with Gabby and they were “sleeping together.” Abby refuses to believe that, but then has another memory flash of being with Stefan and is devastated. She doesn’t understand why Chad didn’t tell her, but figures he was trying to protect her. Gabi comments maybe, or perhaps he couldn’t deal with her having sex with his brother. Abby promises Gabi that tomorrow she’s pleading guilty to killing Andre in order to get her out of jail. In DiMera mansion foyer, Chad warns Stefan he will kill him if he goes near his wife again. Stefan laughs that Gabby is still inside Abigail, and even if she doesn’t come back, they both they had sex. Chad decks Stefan. Stefan laughs at how easy it is to trigger Chad, and gloats about how hot it was with Gabby, and she is probably nothing like boring Abby in the sack. Chad grabs a letter opener and holds it up to Stefan’s throat. Stefan urges him to do it and make their father proud, after all he stole everything from him. Chad backs off, and Stefan calls him a coward and that he’ll live to regret not killing him. Chad thinks he’ll enjoy watching Stefan suffer and be alone because Gabby is as dead as Vivian. Chad informs his brother he quits, and he can have the house because he has all he needs in Abby.

Sonny stops in at the Brady Pub to pick up food and chats with Jeff the bartender. Jeff asks about that guy he was looking at on the app. Sonny explains the guy is great, but an employee, so he can’t get involved. Sonny admits he’s attracted to Leo, and Jeff suggests he and Leo keep things private.

In the Horton Square, Kate calls Leo to check in. Leo explains what he’s been up to but doesn’t want to rush things with Sonny. Kate gets an idea.

Sonny returns to work. Leo claims he found his phone buried under some papers. He hands it to Sonny, and their hands touch. Leo knows Sonny is hot for him and asks if they are going to keep ignoring their feelings. Leo can’t stop thinking about being with him, but Sonny reminds him there are rules. Leo decides to resign so they can be together. They kiss, and Sonny begins tearing his shirt off as the camera in the planter records the encounter. Chad walks into Statesville’s infirmary as Gabi thinks about Abby and says what she did was unforgivable. He asks, “What’s unforgivable?”

Abigail is angry when she confronts Stefan.

Theresa returns to Salem with Xander.

Gabi's Prison Sentence Will Be...