Gabi’s Prison Sentence Will Be Overturned, Which Relieves Everyone

Wednesday May 16, 2018: John and Marlena share their big news, Gabi learns she's going to be released from prison, and Abigail refuses to lie about why she killed Andre. 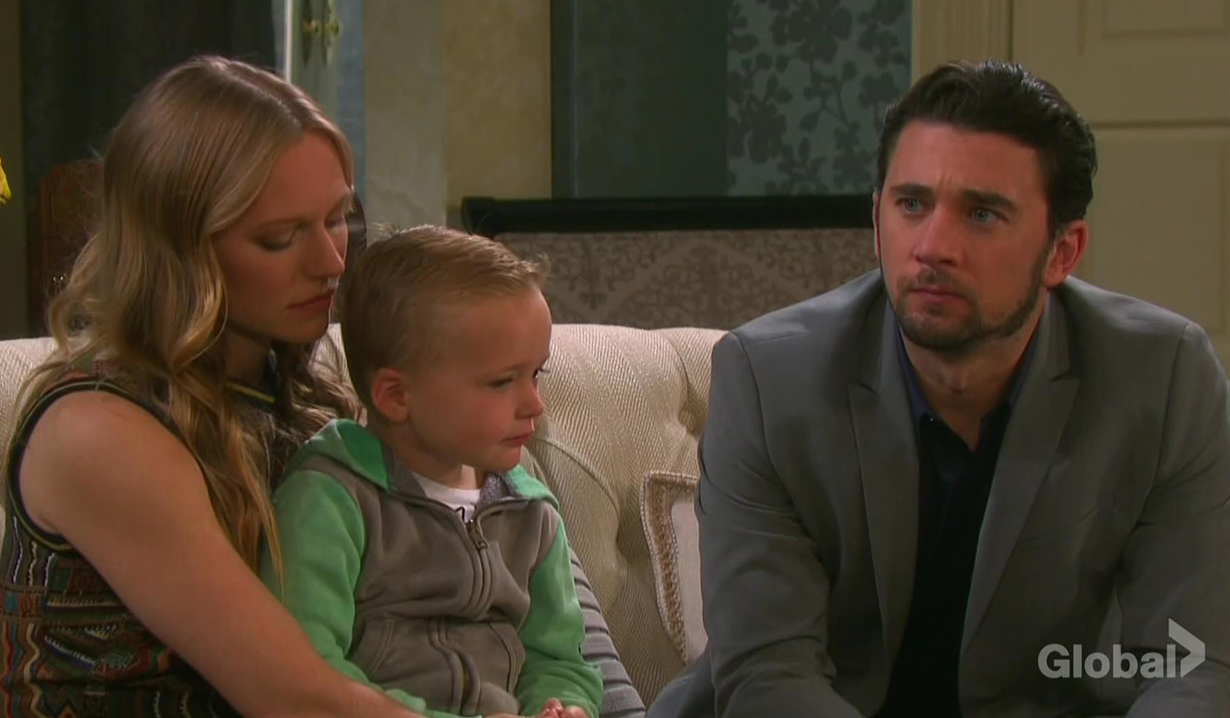 At the loft, Ciara tells Tripp there’s a lot of work to do in being the Face of Bella. She jokes about being so famous she’ll be yachting with “The Beebs,” then kisses Tripp. Claire appears, bags packed. She’s off to see Theo for a few weeks. Tripp takes her bags to her car while Ciara hopes she and Claire can be friends again upon her return.  “We’ll see,” Claire says, and mentions Theo’s still upset with her for a sking him to help her cheat. Ciara goes to get a gift for Theo and Tripp returns. He and Claire discuss all that’s gone down recently. They’re glad to have remained friends. They hug as Ciara returns looking jealous. Claire goes and Tripp and Ciara play a zombie killing game and make a date.

In the square, John asks Marlena to start planning their wedding before the next big disaster sets in. “What do you say? Will you marry me one last time?” She gasps with delight. She jokes that she’s used to being single, what with all of the “gentlemen callers,” then says she could marry him every day for the rest of her life. She accepts his proposal and they kiss.

At SPD, Abe tells Hope that despite their problems, she and Rafe make a good team and did a wonderful job on Andre’s murder case. Val arrives and Abe invites Hope to dine with them.

Rafe visits Gabi at the infirmary in prison to inform her that Abigail confessed to murdering Andre. Rafe relays the entire story about Andre working with Vivian to steal Gabi Chic and how Abigail accidentally killed him when she cornered him and felt threatened by him. That’s when she split into more personalities. Gabi’s speechless.

Abigail snuggles Thomas, (played by Justin Allan), with Chad at the Kiriakis mansion. Justin appears and they discuss Abby’s case and how she never fully recovered from her last breakdown. Justin thinks she can plead innocent by way of insanity. He goes and Abigail refuses to take the deal. Maybe prison is better for her. She worries about Gabi and notices Chad looks upset. He tells her about Gabi’s beating. She wants to see Gabi but Chad reminds her she needs to stay calm. He snarks offhandedly on what “that son of a bitch” Stefan did to her and Abigail questions what he means. He covers.

At home, Kate looks at the carpet where Vivian was shot, then at Stefano’s portrait and mutters that nobody cared for Vivian anyway. Stefan limps in and says he did and he’s going to make her pay for killing his mom. They argue about Stefan’s crimes such as kidnapping her, Vivian and Marlena. Kate can’t wait until the truth about him comes out. She urges him to step down from DiMera. Stefan laughs and then fires her and kicks her out of the house. Kate reminds him Chad owns the house but he states that he owns the mortgage. Again, he urges her to get out. Kate snipes that it’s only a matter of time before he’s done in this family and company, when the board finds out that he used insider information to get his position at DiMera. Stefan acts innocent, then vows to kill her if he learns she intentionally killed Vivian.

Abe, Val and Hope find John and Marlena making out at the square. They’re embarrassed but tell everyone their news. Marlena wants a big wedding. Claire pokes her head in and is excited to hear her grandparents are getting remarried. They hug. Claire talks about planning the wedding and brings up “Gram’s” wedding. Hope’s uncomfortable and takes off back to work – without lunch. Claire feels bad. Abe pulls her aside. He heard that she and Theo were having issues. He hopes it works out.

Justin drops by Statesville and gives Gabi some papers to sign. He’ll have her sentence overturned tomorrow. Gabi eagerly signs. Afterward, Justin lets Rafe know that the annulment will go through with or without his consent, so he may as well sign the papers. Justin goes and Rafe asks if Gabi will forgive Eli. She can’t, because of all the lies but is depressed that  she has no life. Rafe and Justin go and Abigail visits Gabi.

Rafe arrives at SPD to give Hope the good news about Gabi. Hope’s thrilled. Rafe pulls out the annulment papers and starts to sign. Hope looks downcast and says, “Rafe,” but Kate walks in to discuss Vivian’s shooting. Hope says her story doesn’t add up.

Things get violent between Chad and Stefan.

Hope Stops Rafe From Signing the...