Mateo Gives Xander Theresa After Learning of Her Betrayal

Tuesday May 15, 2018: Theresa makes a deal with Xander, Abigail's family talks about her health, and John's taken aback to hear of Brady's wedding news. 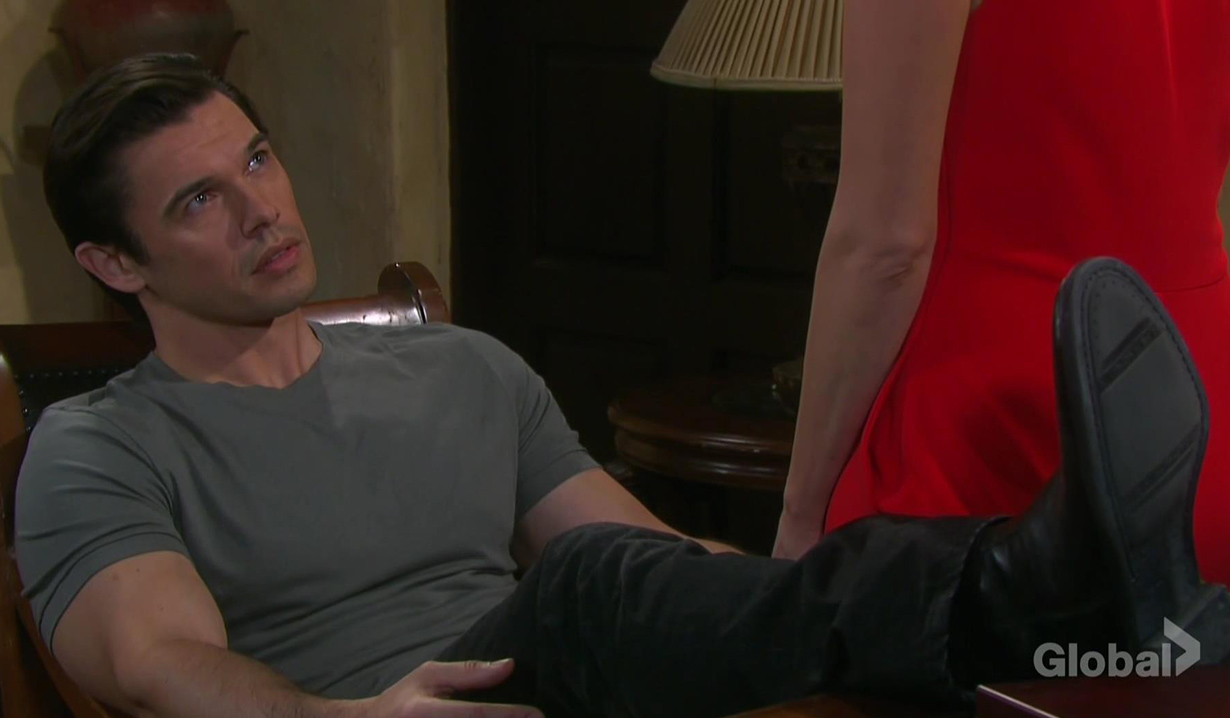 At the pub, Marlena, Roman, Steve and Kayla gossip about Kate shooting Vivian, and share their displeasure over what’s happening with poor Abigail. In the square, Jennifer tells JJ that Abigail and Chad are at home with Thomas. Eric walks up. He and JJ convince Jenn to get some lunch and JJ goes off to work.

At the hospital, Brady and Eve snuggle in his bed. Eve’s grateful to Brady for not giving up on her. John enters. Brady heard about Vivian. John hopes she’s at least at peace. Brady announces their impending nuptials and John finds it rather sudden. Brady confesses that his health scare put everything into perspective. John understands. He tries to smile. Eve leaves them alone and Brady says Victor knows and he’s not happy about it either. John’s surprised Brady turned down the CEO position for Eve. “Your mother would be very proud,” John says, because he stood up to his grandfather. But is Brady sure Eve’s the one? Brady’s sure. He opens up about his dream about Theresa.

More: Days’ Brady is in love with being in love?

In Mexico City, Mateo walks in on Xander and Theresa in his office. Xander admits he caught Theresa breaking into his safe. Mateo notices Theresa has the keys to the lock box while Xander’s holding the flash drive. Xander hands over the drive and Mateo says he heard from Miguel that Theresa acted up while Mateo was in Europe. Theresa tears up and acts jealous about Chloe, citing, “All you care about is your latest obsession.” Mateo claps, calling her outrage an act. Theresa just wanted a little freedom. Mateo will ensure Miguel gives it to her permanently. Xander interjects. Will Mateo hand Theresa over to him? Theresa panics. Xander offers a significant discount on the diamonds if Mateo throws Theresa into the deal. The men shake on it and Xander hands over the diamonds. Mateo vows to make good on his promise to harm Tate and Brady if Theresa tries anything. Mateo goes and Theresa promises to do anything for Xander if he gets her back to her family. Xander agrees to it but is surprised when Theresa says first, they need to rescue Chloe. Xander can’t wait. They rush to Chloe’s room, which is empty, and Theresa leaves her a note which reads, “I’m sorry, your friend Theresa,” before she and Xander run off.

Jenn and Eric arrive at the pub as Roman asks if it’s possible for Abigail to have a normal life again. The women separate from the men as they discuss the situation. Roman asks Steve how he’s doing. Steve’s mostly adjusting but admits sleeping is tricky as is getting around. Roman offers help whenever Steve needs it so Steve asks him to take over for him at Black Patch. Roman smiles. He’ll consider it.

Back at the hospital, JJ finds Eve staring at her rock. She tells him t hat Brady proposed. JJ wonders how Theresa would think about that. Eve retorts that she gave him up and was selfish. JJ finds it odd since Theresa seemed happy. Eve thought her sister changed too but obviously she didn’t. JJ isn’t so sure. He saw Theresa at church before she left and it seemed to him as though she was struggling. He flashes to Theresa crying to him about doing the right thing. “Whatever decision she was trying to make was torturing her.” In fact, it didn’t seem like she wanted to leave. Eve frowns. They discuss Paige and how Eve will be a better mom to Tate. They discuss JJ losing Lani and Eve’s certain that it’ll happen for him and he’ll one day be a wonderful father. JJ’s thankful for her kindness. They part and back in Brady’s room, John asks if anything would change if Theresa returned to Salem. Brady says no, she chose the life of partying over family. Eve returns to Brady and overhears him tell his father how happy he is with Eve. John welcomes Eve to the family with a hug. He goes.

Marlena and John wander the square and discuss Brady’s engagement. John tells Marlena that they should plan their own wedding. Marlena grins happily.

Abigail argues against the advice Justin gives her.

Kate faces off with Stefan.

Gabi's Prison Sentence Will Be...