Monday May 14, 2018: Theresa talks Xander into helping her get back to her family, Chloe sings for Mateo, Sonny learns that Abigail killed Andre, and Victor interrupts Brady's proposal. 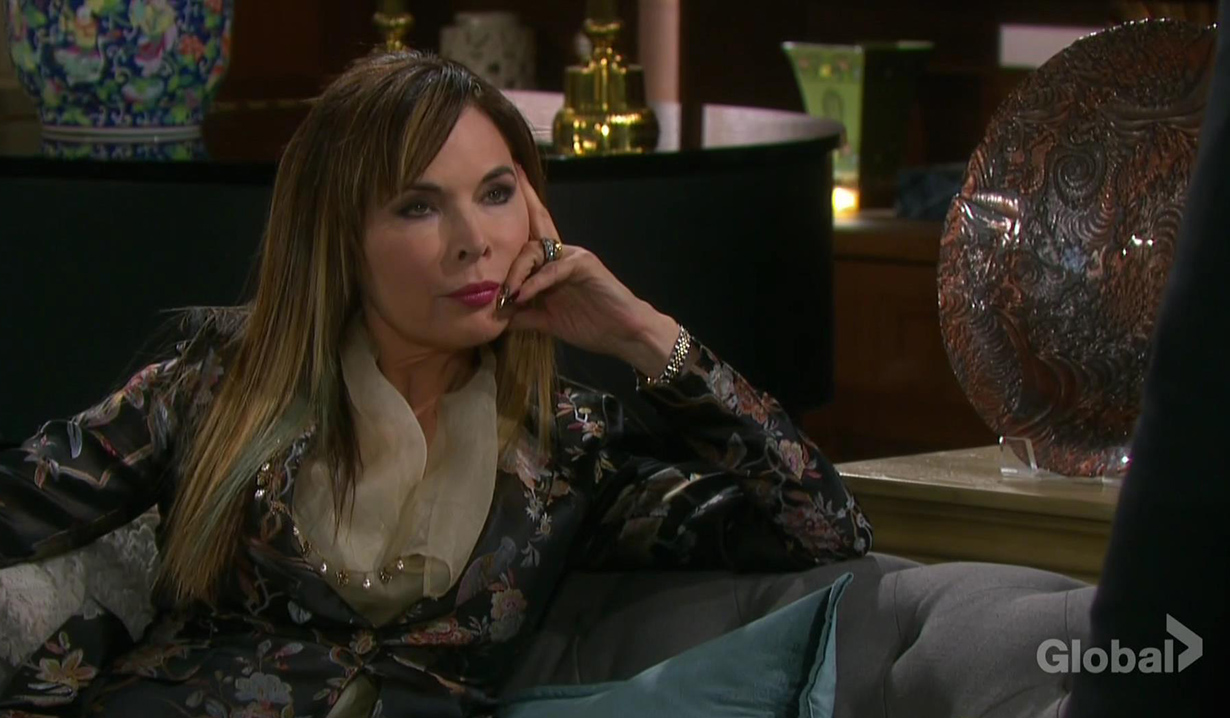 In Mexico, Theresa is frightened and shocked to see Xander. She tries to warn him that her boyfriend is the jealous type and Xander bursts out laughing. He’s there to do a deal with Mateo. They go way back. Theresa begs Xander not to let Mateo know she’s in his office or he’ll kill her, Brady and Tate. She shows Xander a thumb drive she was going to use to get dirt on Mateo so she can go back to her family. Xander wonders why he should bother helping her. She’ll get Victor to accept him back into the family. She explains that she sacrificed herself to save Brady. If Xander helps her get home, Victor will reward him. Xander admits he’s quite satisfied that she’s stuck there with Mateo. She gives him the thumb drive. In Chloe’s room, she tells Mateo she can’t have sex with him. Mateo loves her voice. He’s a jealous man and only wants her performing for him. She changes into the dress he gave her and she sings Ave Maria. He’s enchanted. He makes a move on her. He wants to enjoy her “beautiful body,” too. He won’t force himself on her. He asks her to do the Dance of the Seven Veils. He turns on some tunes and she looks around, uncomfortably. She dances and afterward, he says he won’t force her but would like her to want to be with him. She tells him it’ll never happen. Mateo admits he isn’t that patient and alludes to forcing her one day if she doesn’t agree to sex with him. Chloe asks to speak with her son. Mateo claims he’d like to make her happy but says maybe when he trusts her more. He leaves, walking in on Theresa and Xander.

More: Death is meaningless in soaps Victor interrupts Brady’s proposal to Eve in the hospital to relay news of Vivian Alamain’s death. “Kate killed Vivian. When’s the parade?” Brady asks. Victor asks for time alone with Brady so Eve steps out and Victor suggests Brady consider what’s best for Theresa and Tate before marrying Eve. Brady is confused as to why he’s doing this now. Victor’s seen the handwriting on the wall. Brady thinks there’s more. Victor will give Titan back to Brady if he dumps Eve. When Victor goes, Eve returns and Brady fills her in on Victor’s plan, which he says he’s not interested in. Brady pulls out the ring and again proposes. Eve’s astounded. She accepts.

At Titan, Sonny apologizes to Leo for the kiss. Leo apologizes for letting it happen and they both agree not to let it happen again. The phone rings and Leo answers. Kate wants him at her house – now. Leo covers with Sonny and heads out. and Vivian struggling with a gun and that Kate accidentally killed Vivian. They’re surprised. Will has to rush to work so Lucas stays behind. Paul considers that he’s out of a job since Kate hired him to investigate Vivian. Lucas asks to hire him. They head to breakfast so Lucas can apprise him of his needs.

At the DiMera mansion, Kate looks ill, staring at the blood-stained carpet. Leo turns up. He notices Vivian’s blood. He’s sorry she’s dead but he’s glad he doesn’t have to deal with her anymore. Kate intimates that Vivian told her everything. Kate’s taking over the plan. Leo’s speechless. She tells him to go back to the office and make himself desirable for Sonny.

Will stops at Titan. The guy at Spectator news desk told him that Abigail confessed to killing Andre. Sonny’s disheartened and figures everyone must be a wreck. Will says at least Gabi can get out of prison. He suggests they give Arianna the good news together. Sonny’s pleased he came in person to notify him. They grin at one another and discuss Vivian’s demise. Will goes and Leo returns. Sonny discusses Will’s visit and then Leo spills coffee all over his shirt then complains to Sonny, who laughs and lets him borrow one from his closet. When Leo removes his shirt, Sonny can’t help but pause and stare.

Kate meets Victor at the park. He’s thankful to her for killing Vivian. Kate smirks. He’ll find a way to be grateful to her one of these days…

Theresa makes a deal which leads to her freedom.

Steve has a favor of Roman.