Friday May 11, 2018: Theresa gets a surprise, Chloe meets Mateo, Brady pops the question, and Lucas isn't ready to give up. 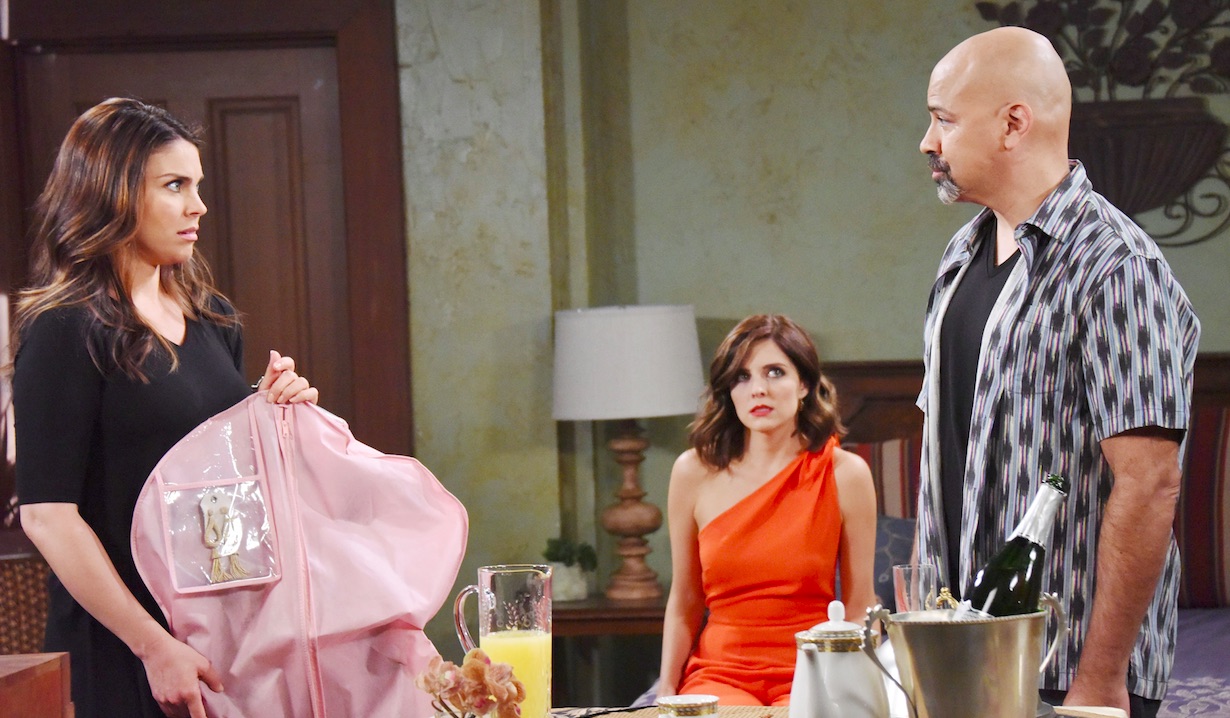 Lucas has a coffee outside the cafe as he reads Chloe’s goodbye letter. Kate crosses the crime scene tape at the DiMera mansion. She reads an article about Vivian and then catches her breath when she sees the bloodstained carpet. Kate crouches down and touches it. Unnerved, she jumps away as Lucas shows up. They discuss what happened, but Kate wants to pretend Vivian was just a nightmare. Talk turns to Chloe. Lucas can’t believe she just took off, but Kate is grateful she did. They argue until Kate backs down. She just wants her son to be happy, but she reminds him Chloe betrayed him and gave up on them. She suggests he give up as well. Alone, Lucas reads the letter again and crumples it up. He starts to set it on fire, but changes his mind. He’s not ready to give up on Chloe yet.

Chloe wakes up in her room in Mexico to find breakfast waiting for her. Theresa returns and they commiserate over their circumstances. Theresa tells Chloe of an easy way to get out of there, but Mateo will kill their families before they get home. Instead, they need to gather evidence against him. They have to get a jump drive Mateo keeps in a lockbox they can give Shane, which will help set them free. Chloe must distract Miguel so Theresa can get his key to Mateo’s office where the lockbox is. She warns it’s risky. Miguel enters the room wondering what the women are up to. Theresa covers by saying she was checking out her competition for Mateo’s attention. They pretend to fight and when Miguel breaks them up, Theresa swipes his keys. Miguel gives Chloe an outfit to wear when she meets Mateo that night. On the way out, Miguel warns Theresa she should be nicer to him now that she’s not Mateo’s number one anymore. Someone needs to have a reason to keep her alive. Alone in her room, Chloe thinks about Lucas and crumples to the floor, distraught. She pulls herself together in time for Mateo (played by Andoni Gracia) to enter and introduce himself.

Theresa sneaks into Mateo’s office looking for the lockbox. She finds it with the drive inside. Behind her, Xander (played by Paul Telfer) approaches and says, “Buenos días.”

Maggie finds Victor at home on the couch reading The Spectator on his tablet. He’s thrilled by the news of Vivian’s demise. Maggie doesn’t think he should take such glee in her violent death, but Victor reminds her Vivian buried her alive. Maggie doesn’t want to tempt fate by gloating though, especially considering Brady is on the mend. Maggie’s happy he and Eve are working things out, but Victor isn’t as pleased. Maggie points out Tate really loves Eve too, but Victor angrily states that Theresa is that boy’s mom. Maggie’s confused by him defending Theresa. He says he’s just worried about Brady being involved with that gold digger Eve. He worries about Theresa returning to find Brady with her sister. He muses it would be a disaster for everyone. Maggie agrees, but she doesn’t think Theresa is coming back.

In his hospital bed, Brady dreams Theresa visited him. He wakes up to Eve, who realizes he was dreaming of her sister because he said her name. She wonders if he wants his dream to come true so they can be one big happy family again with Tate. Brady never wants Theresa back in his or Tate’s life. He reminds her of their tumultuous history and states that Theresa stopped giving a damn about her family. Eve admits she did the same thing when she found out about his and Victor’s plot against her. She abandoned him again when she didn’t believe he was drugged. He assures Eve what she did was nothing like Theresa. He’s grateful she forgave him when he didn’t deserve it and is with him right now. He asks her to move back to the mansion. Nothing would make her happier to be with him and Tate, but she worries they’ll end up like him and Theresa. Brady knows that won’t happen because he’s a different man now. He’s committed to his sobriety and to making her happy. She wants that life, but there are a million things that could drag them apart. Brady points out how hard they tried to mess things up, but they are there trying to make it work. He pulls out a ring and asks her to marry him. Victor interrupts before she can answer. He has something Brady needs to know.

Vivian Dies After Being Shot by Kate...