Dr. Laura Explains Abigail’s Split and the Events Leading to It

Wednesday May 9, 2018: Stefan tries to fight for Gabby, Vivian pulls a gun on Kate, and Gabi and JJ learn about Abigail's illness. 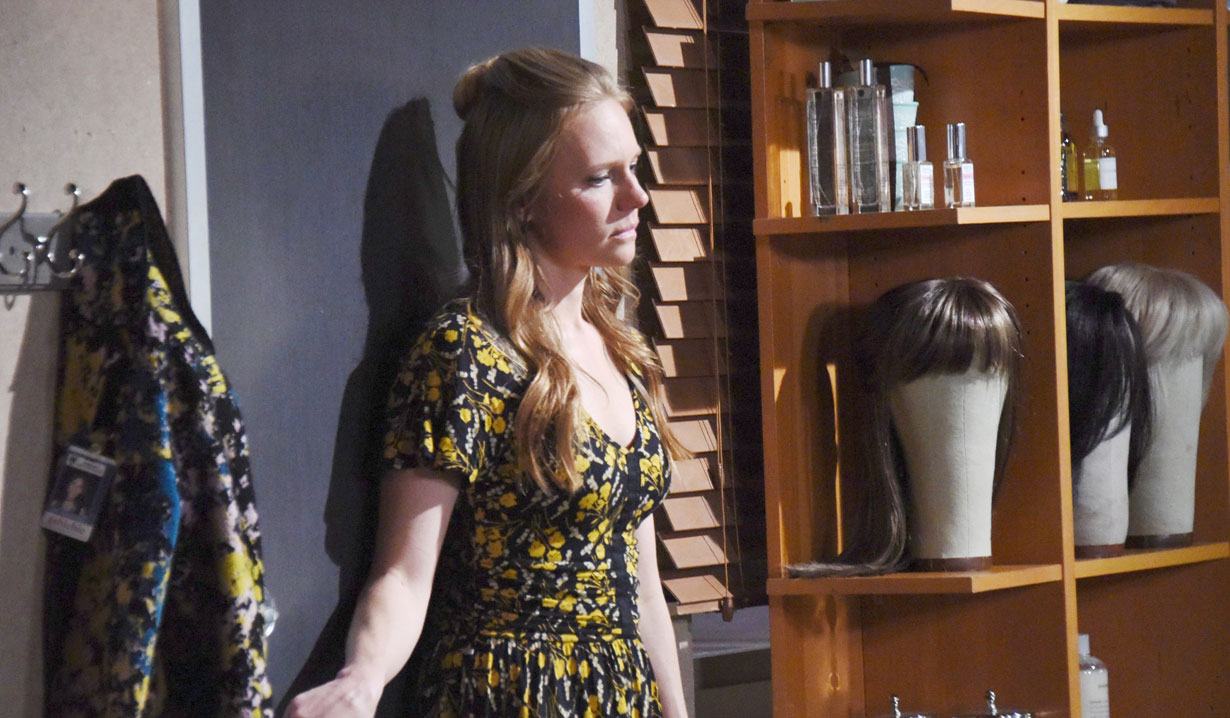 In today’s Days of our Lives recap… In Andre’s office, Abigail recalls killing Andre because she was afraid for her life. Chad says the woman they saw on the tape going into the office was her alter and asks where she came from. Dr. Laura emerges and explains Abigail doesn’t remember what happened after she killed Andre. She says that Abigail couldn’t face what she did to the man whose dying words were, “I love you.” Dr. Laura recalls Abigail leaving the office and leads Chad to Gabi’s workspace, where she saw a large promotion poster featuring Gabi and the wigs on the shelf. Dr. Laura took over at that point, put on a dark wig, Gabi’s jacket and some gloves. She let in Gabby, who took the blame for killing Andre and cleaned up the scene of the crime. Dr. Laura tells Chad that she took control back once Gabby returned to the mansion. She stashed the evidence and sent Abby to bed with him. At the DiMera mansion, Vivian asks Kate to be her partner in destroying Victor. Kate refuses, and reminds Vivian she holds all the cards. She threatens to tell Victor that Vivian has been manipulating Sonny, and the DiMera Board, and how she and Stefan sabotaged the company and stole it from Chad. Kate orders Vivian to leave town and never come back or go down in flames. Vivian grabs her purse to reveal another option. She pulls a gun on Kate, who laughs at her. Vivian had planned to use the gun to kill Andre, before Abigail bashed his head in, so it’s poetic she use the same gun to reunite Kate with her husband. Vivian admits to making mistakes in her life, but this isn’t one, and says, “Goodbye Kate.” Kate lunges for the gun and they fight over it. JJ spots Lani at the Brady Pub reading a book about baby names. She tells him that she misses him and wishes… He interjects that he isn’t the father of her baby, and suggests she name it Eli Jr, or Eliza if it’s a girl. Lani rushes out as Jenn walks in. Jenn fills JJ in on Marlena diagnosing Abigail with DID, and that Chad is trying to help her remember the truth as they speak.

Eli visits Gabi in the prison hospital and informs her the case is about to break wide open. Gabi has heard that before and orders Eli to get the hell out because he’s the last person she wants to see. Eli leaves. At the station, Rafe and Hope argue over Hope’s decision to let Chad leave with Abigail and try to jog her memory. Hope changes the subject and asks Rafe about the annulment papers, which Belle has not received from him. He states he hasn’t signed them and won’t. Rafe still loves her and is sure she still loves him too. Rafe leaves, and Jenn and JJ meet with Hope. Hope hasn’t heard back from Chad, and JJ and Jenn worry that with Stefan out of the hospital that he could regain his hold over Abigail. Later, Hope is stunned and reveals the urn lid is missing from the evidence bag.

Chad and Dr. Laura go to the park, where Stefan confronts them and vows to fight for Gabby. Chad thinks she’s gone, but Dr. Laura acknowledges she isn’t and that in the end only one personality can survive. Chad begs Dr. Laura to let Abigail get the help she needs, but Dr. Laura warns him that her mind is very fragile, and he has to let things play out between Abigail and Gabby. Chad tells Abigail that he loves her and she has him and their son, so she doesn’t need Laura or Gabby. Stefan makes his pitch to Gabby, which sends Abigail into pain. She takes the wig in her hand, places it on her head and becomes Gabby. Stefan knew she’d come back to him. She reveals she is only here to say goodbye, and she is slipping away. She tells him goodbye and kisses him. Chad rushes between them and Abigail faints. Chad catches her, and when she comes to Abigail is back. She asks if it is over. Stefan responds, “It’s over,” as Chad tells Abigail that she will be okay.

More: Chad learning about Abigail’s DID was anticlimactic Rafe visits Gabi in prison and reveals Abigail is sick with DID. Gabi can’t believe Abigail framed her and wonders why she’d do this to her. Rafe wishes he knew but swears he will get her out of prison.

In the square, Eli and Lani leave a store after crib shopping. They both talk about how hard it is seeing JJ and Gabi.

John Enos returns as Roger, who gives Paul and Will important information.

Vivian Dies After Being Shot by Kate...