Tuesday May 8, 2018: In today's Days of our Lives recap, Abigail remembers killing Andre, Paul is warned by Sonny, and Stefan seeks Gabby. 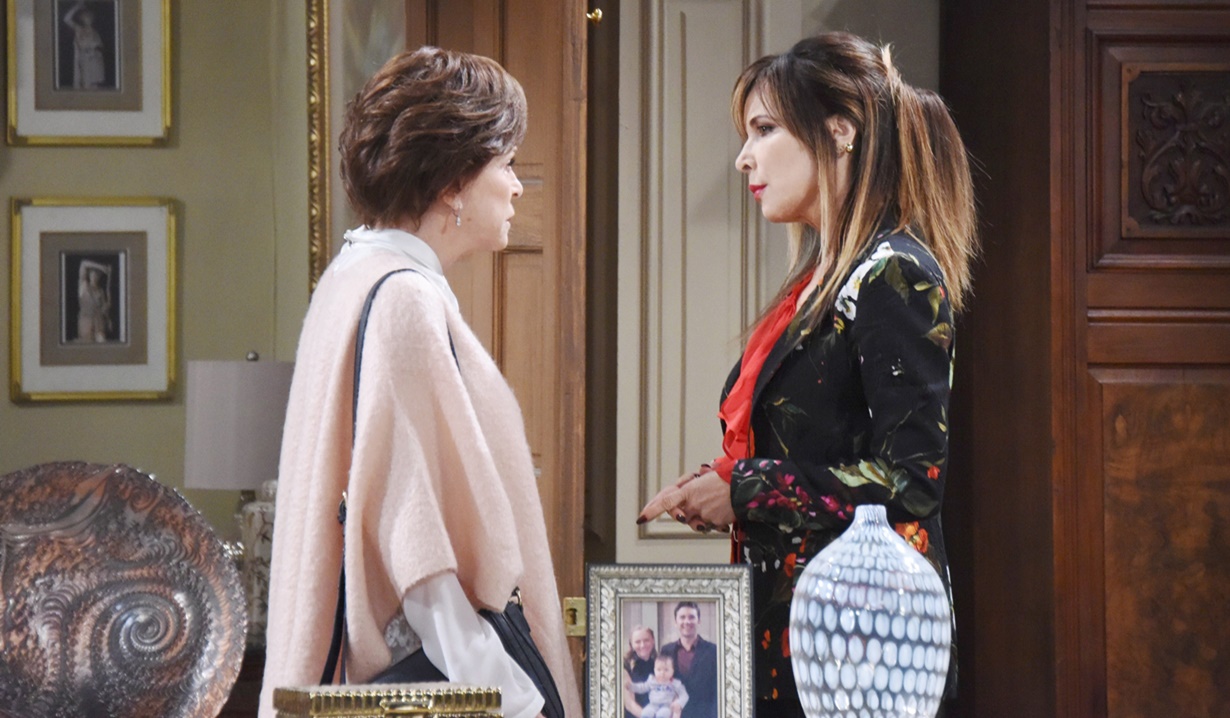 Paul arrives at Will’s door and complains it’s been almost 24 hours since they’ve seen one another. He enters, Will’s towel drops as they kiss. After sex, Will gushes about Paul being a superhero for helping rescue both his grandmothers. Will reveals Clyde told him about Dr. Rolf’s diary. Paul will help track it down. They get amorous again. At the Kiriakis mansion, Sonny reminds Leo they have to keep things professional. Leo grins. He has to get to the office. Sonny says, “Don’t forget your phone,” then sees an amazing example of Leo’s art on the screen. Leo invites him to come see it in person, but Sonny says it would be inappropriate. They settle on a lunch date.

At the DiMera mansion, Kate accuses Vivian of working with Andre to undermine her; the DiMera board will be very interested to hear it, and Marlena’s a witness. Vivian’s confident she can discredit Marlena. Kate next brings up Viv’s new best friend – Leo Stark. Vivian claims he refused to help her, but Kate argues she saw Viv give him a pile of cash. Vivian protests, but Leo appears and says, “Hey boss, I got your text.” Kate’s certain Leo is caught up in one of Viv’s dark twisted schemes. She’s about to call Sonny and the police when Vivian decides to tell all. She reveals she tried to join forces with Victor, who turned her down, so she elected to retaliate. Vivian planted Leo at Titan to get Sonny into bed. Leo reports Sonny broke things off upon hiring him as an assistant, that’s when the plot hit a snag. Kate realizes Viv wanted Leo to file a sexual harassment claim. Vivian sends Leo on his way before offering to cut Kate in. Kate muses it’s an appealing proposition.

More: Louise Sorel’s time as Vivian Alamain up at Days In the hospital, Hope questions why Stefan would confess to Marlena if he’s not guilty – was he protecting someone? Stefan asks about Abigail, but Hope snaps it’s none of his business. She barks at him to stay away from Abigail and Chad, and not to leave town, as she exits. Stefan has no intention of leaving town…at least not without Gabby.

At the SPD, Chad confirms Abigail’s D.I.D. may be connected to Andre’s murder. Abigail needs answers. Marlena appears. She’s thrilled Abigail is back, and assures her they’ll help her. Chad and Marlena step out to her idea for the next step. Marlena meets with Hope, and reveals Chad will have Abigail retrace her steps the night of Andre’s murder. As they talk, Stefan appears and asks, “Where’s Gabby?” Hope says it’s none of his concern, and walks away. Stefan asks Marlena if Gabby’s gone for good. Marlena feels it’s unlikely she’ll return and warns him to let this go.

More: James Reynolds on where to place his Emmy statue

In the parkette, Chad relays Marlena’s idea to Abigail, who remembers Gabi threatening to kill Andre, then deciding to go see Andre herself.

Outside Andre’s office, Abigail flashes to listening through the door as Andre agonized about lying to Kate due to the need to return the company to its rightful owner. Abigail informs Chad, “Andre betrayed us.” She reveals Andre was talking to Tony’s urn and admitted to working with Vivian and using inside information to sabotage DiMera. She flashes to confronting Andre, who confessed to her. Andre lamented being brushed aside for ‘Golden Boy’ Chad so unfairly, then explained why he couldn’t work with his idealistic brother. Andre confirmed he teamed up with Vivian to take over the company. Abigail lashed out at Andre, who wouldn’t allow her to leave when she announced she was going to tell Chad.

At the SPD, Marlena updates Hope that Chad and Abigail are at the DiMera offices; she’ll soon remember that night. Stefan overhears, and leaves, taking something from the visiting room.

At DiMera, Abigail flashes back to physically struggling with Andre, then bashing his head with an object when he refused to let her leave,as she’d destroy his life. Chad’s alarmed when she cries out. Abigail then recalls Andre saying, “I love you,” before dying. Chad holds Abigail, who becomes hysterical as she exclaims, “I did it. Oh my God I killed Andre!”

At the square, Will and Paul discuss Leo. Paul reveals he’s still investigating for Kate, who warned they have to be discreet as Vivian may be onto them. Sonny appears, and demands Paul back off on Leo – his connection to Vivian is non-existent. He defends Leo’s character and reiterates he’d never have anything to do with Vivian Alamain. Paul is apologizing for upsetting Sonny when Leo arrives. Leo and Sonny go to eat. Will and Paul hope Sonny won’t get hurt. Nearby, Sonny tells Leo it was easier seeing his exes together when he thought he was moving on…with him. Leo shrugs. “You still can.” They kiss.

Abigail Learns She Has Multiple...