Abigail Learns She Has Multiple Personalities

Monday May 7, 2018: In today's Days of our Lives recap, Steve threatens Stefan, Kate opens up to Marlena, and Brady's close call affects Eve. 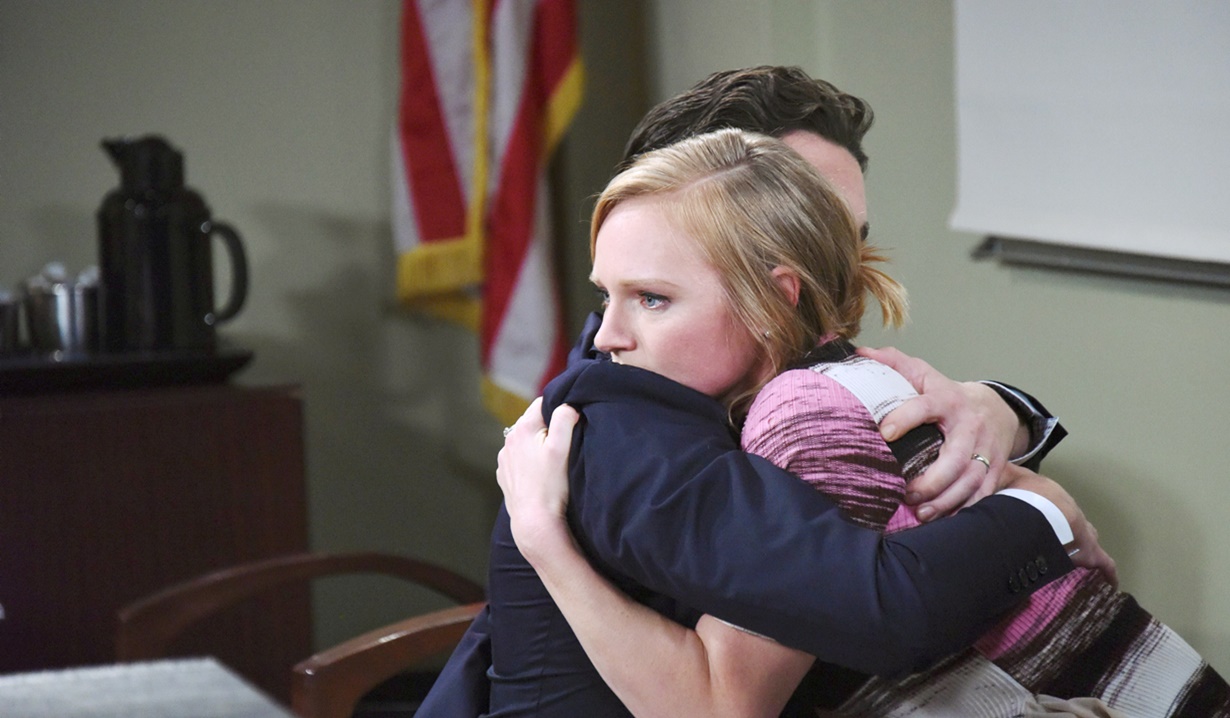 At the SPD, Abigail and Chad happily embrace. She rants about thinking she was in Marlena’s office and wonders what’s wrong with her. Chad’s reassuring, but Abigail wants to call Marlena. Chad says he can explain and tells her she has Disassociate Identity Disorder or multiple personalities. Chad fills her in on Laura being the ‘gatekeeper’, and Abigail wonders what she protects her from. Chad confirms he’s met her alters, Laura and Gabby. Abigail recalls a couple episodes with Stefan O and feels she’d never cheat on Chad. He flashes to finding them in bed together. Chad recalls Marlena’s advice not to upset Abigail. He relays that Stefan O was the first to know about her illness and took advantage of it. Chad hurts because he doesn’t know what to do. They embrace again.

In the hospital, Stefan dreams of kissing Gabigail. He awakens as Steve enters and closes the blinds. He pushes his cane into Stefan’s chest and orders him to stay away from his niece – he raped her. Stefan argues they don’t get to choose who they love. Steve’s convinced he brainwashed Abigail, and complains about Stefan breaking up a marriage and destroying a family – he has no conscience like his father. Stefan claims he simply fell in love, but Steve’s not buying it. Stefan questions if Chad’s the right man for Steve’s niece, who begged him to save her. Elsewhere, Brady tells Eve how good they are together and asks for another chance. Eve’s reluctant as she’s been hurt a lot. Suddenly, Brady clutches his chest and falls unconscious. Eve screams for help. Kayla arrives, orders a VTEC, then sends Eve out. In the waiting area, Eve flashes to Brady proposing. Kayla appears – Brady’s stabilized. She thinks he had a delayed reaction to the drug he was given, but can’t guarantee he’ll be all right. Eve rejoins Brady. She’s rattled from almost losing him and realizes he’s in her heart. They express their love. Eve won’t forgive him if he up and dies on her. Brady assures her he’s not going anywhere. They kiss.

In Mexico, Theresa warns Chloe, who is impatient to escape, that they’re stuck there. She wants to hear more about Brady and Eve. Chloe brings Theresa up to speed on Eve’s return following Deimos’ murder – she had a claim on his inheritance…as his widow. Theresa presumes Eve married Deimos for money, which is why she’s with Brady. Chloe reports Brady actually duped Eve before they fell in love. Theresa recaps that she had to leave or Mateo would kill Brady and Tate. Chloe thinks Eve and Brady shared the pain of what Theresa had done. Theresa ruminates about finding a way back to Brady and Tate, so no one else would call Tate ‘Mom’, let alone Eve. Chloe reports Eve split with Brady, though he wasn’t giving up. She thinks if Theresa returns, he’ll forget all about Eve.

At the DiMera mansion, Marlena updates Kate that Chad was trying to force Dr. Laura to let him speak to Abigail. Kate hopes if he gets through to her, she’ll be strong enough to handle the information. Marlena, when asked, doesn’t have any answers about how they’ll heal after what they’ve been through. She notes Kate will have to deal with what Vivian said about Andre planning to install Stefan. Marlena wonders if Vivian was lying, but Kate’s not surprised he would double-cross her; she saw signs but dropped her guard. She reveals she couldn’t tell Chad what Vivian said, and laments that Andre never loved her. Marlena understands why it hurt for Kate to learn Andre had conspired with Vivian against her. Kate wonders if it was actually Vivian’s idea for Andre to deepen his relationship with Kate – she’ll kill her. Marlena suggests they work this out in her office and will keep Kate posted. Once alone, Kate talks to Stefano’s portrait about hate being easier than love – just wait until she gets her hands on Vivian. Suddenly, Viv appears and asks if she’s talking to the walls again. Kate says, “I was talking to him, and now I’m talking to you.”

At the SPD, Marlena receives an update on Brady from Kayla, and remarks that Chad’s in with Abigail. They reflect on Stefan O being like his father. Kayla hopes Abigail will gain strength from Chad’s love. Elsewhere, Abigail can’t understand why the D.I.D. happened, but realizes Chad knows. He gently explains they believe it started the night Andre was murdered.

Kayla joins Steve in Stefan’s room and reiterates that he raped Abigail, who was ill. Steve orders him again to stay away from his niece. As they leave, Stefan murmurs, “We’ll see about that, won’t we?”